May 4th is remembrance day in the Netherlands

May 4, eight pm, 2 min.silence, in The Netherlands.

When the Dutch talk about the war they mean the war against Germany (Hitler). And even though this war ended so long ago, the Dutch public don't want to forget.( Just like the Dutch from The Dutch East Indies, who won't forget about the War with Japan. (Emperor Hirohito). The sad thing is that when you ask about World War 2, most Dutch only talk about the Germans, and what happened in Europe.
Four out of every five Dutch citizens think it is important to commemorate the dead and celebrate liberation day each year, even when there is no one left alive who experienced the war firsthand. As the number of people who actually lived through the war dwindles, the committee regularly holds a survey to test whether there is still adequate support for the annual remembrance day. And the level of support is overwhelming: 86 percent of those interviewed think the commemoration of the victims of World War 2 is important, and 78 percent feel the same way about the annual celebration of the liberation of Holland, even after the last of the survivors has passed away. 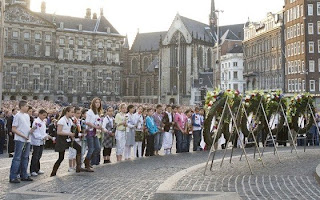 May 4 , remembrance day, and liberation day in  the Netherlands, freed from their occupiers the Germans.
For the Dutch in the Dutch East Indies, liberation day did not come until the 15th of August 1945, although the Japanese did not tell us until the end of August.
I remember my mother always being so sad that day. I now understand why. But now I understand that the 2 minute silence were her memories, about her husband (my father) who had died on that terrible infamous railroad track and she trying to survive in Japanese prison camp in the Dutch-East Indies.Every year on May 4,a sadness came over her. She must have felt very lonely. Never anyone spoke about what they had endured. It was as if it had never happened.It was like there only had been one war in Europe, against the Germans.Never in the Netherlands was spoken about the war in the Pacific.Freedom for the people in the far east did not come until August 1945, and after they were freed from the Japanese occupancy, it was not over for them. Now a civil war broke out in the Dutch East Indies, called "The Bersiap".Indonesia wanted to be Independent.Many Dutch were murdered during that time, it was a very dangerous time. How they must have suffered. Mom I love you, I know that you are at peace.