Our monthly demonstration in The Hague.


The Hague, 10 December 2013.
Petition: 229
Subject: Renewal of the Dialogue upon the arrival of the new Japanese Ambassador to The Hague.

The Foundation of Japanese Honorary Debts has presented many petitions to Prime Ministers of Japan conveying the same message:
Requesting Japan to show its moral responsibility for the remorseless brutalities by the Japanese military conducted during their occupation of the former Dutch East Indies from 1942 till 1945.
Despite the desire expressed by Japan's Ambassadors in The Hague to maintain a dialogue with the Dutch from the former Dutch East Indies represented by the Foundation of Japanese Honorary Debts, these petitions were never acknowledged and the message ignored. Moral responsibility is not a legal matter, but a matter of conscience and principal. It is the way in which we respect each other, admit our mistakes and crimes, apologize and compensate for the ill feelings and damage done. A genuine dialogue between Japan and the Foundation is required in establishing mutual understanding and acceptance.

Prime Minister,
Compare Japan with Germany. After World War Two Germany realized how the individual survivors suffered and what they lost as result of the war which Germany started. Without pressure from the Allies, Germany accepted moral responsibility, offered their apologies and compensated the damages inflicted by the German military and their political systems.Germany did this generously and without hesitation. Despite haunting memories and unrepairable damages to health and property the efforts made by Germany were accepted by the victims. Germany is respected as a nation of conscience and principals. They enjoy a status of respect and reliability.

Japan could be in a similar position by accepting moral responsibility. It would be appropriate for you to understand the meaning of the more than 200 petitions presented to Japan's Prime Ministers since 1993.

Prime Minister,
A new Ambassador of Japan to the Kingdom of The Netherlands has been appointed. His Excellency Masaru Tsuji must be given time to read our previous petitions. In particular the last 50 petitions, which outline our suggestions, are essential for a meaningful dialogue. As a matter of goodwill and conscience we ask you strenuously to provide the new Ambassador with new instructions so that we can seek jointly for an appropriate and creative solution.

Prime Minister,
In the meantime, as already requested in our previous petition 228, may we ask you to stop visiting the Yasukuni Shrine. You should not honor convicted war criminals! Stop hurting the millions of people who still suffer from the after effects of the Second World War started by Japan.

We would welcome an acknowledgement of receipt of this petition by you personally.


The demonstration in The Hague finds place every second Tuesday of the month in front of the Japanese Embassy.

Our business with Japan is unfinished, and will remain so until the Japanese government fully accepts it quilt and tells its people what was done in their name during World War Two.

Young men and soldiers were swept into the now largely forgotten Asian holocaust, perpetrated by Japan's militarist leaders. These men were not just prisoners but slaves during Japan's aggression in the South-East Asian region, forced to be a vital part of the Emperor's war effort.
Forced to build the infamous railroad through the jungles of Burma and Thailand.Daily beatings and many days working 18 hours a day with very little food and water. Many of them passed away ,either to diseases and total exhaustion or beheading, which your military enjoyed.Death was visiting them every day. Japan did not care, there were many to replace them. My father died on September 18, 1943, just a couple of weeks short, when the railway line was ready for use. The ones who made it were send to another project and to the Japanese factories, Mitsubitshi, Daihatsu, etc,and into the mines of Japan.How these men suffered.When Japan was defeated these men were skeletons. The war should not have lasted another two weeks, because none of them would have survived. The Japanese were planning to kill them all, the prisoners had already dug their own mass graves.The date for the mass killings, women, children and men was set for 26 August, 1945. The A-bombs saved us. Dropped on Hiroshima and Nagasaki.The Emperor Hirohito offered his own people, they were warned and ignored it.

Women and children were put behind barbwire and high fences. Forced into sex slavery (comfort women) my mother and her sister were one of them. They were misused while in camp Moentilan, and in all places in a church on the property of this concentration camp. Its a miracle my mother and her sister survived.The rest of their lives they had to deal with what had happened to them during those three and a half year when Japan's military tortured, worked, and starved and raped them. Innocent women and children, for who the Japanese military had no respect.Many women and children died in these camps. The ones who survived had to deal the rest of their lives with the trauma's the Japanese military inflicted on them.
Moral responsibility and respect is not too much to ask for. How much longer do we the survivors have to ask for genuine apology and compensation for the damage done to us.Not only to the victims who were there but to their children and grandchildren, who have to deal with the trauma's their parents suffered. 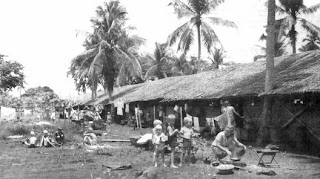 My mother passed away in 2003, and her sister in 1990, but we the children who were in these camps will never stop these petitions. We have the utmost respect for our mothers, who did everything in their power to keep us alive in these camps. After the war my mother did everything in her power to try to let me forget, about what I had seen. Whenever I questioned my mother about an incident I could not get out of head, she would say that I had dreamed it. She always told me,' Such things do not happen in real life, you must have had a nightmare".
I  know now that whatever I asked her, I had seen and remembered. I have shed many tears for my mother and her sister and I will always keep writing about that horrible time. People should never forget and always remember so this will never be repeated.
Japan likes to forget, but this business, our business will be unfinished until they accept their guilt.

Lest we forget!
Posted by Thea at 1:21 PM No comments: