Every second Tuesday of each month, a demonstration takes place in front of the Japanese Embassy in The Hague.

This is the 204th petition presented to the Prime Minister of Japan.


His Excellency Yoshihiko Noda
Petition:204
Subject: 7th December 1941--Sorry for what my father had to do in the war.

In the run up to the remembrance of the Japanese attack of Pearl Harbor on the 7th December 1941 the interest in the past is heightened. In particular the third and fourth generation, our grandchildren and their children, question us and want to know what really happened during the Pacific war. Very few of us want to tell them the gruesome details.Their main question is however:"What did Japan do in acknowledging the victims and did they compensate them. Why is it that the Japanese do not find honor to rectify their past?" We make the point however, that we can not hate the present Japanese people; the majority were born after the war ended. We do not respect their politicians who can not recognize the honorary debt Japan has to the war victims and their immediate next of kin.
December 7th. 2011 is the moment that Japan can acknowledge that, 70 years ago, they started the Pacific War. December 7th.2011 is also the moment that Japan honors the victims of that war.Not by a verbal token, but by a genuine gesture as suggested before.

Why is it that our grandchildren and their children are increasingly more interested in the Pacific War? The years have gone by and yet reminders of the war continue to appear in the media. One such item attracted much publicity. Recently, Australian sport-divers found the Dutch submarine K XVI 60 miles North West of Kuching off the Sarawak coast. On Christmas Eve 1941 she was torpedoed by a Japanese submarine, taking the whole crew down. One of them was the father of a Dutch woman who tried to find out what had happened. From a Japanese logbook she ascertained that the Japanese submarine I-66 had torpedoed the K XVI. End 2002 she visited the Dutch submarine monument in Den Helder where she met Mr. Akira Tsurukame. It turned out that he was looking for evidence what had happened to his father, who was chief engineer on board of the I-66, torpedoed in 1944 by the British submarine Telemachus. After their meeting Mr. Tsurukame visited the home of the Dutch woman and saw a picture of her father. He preyed and said"Sorry for what my father had to do in the war". The two became friends and continue to communicate.

It shows what many of us believe: the Japanese people are able to say sorry, but the politicians do not have the courage to do so and face the consequences. We hope that you have the courage.
On behalf of the Foundation of Japanese Honorary Debts, 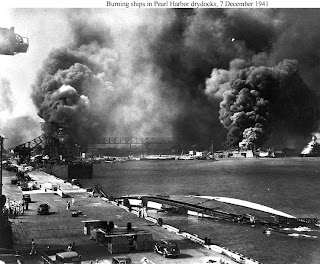