Thailand, research work, uncovering the location of the abandoned section of the railway.

To-day is November 10 and I decided to write on my blog. It is getting cool outdoors and my husband and I just finished the last garden duties, ready for the winter. We are not looking forward to it. We took a few pictures from the trees in our backyard, and I like to share these with you.

Life is beautiful, I feel sad that so many young people still die everyday. When is the world going to stop fighting each other.
This poem written by : WIN RAINER


Can anyone forget the war
The principles worth fighting for,
Can we ever accept loss of life
The sadness and emptiness of a wife.
Times are changing that we know
Leave our young in Peace to grow
How can they achieve and understand
Any nation over land.
Power is a mighty blade
That never achieved any grade,
Young people have the right
To their life without a fight.
To make their way in Peace
War is nobodies release.


I got carried away with my pictures, I was suppose to write about an article I saw, about Rod Beattie, who is doing a phenomenal  job, uncovering the sections of the railway and the former campsites, from world war2.


RESEARCH WORK
This is what I read:

The instigator and driving force behind the Centers research work is long-time Kanchanaburi resident Rod Beattie, now the Centers Museum Curator. Originally from Queensland, Australia, Rod has spent much of the last 15 years uncovering the location of the abandoned section of the railway and former campsites.

Having met and talked with a large number of former prisoners of war or members of their families and having read widely of the subject, two factors became apparent to Rod.

Firstly there is a great need to provide the answers to the most asked questions from visitors coming to Kanchanaburi."My father (grandfather, brother, uncle) died on the railway. Where? When? How?" Apart from a few unit histories (official and unofficial) and an equally small number of books providing details of small groups of soldiers, there has been no serious attempt to provide the answers which would give a great deal of comfort to the relatives of more than 15.0000 allied personnel who died whilst prisoners of war, working on the railway, or after wards.

The start to answering these questions is to know exactly where the railway ran, and where all of the numerous camps were located. To this end Rod has spent much of the past 10 years locating all of the accessible abandoned railway in Thailand, including long sections which are normally covered by waters of the Wachiralongkorn Dam. 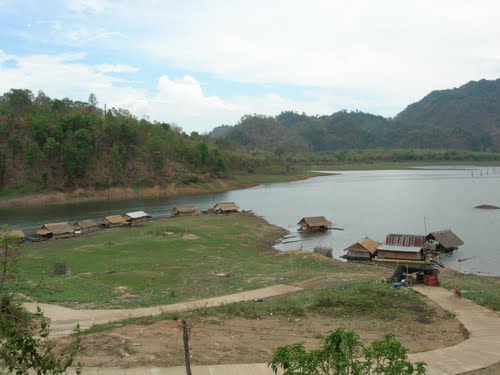 The second phase of this research work was the drawing of perhaps the first comprehensive map of the full length of the railway. This map shows the location of all railway stations, camps and any other points of major interest. Concurrent with this work has been the collection and collation of the records kept by the prisoner of war camp administrations, and many other documents which provide information as to the movement and fate of POW's. Since these records are held in archives scattered all around the world, there has been, and continues to be, considerable time and money spent in compiling the database.

The second factor which has become very apparent is how little of the full story about the railway is known. Many of the books published about the railway are personal accounts, and as such tell of the author's own experiences and/or that of their immediate comrades. It is known that many of senior POW officers wrote official reports of events which took place on the railway. These reports, which were collected and collated post war, lie largely unread in the archives around the World.

We aim to make the information contained in some of these files and reports easily available to the public for the first time. It may be that these reports will show that many of the factors which create difficulties between different peoples even today (cultural and ethnic differences, education,religion and simple misunderstanding) were partly to blame for the tragedy of the railway experience. At the very least it will provide a much wider view of events than has been possible until now.

Another area is to collect the stories of as many of the survivors of the railway as possible.Previously this has received very little attention but is now becoming urgent. It is planned to interview prisoners of war and other survivors to record their experiences.
These are the men who were on the railway and their information is invaluable. It has been through talking to former prisoners of war and taking a number of them back to the railway that numerous relics recovered from the abandoned railway have been identified and several campsites have been positively and accurately located. 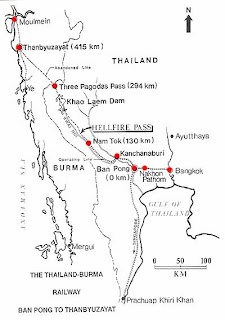 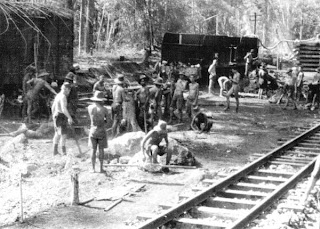 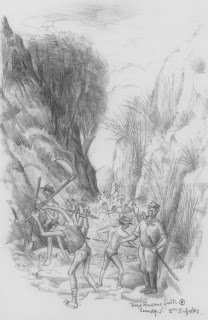 The brutal work on this 415 kilometer-long railway began on September 16 1942 and ended 16 month later in 1944. Sixteen thousand prisoners of war and some 100.000 forced laborers from Thailand,(Indonesia Romushas), Burma and Malaysia died from exhaustion, disease and malnutrition. This part of history must not be forgotten, because it can teach us an important lesson and ensure that such acts of violence are never repeated.

What remains of the work carried out by these prisoners of war are the traces that point to their stay there. 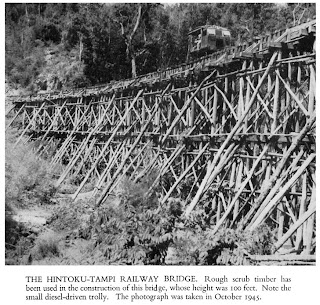 Each day men suffered
Each night their was death
People cried to get freedom
But the Earth turned the color red.....

This is written by a young girl, Marlies Liket. 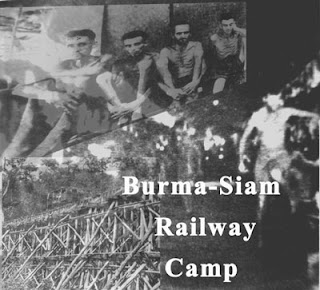 IN HELL THERE IS A PLACE CALLED DEATH'S RAILWAY.

Although I can understand how one feels about the experience POW's had, and how POW's believe that one should forgive, I believe that I'd have to go along with the POW's, and say that there is just too much to remember. However, I don't think one should carry the remembering so far that they would exclude the newer generation from acts of friendship, or hold them responsible for the acts of their fallen fathers. But, as you well know, all the forgiving, all the forgetting, and all thoughts and acts of friendship has to be done on an individual basis. I suppose what I'm trying to say is: regardless of how one feels as an individual, we who were Japanese POW's must make every effort to see that it doesn't happen ever again.

Written by a POW.