Excellency,
We remember the 15th of August 1945 as the day that Emperor Hirohito ordered his Imperial Army to cease the fighting and to surrender. For the then surviving Dutch Prisoners the news of the Japanese surrender came later, but they were liberated. They were kept in the concentration camps. Those outside the camps were subjected to further terror by the Japanese invoked Indonesian revolutionaries. On the 15th of August we remember the dead and the sufferings we endured. We are supposed to celebrate the end of the war. The truth is that those who survived and are still alive fully remember their fate at the hands of the Japanese military and the follow on of the Indonesian revolutionaries. But at the ceremonies they remember their lost ones. In particular how their lives ended through execution, torture, starvation, illnesses and lack of medicine and hygiene.For many of the survivors the end of the war meant a new challenge to survive. They had to move on for themselves, for their families and their children in particular and for their parents who lost all. They cannot forget and subsequently do not have respect for Japans' failure to acknowledge their war past and their moral responsibilities.

Prime Minister,
In this context it is outrageous that your government does not accept the advice of the UN Human Rights Council to acknowledge responsibility for the Comfort Women issues. It was possible the last opportunity for your government to do so honorably, in demonstrating Japan's sincerity to resolve the issues.The world will not forget Japans' refusal to follow the UN Human Rights Council advise. It will question Japans' standing as a responsible compassionate member of the international community, the United Nations.How remorseful is Japan for its past behavior? How long can you maintain this position of historical denial? How will Japanese voters react to the shame? The world is not all about economics and commerce, but it is ultimately about integrity in accepting history and humanity.

Prime Minister,
The MH17 plane disaster confronted the people of The Netherlands with the importance of the United Nations in maintaining an international community with respect for humanity and integrity. The pictures of the disaster site and the disrespect for the remains of the victims will be remembered always. His Excellency Mr. Timmermans, the Dutch Minister of Foreign Affairs, made the feelings and the disgust of the Dutch very clear in his speech to the UN Security Council. At this raw time for the Dutch Japan's disregard for its obligations to both the Dutch and the wider UN is unacceptable.

On behalf of the Foundation of Honorary Debts.

GENEVA (6 August 2014)- United Nations High Commissioner for Human Rights Navi Pillay on Wednesday expressed profound regret that Japan had failed to pursue a comprehensive, impartial and lasting resolution of the issue of wartime sexual slavery, warning that the human rights of the victims, known as "comfort women", continued to be violated decades after the end of the Second World War.

"During my visit to Japan in 2010, I appealed to the Government to provide effective redress to the victims of wartime sexual slavery," the High Commissioner said."Now, as my tenure in office comes to an end, it pains me to see that these courageous women, who have been fighting for their rights, are passing away one by one, without their rights restored and without receiving the reparation to which they are entitled."

"This is not an issue relegated to history. It is a current issue, as human rights violations against these women continue to occur as long as their rights to justice and reparations are not realized," she stressed.

Instead of justice, the High Commissioner said, the women were facing increasing denials and degrading remarks by public figures in Japan. A report issued by a Government-appointed study team on 20 June 2014, stated that "it was not possible to confirm that women were forcefully recruited." Following the release of this report, a group in Tokyo publicly declared that "comfort women" were not sex slaves but wartime prostitutes."

"Such statements must cause tremendous agony to the women, but we have not seen any public rebuttal by the Government,"High Commissioner Pillay said.

Over the years, Japan has received recommendations from a number of United Nations independent experts, human rights treaty bodies and from the Human Rights Council under its Universal Periodic Review for it to take concrete measures to tackle the issue. Most recently, the United Nations Human Rights Committee, which oversees implementation of the International Covenant on Civil and Political Rights, called on Japan to take "immediate and effective legislative and administrative measures" to ensure that all allegations of sexual slavery are investigated and perpetrators prosecuted. It also called for access to justice and reparations for victims and their families, the disclosure of all evidence available, and education in the country surrounding the issue.

Pillay noted that Japan had signed the United Nations Declaration on the Prevention of Sexual Violence in Conflict last year and that it had offered strong support to the UK summit on sexual violence in conflict earlier this year.


This picture was taken just before the capitulation of the former Dutch East Indies. My mother and me, her sister and two children were soon there after taken to a so called protection camp. The Japanese had told them that they would be safe in these camps.. It turned out to be three and half years of hell. Locked up, not knowing what was going on outside their prison walls , with hundreds of other women and children.The atrocities they underwent while in these camps are almost not to describe.
My mother changed from a very happy young woman to a very sad woman. Like her sister they suffered tremendously at the hands of their captures. The Japanese military were cruel. I see them as monsters, who did what they liked. They behaved worse than animals.
This Japanese government has to come to terms with their past. They cannot keep glorifying their war heroes in the Shrine.Many of these war heroes were full blooded murderers.
I am angry at the Japanese government of today, how they handle the atrocities from the past. The Japanese government should be ashamed, to tel lies to their people. You are a bad example for the future generation of Japan. Japan prospered after the war, and the victims had to fend for themselves. The war was never over for them. They relived it over and over in their nightmares what your Military had done to them.We were lucky to be alive when the war was finally over. Your Emperor Hirohito had given the order to kill all POWs, women and children, so they would not be able to tell what they had endured. You were stopped by the A-Bombs on Hiroshima and Nagasaki. Otherwise we would have been all murdered. Are you Japan going to say that this is a lie too? I am angry at the Japanese government of today, how they handle the atrocities from the past. I am angry at Japan that they say that we are the liars. I am angry at Japan that they deny what their forefathers have done to innocent people. They raped our mothers and sisters, they starved and worked us to death.  Shame on you!! I wonder if this Japanese government is ever going to take the blame.How long are the Japanese youth going to  follow the traditional culture of their parents, in which they glorify their past??  It makes me sad to think what this nation is being told by their government and their parents.Nothing but lies! 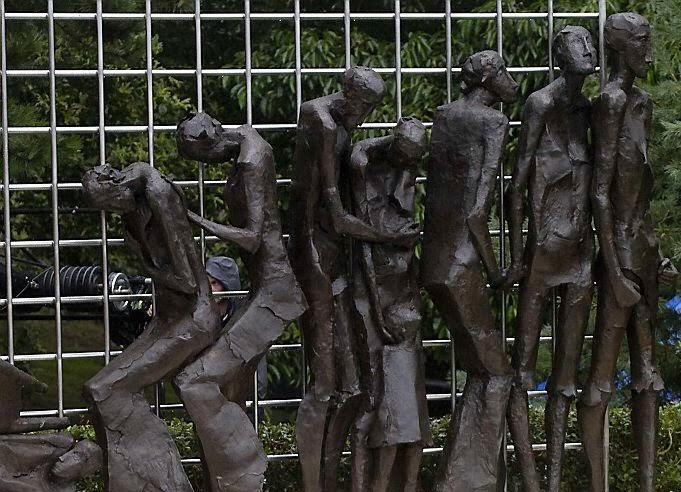 Today it has been 69 years ago that we were free. Freed from our tyrants the Japanese Forces who occupied the former Dutch East Indies.For three and a half years they kept us behind barbwire and high fences. They had driven us from our homes, separated the men from the women and children and tortured, starved, used us for slave labor and raped the women.
Those who survived remember and feel their sufferings at the hands of the Japanese military and their agency still every day.
With pain and sorrow we will remember those who lost their lives at the hands of these barbaric Japanese Forces.
When I see the daily news on TV, I see that history repeat itself over and over again.I see the people being forced to flee from ISIS. I see men,women and children fleeing for their lives, driven from their homes. It's so terrible sad, but at least the world can see what is happening there. I think about my mother how she was forced out of her home and separated from her husband with thousands and thousands of other women and children. Being told by the Japanese forces that they were now the property of Japan and better obey by their rules, otherwise they would be killed.There was no food and water from the United States, no aid from the air. The United States themselves were at war with Japan. We were on our own. It's very sad to see these people now being stranded in refugee camps, but at least they are not terrorized anymore.I see small children and babies in their mothers arms and see myself. I was only one and a half year old and spend the next three and a half year growing up in a concentration camp terrorized by Japanese men, seeing the most awful things. After the war I was terrified of men, and thought I had to bow for them, otherwise my mother would be punished. We were held in concentration camps,captured and robbed from our freedom by the Japanese for three and a half year. There was no TV for the world to see what these barbaric Japanese military did to us.
Every second Tuesday of the month, we demonstrate in front of the Japanese Embassy in The Hague in the Netherlands for recognition for  what their Japanese military had done to us.How many more years we have to do this and continue to feel the pain since the capitulation of Japan on August 15,1945.Japan keeps denying their wrong doings during World War Two.We hope to live and see the day that we can put the past to rest.