Before I begin with my story about my mother and I returning to Holland, from Indonesia , I like to comment about a letter my mother received from Queen Wilhelmina from Holland.I wondered why not many letters like this have surfaced. I remembered that my mother once had told me that she had this letter, although she never showed it to me. She told me at the time that they had been so mad when they received that letter.Lots of women had ripped it up. But I found this letter in a pouch tucked away for many years. I found it when my mother passed away in 2003.This is the letter which was in that pouch with many more letters . 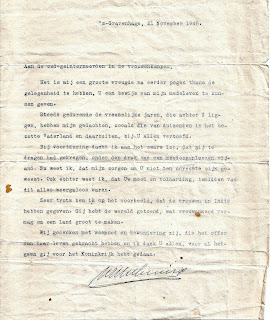 To the old-interned who were in Japanese Women Camp,

It is with great pleasure, after numerous tries, to have the ability to let you know, that I have always thought about you.
All the time during these terrible years, which are now behind us.( Oh yes, really???You damn well know we are caught in the middle off this New War) my thoughts as well as those of thousands in occupied Holland and outside of here, always were thinking about you.
All the time my thoughts were with them who had to carry this heavy load. Occupied by these ruthless enemies. I know now, that my worries about you all were not injustice at all. Also I know that your courage and persevering in the midst of all this were unparalleled.
I am extremely proud for the example the women in Indonesia were for us. You have showed the world how courageous you were and showed the world how big and proud you make your Country.
We commemorate with great sadness and admiration, those who offered their lives.
I thank you all for what you have done for our Kingdom
Signed: Wilhelmina
Queen of the Netherlands.

The most hypocritical letter my mother ever received. The Queen knew that we were in the midst of a Civil War, we were not free. We were still in extreme danger, it was not over for us... These were words and only words written on a piece of paper. Why not write that she was sorry that we were still caught in the midst of this new war, and sorry that our suffering was not over jet? Why not say that Holland would do anything to make it up to them, for all their losses.

After world war 2 the Dutch were caught in this Civil War, between the Dutch and the Extremists who were fighting for a Republic Indonesia.For five more years the fighting went on..
The UN security Counsel demanded release of the Republican government, and independence for Indonesia. All Europeans had to leave this country, they so dearly loved.
The Netherlands tried to shovel this under the carpet for years.

We arrived in Holland with only some clothes on our backs.It was the Dutch Government in exile(London)on behalf of The Dutch-Indies, who declared war to Japan, together with the Allied. The Dutch-Indies was forced to fight Japan, for which they were not ready and were not equipped with sufficient weapons. The Dutch civilians suffered immensely.

This quotation from de Stichting Vervolgingsslachtoffers Jappenkamp(the Foundation of victims of Japanese camps)
Never did Holland pay any compensation to the victims from this horrible war. What is the difference between the Jews and Gypsies from Holland who were prisoners of the Nazi's? . Holland does not take any responsibility towards the Prisoners of War who suffered mentally and physical in Japanese Prison Camps and those who lost their lives in the war and during the Bersiap time.
The war declared to Japan by The Dutch reign of Wilhelmina, is responsible for which their country men and women suffered all those years in Japanese Prison Camps. The Netherlands turned their backs on us. The Dutch Government knew that the Dutch citizens and military were in these Prison Camps and that their position was horrible. This is known from radio broadcasts and proclamations from H.M. Queen Wilhelmina 1940-1945.
December 7 1941 (RADIO ORANJE)

.....We did not have to think twice, for one moment to declare war and help fight our confederates, whose business is our business.....

"Speaking about coming together as one Nation, our thoughts are with our oppressed and suffering countrymen in greeter Netherlands under the "Tropics........"

"Countrymen and International Relations"
First of all and everybody in the Dutch-Indies...... your loyalty and firmness will without hesitation be rewarded, and will be well deserved, as Freedom comes, which will come rest assured!"

After the Capitulation of Japan: we who were in internment camps' lost every thing, our bank accounts, our houses, our businesses. We only had left the clothes we worn, all those years in prison. That's all we had left.

Australia, Canada, England, New Zealand and Norway paid their war victims of the Japanese Occupation, with amounts of Euro 18.000.- per victim or heir in 2000 and 2001. It is about time that the Dutch Government follows suit.My mother did not even get the wages from my father which The Netherlands still owed him.
It is time you take responsibility after more then 60 years.

The Prison gates opened for us, but nothing was done to help victims cope with the mental and physical damage done to them, caused by the horrendous torture and suffering they received by their captors the Japanese, whilst imprisoned. They felt abandon and so alone, when they were send to the Netherlands, from the country they loved: The Dutch-Indies.
They arrived in the Netherlands with absolute nothing!

The Foundation is working hard to try to get justice done, and for a justified compensation.

The Foundation is asking people to tell each other, and please sign up.

For more information go to this website: www.svjappenkamp.nl
Posted by Thea at 9:48 AM 2 comments: