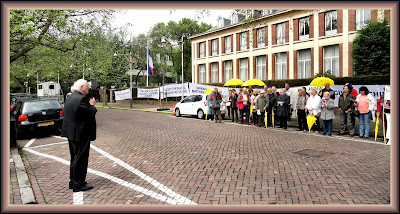 His Excellency Shinzo Abe
Prime Minister of Japan
The Hague September 8,2015
Petition: 250
Subject: WHAT NEXT?

Your statement on Friday, August 14th, 2015 failed to convince us that Japan is preparing for its future by addressing its military and political past.In your statement on the 70th anniversary of the end of World War Two you admit "that Japan lost sight of the overall trends in the world", Japan's post war population does not know how and why Japan went into war nor that during the war the Imperial forces terrorized POW's and civilians and violated human rights on a grand scale in the occupied territories.Your promises that Japan "will engrave in our hearts" is insufficient and offensive considering the sufferings of the victims of terror and plunder which took place. Japan started the war and its military terrorized and violated the laws of war. However you are right in stating that "prosperity is the very foundation for peace", to which one must add accepting responsibility for past wrongdoings. Hence the Foundation of Japanese Honorary Debts continuous demand that Japan recognize its moral responsibility stemming from Japan's "wrong course  advances along the road of war."

Prime Minister,
This is the Foundation's 250th petition to the Prime Minister of Japan in the last 25 years. The tone and contents of all previous petitions have been to reconcile on the basis that the Dutch victims of Japanese militarism are respected and reasonably redressed. Our message continues to be that Japan must accept moral responsibility for its military and political past during World War Two. The Foundation of Honorary Debts has the will and the means to reconcile on behalf of the Dutch who suffered from Japan's military occupation of Dutch East Indies during World War Two.

Your statement of the 70th anniversary offers possibilities, if you have the will and genuine commitment to reconcile. Demonstrate your will by starting to acknowledge the receipt of the 250th petition. 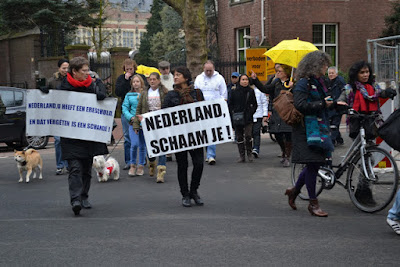 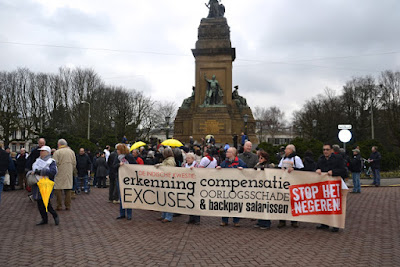 A message from the president,

Yes it has been 70 years ago that we were freed from our tyrants the Japanese military. Peace came with happiness and sadness. So many had not made it. Another difficult time was in store for all of us. Many had to deal with the knowledge that their husbands, father of your children, your wife, your brother or your sister your uncle or your aunt your grandmother or your grand father did not survive,and you were never going to see them again.
What next... so many of you said.. How are we going to get on? We have no houses to go back to and no jobs.From one atrocity to jet another one. Every thing we ever owed was lost and there sure was no help to expect. We stood there with empty hands and we felt totally lost. We felt we were the forgotten ones and some how we had to start over again. The chaos was tremendous and overwhelming., "peace" we did not knew it existed, the Bersiap had started and we were in the middle of it. The little bit we still had at that time,was lost too. The fathers and mothers who survived all these atrocities and made it out alive, never knew how to celebrate the 15th of August.  All what they thought about was the loss of their loved ones and a deep sadness was all they felt.

What does it mean to remember? Do you have to stand still and think about all the sadness and the loved ones you had lost. Do we have to be angry, because we were the forgotten ones. Or do we have to think of all the good things we had when all was still okay. Our "Memorial monument" we carry in our hearts, sometimes we share it with our friends, but everyone tries to deal with it in their own way.

As a donor and president of the Foundation of  Japanese Honorary Debts I often think about how courageous  the war victims from the Dutch Indies picked up the pieces and started a new life. But  I am also thinking about those who were so damaged, mentally and physically that it was impossible for them to start a new life again. Also the knowledge and lack of comprehension, specially from the Japanese authorities and politicians for their moral responsibility to recognize that Japan with their Imperial military army had inflicted  so many atrocities to the Dutch in the former Dutch Indies, and should therefor still be responsible for all the atrocities they inflicted on human beings during that time.

The 1951 San Francisco Peace Treaty, is never going to allow Japan from their moral responsibilities, until they except recognition and reparations of the harm which Japan and specially their Imperial army have inflicted on human beings.

Even the the government of The Netherlands has their responsibilities about this. Right after the capitulation of Japan there were words full of compassion and understanding. But even then the war victims were totally left on their own in their  fatherland, and totally forgotten. The behaviour of the then Dutch government and the self-seeking in neglecting  and denying their responsibility is probably the blackest page in solidary history of the Kingdom of the Netherlands. The anger, the disbelief, about incomprehension from politicians, media and the Dutch people, is still to be felt under the Dutch Indies people. This anger will never leave us until the present Dutch government  and politicians recognizes the moral responsibilities of the terrible injustice, harm and material damage has affected the people from the Dutch Indies: its called"Honorary Debt". Maybe this August 15th, 70 years after the Japanese capitulation, the present-day  administration and politicians come to search their own hearts and will be ashamed about the lack of involvement with their fellow-country-men from the former Dutch East Indies.

Its about a comprehension explanation of recognition and excuses with compensation.The way this will take place could set a sample for the present Japanese administration and politicians.The Japanese industry seems to have taken their responsibilities. But also the media in the Netherlands and Japan have a responsibility to give more attention for the" Dutch Indies grief".
The war victims and next of kin will fight the good fight for recognition and reparations.

This message was written in Dutch in our magazine. I hope that I did not make too many mistakes in translating it in English.