Demonstration in The Hague. Petition 249

Petition 249; The moral way to acknowledge and pay respect to history. 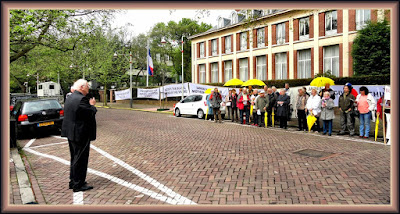 The Hague, 11 August 2015
Petition: 249
Subject; The moral way to acknowledge and pay respect to history.

On the 15th of August 2015, you will be judged on your anniversary statement. Judged as to wether you are a true globally accepted statesman who is preparing Japan for its future by addressing its history, its moral responsibilities for past war atrocities and the consequences thereof. Or are you trapped in your personal past and political position by former apologies that lacked the acceptance of responsibilities and reparations? In this milestone year Japan cannot hide behind the legal defense of the San Francisco Peace Treaty; you must surely feel morally obliged to consider the cruel experience of the victims of Japanese military terror.

In our petition 247 we stated that Japan's wartime legacy will continue to haunt Japan now and in the future. The economic costs to Japan and its people in denying the past are substantial both in lost opportunities as well as in self-defense. You as Prime Minister of Japan on the occasion of the 70th anniversary of the end of World War Two are in the position together with unanimous support of both,Houses of the Diet, to acknowledge and redress the past honorably and sustainably.

Mitsubishi Materials Corporation offered the most remorseful apology to the POW's from the USA, who suffered harsh, severe hardship while forced to work in Mitsubishi mines and industrial plants. An unprecedented apology from  major Japanese company. Mr. Yukio Okamoto, an outside board member of the company, sought forgiveness for not apologizing earlier. In a further statement Mitsubishi Materials hopes also to apologize to former British, Dutch and Australian World War Two POW"s, and reach an amicable solution with Chinese forced laborers. Mitsubishi's initiative is a loud and clear signal that Japanese companies recognize that the 70th anniversary of the ending of World War Two will scrutinize Japan's attitude in resolving its war time responsibilities. Other Japanese companies cannot ignore Mitsubishi's initiative but will follow suit. Why must they lead and your government follow???
The leaders of Mitsubishi Materials accept moral responsibility for the past as they are part of the global business community and want to survive for the future. On the 70th anniversary it is time for your government to accept the consequences of Japan's World War Two past and finally resolve this unhappy matter!

On behalf of the Foundation of Honorary Debts,

This story was in the Toronto Star this Saturday, 15th of August.The story is about  Dutch women who live in Canada.

Concentration camp survivors tell of 'other war' in the Pacific.

Group convenes on anniversary of Japanese surrender to observe lesser-known horrors of WW2.

Only a month before the Japanese surrender that ended the war in the Pacific, 12 year old Mance de Korte crawled under a fence and crept into the hospital at the infamous Tjideng civilian internment camp near Jakarta, Indonesia.
Inside, she found her mother laying on a hallway floor so ill with dysentery, the girl wasn't sure her mother recognized her or even felt her presence.
But one thing was certain:Suz van de Wetring was dying.
The next morning, her body was put outside the camp gate, sewn into a mat and carted away.
Seventy years later, her 82 year old daughter's still bright blue eyes brim briefly with tears at the memory.
The Mississauga resident remembers her grief as the 70th anniversary of the Japanese surrender on August 15, 1945, approaches.
De Korte wants more Canadians, including her children and grandchildren to understand the Second World War in the Pacific, less known to many Canadians than the war in Europe.

ATROCITIES HAPPENED 'SO MUCH THAT PEOPLE DON'T TALK ABOUT IT,' SURVIVOR SAYS.

Canada sent relatively few troops to the Pacific and, after the war, the North American population was tilted to European ancestry, said writer Ernest Hillen, 81, author of a 1993 memoir, The Way of a Boy,about his childhood in the Japanese camps where the Dutch were imprisoned during the war.
Even those who were children in the camps often carried deep emotional scars their whole lives, he said. The experience left de Korte motherless at 12. Years of poor nutrition also contributed to her younger brother's childhood death after the war, leaving him too weak to fight the infection of appendicitis.
"My mum was only 37 years old, and she was full of life. She could play the piano. She could do anything,:says de Korte.
In four years of Japanese occupation, the trio lived in three concentration camps in the Dutch East Indies(now called Indonesia),on the island of Java.
It was a desperate, brutal, crowded existence.
When the Dutch encountered a Japanese soldier, they were forced to stand at attention and bow. In the early days, small children didn't understand. The mother of a child who failed to comply would be whipped with a guard's belt.
"You only have to see that once , to go out of the way of every Japanese man you see, because you don't want to get a whipping," said de Korte.
Beatings were a daily feature of life in the camps. said Hillen, a Dutch-born Canadian, who lives in Cambridge.
"The slightest offence- not bowing deeply enough or looking at the (Japanese guard) too'straight in the eye- (they) would either just give a woman a couple of slaps or beat the living daylights out of her.
"The air, all those years, was absolutely thick with fear.You were constantly terrified, you were hungry, and you were hot and quite often thirsty and you had wounds, scratches that had become infected," he said.
Throughout their internment de Korte's mother was frequently hospitalized with painful tropical sores on the soles of her feet. Without real shoes, the sores never truly healed. De Korte remembers fashioning make-do footwear from bits of old fabric that could be tied to her mother's feet.
In July 1945 , Tjideng prisoners were summoned to roll call, so the Japanese could count the prisoners to ensure no one had escaped the ghetto's barbed wire and bamboo fence. This time, the inmates were ordered to stand under a brutal sun for what de Korte remembers as two or three days.
Suz could not do it. So a group of women shielded her from the guard's view so she could sit on the ground. Her daughter believes that was when her mother contracted the dysentery that killed her.
De Korte expects her family will join her at the Holland Christian Homes in Brampton on Saturday for a special kampulan- an Indonesian word for a social gathering- comemorating the end of the war.
The memories they will share will be, like de Korte's, recollections of childhood.
"In our case, there is a bond. You come from Indonesia, you're about this age, then you have been where I have been. There's a friendship even if you don't talk about the war."she said.
The August 1945 Society, a survivors group that organized Saturday's kumpulan,has been a healing outlet for Mississauga Wil Moens,85, who also lived in the camps.
When the war ended, he owned only two pairs of shorts. His other clothing had been sold in exchange for small comforts such as hot water in which to make tea in the military barracks where he and his brother were interned.Their father and mother housed in different camps.
Moens remembers years later his grandson lay a commemorative wreath. "He was 12, a child. It was such a shock. I was just at that age on my own," he says.
Boys over 10 and men were separated from women and younger children in the Japanese camps.
Throughout the war, de Korte didn't know where her father, a Dutch school inspector in Sumatra, was being held.
He didn't talk about that time, says de Korte. She has kept a hollowed-out coconut shell that her father sanded smooth on the concrete outside his prison.A bit of wire has been twisted and pried into the shell as a handle for the bowl he used to take his daily camp ration, a tiny bit of rice, some watery soup and a small piece of bread.
"Atrocities happened, especially in the men's camps, and so much that people don't talk about it," she said.
Food became an obsession. Among her father's possessions, de Korte found a sheaf of papers on which were written mouth-watering recipes for which there were no ingredients to prepare.
In Tjideng, hygiene was poor and food was scarce. At the end of the war there were about 10,000 occupants,mostly Dutch women and children, in an area that de Korte compared to Mississauga's Square One shopping centre.
==========================================================

Many are coming forward with their stories. We should never forget the ugly- ness of a war. My mother and her sister lost everything they loved. They lived the rest of their lives trying so desperately to forget the atrocities the Japanese inflicted on them. The Japanese military left them with deep scars. Deep scars they had to live with the rest of their lives. They hardly talked about the things the Japanese had inflicted to them. But my mother remembered and some times she told me things which were in my head. When I was younger she tried to erase all the things I had seen. But we will remember; 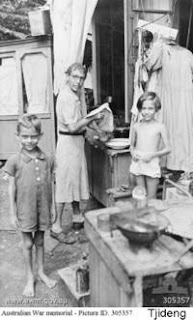 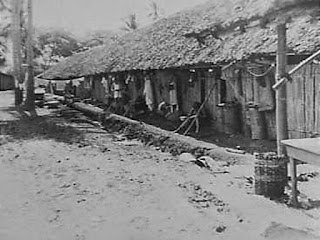 The above picture was taken around September 1946, we were about 4 months back in The Netherlands.I am on the right..We had gained some weight.My cousins are living  in The Netherlands. I talk to my cousin at least once a week on skype. The bond will always be there. Our mothers got a severe beating one day because my cousin and I forgot to bow . They were taken in front of the church which the Japanese used as their offices. There in front of the church our mothers were beaten, their clothes ripped to bits.They were told if their kids ever again did not bow the punishment would be worse.We kids were so scared, every time we saw these screaming men with their big boots and their large swords, we would hide.

I remember the hardship in these awful prison camps,
I remember the hunger and the sounds of the whip,
I remember the ugly screams of the Jap
I remember my friends cries,
I wish I could forget, I try so hard!
It has been so long ago,
I do my best, but I remember still the same,
And it breaks my heart.

Part of my poem I submitted to Poem hunters in 2011.

Lest we forget!
Posted by Thea at 9:34 AM No comments: