A cry of distress from the old-Dutch-Indies people.


The foundation of Japanese Honorary Debts.

STILL PICKING UP THE TAB

Give us something, give us a small box made from mother of pearl . Give us recognition. There is a chance that we will be content.
Please do something.'A cry of distress from the old-Indies- gang.
The foundation of Japanese Honorary Debts repeat this message over and over to the Dutch government. They get support from the Indies Platform. A message from the Dutch who lived in the Dutch Indies and from their offspring.

People who were behind the Dutch interests, or who became a victim from the gruesome war crimes from the Japanese tyrants in World War2. People who also lost House and Home and arrived back in the Netherlands with only the clothes they wore. On top of that they arrived in their fatherland where they were not welcome.Countrymen- who up till now, after 65 years after the war-still not been accepted, and recognized. They insist recognition and an apology from the Netherlands.
After 65 years we are still picking up the tab.

The story from Jan van Wagtendonk (73), president from the Foundation Japanese Honorary Debts, is an example what the Dutch had to endure in now called Indonesia.A poignant example, that still, after so many years after the war, has to be told by a man who finished his academia  education, who made a career with a multinational, who knows Mark Rutte in person and still  knocks on doors which  up to now will not open.

Jan van Wagtendonk was two years old when the war broke out in the Netherlands. He lived with his parents on the island of Java, where his father was administrator on a big plantation. Life of the family Wagtendonk was not complicated, and the future, just as so many of their countrymen in the "East" looked good. Then Japanese warplanes attacked Pearl Harbor on the 7th of December and destroyed the American fleet. From London, where the Dutch government were in exile, the war was declared to Japan.

A period of unknown repression started, after the Japanese troops occupied the Dutch-Indies. The family Wagtendonk were, as well as all the Dutch families, interned in a camp. The little boy Jan van Wagtendonk lost his father and his grandfather, who were against the Japanese,they were beheaded. In prison camp he lost his younger brother.

After years of unbeknown terror,and repression the war ended , and mother and son boarded a ship for repatriates to the Netherlands.They arrived in Dordrecht, where they moved in with their grandmother. But they soon learned that there was not enough money for all of them to live off.

After years of hardships the end of world war 2 came as a salvation and mother and son boarded a ship full off repatriates to the Netherlands. They arrived in the city of Dordrecht where they moved in with his grandmother.But it looked like that there was absolutely nothing to live off. So they had to move to The Haque, where he lived for years with foster parents.After he finished school, he served for the marine, he studied in Rotterdam and worked for Shell where he became a  director ..

His life became a success, but the memories of those horrible years during and after the war, he was not able to forget. That is why he; with great intensity ;works for The Foundation of Japanese Honorary Debts.He put all his effort  towards a resolution for material and immaterial damages brought on by the Japanese military.The Foundation- working on 100.000 Dutch claims- would like to get recognition of the negligence of the interests of the Dutch from the former Dutch Indies. This includes the material damage(loss of property), as well as the never received salaries and pensions.

Van Wagtendonk:" Just put yourself in the shoes of a Dutch -military fighting in Afghanistan, who has been taken prisoner of war, and has regained his freedom after several years.Do you think he has to ask the government for a settling of his wages over the period that he was a prisoner of war?? The government cannot say to him:" You did not work, you have no right to ask for your salary." But this has been done to the Dutch, from the Dutch-Indies, ex-officials, and also to ex-servicemen from the Royal Dutch- Indies army KNIL .

It is time for a compensation." And with this he means that they also should get compensation for war damage inflicted and the loss of  house and home,( which the Dutch in the Netherlands received after the war), in 1951. This was called the Act of  Material War Damage.And they do not expect a compensation of  all missed income, inclusive indexing, over the years they missed. This would cost the Dutch state eighty milliard euro.Jan van Wagtendonk:" They can accept excuses and an acceptable compensation in a honorable way.Preferable not in an envelope, but- as is the customary in the Far- East- in a mother of pearl little box".


My father died as a prisoner of war, fighting for his county. My mother and I were in Japanese prison camps for 31/2 years. We never received compensation,and my mother never received any wages for the time my father was a prisoner of the Japanese in world war2.After the war we could not return to our home, because the Netherlands was fighting this new war. The gates from the prison camps closed on us again. Now we had to be protected from the extremists who were fighting for Independence for Indonesia.Lots of Dutch people lost their lives. This fighting continued till well into 1949. We lost our homes, our bank accounts,all our personal posessions, we had to return to the Netherlands with only some clothes we had worn for three and a half year .I had never worn any shoes, up to the age of 51/2. My first pair I got when we were in Egypt, in Ataka, on our way to Holland. 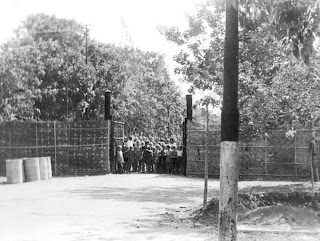 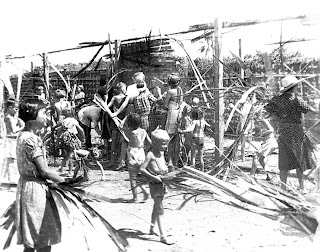 This picture really brings back some memories. I was five years old when my mother, who was very sick than, gave me an old bra and asked me to go to try to trade her bra for some food. She must have been desperate to let me do that. On my way to the fence I passed A Japanese guard and I bowed for him extra deep. He smiled and continued, not thinking that I was going to trade some clothes for food at the fence.There was a hole in the fence, through which the women sometimes traded  clothes with the locals. It was very dangerous to do.If the Japanese guard saw you , everybody in my mothers ward would be punished. But my mother told me later, they were so desperate for some food, that they took big risks. I still can see the fence. I was so proud that I came back with a pisangblad (banana leave). What was I disappointed when my mother opened the banana leave,and she found  a stone.I cried and cried, my mother cried too,but she told me later that she cried because she was so relieved that I was not caught.The punishment for the women would have been severe.

I sincerely hope that one day will come, that the whole world will live in Peace. War is senseless. Life is too short.

War brings nothing but eternal hate,
and a pain that never heals
Wounds that will never seal
War brings a sadness to my heart
A feeling that is so dark
It takes pieces from my soul
War will never let go
War is a pain
It is a loved one lost
A grave that never leaves
Is a broken family,
War is a fight,
A child caught between the crossfire
of a battle called life.
This is a war inside of me
A pain that will never leave
And a war is what it will always be
War is tears ran dry,
and questions, asking, always why?
A loneliness, a need for people
that are never there
War like any other war brings pain!


When my son was little, he often ask me for a toy gun, because all his friends got them. He often said;so and so got  this neat gun from Santa Claus. Yes can you believe it, under the christmas tree.Never did we give our son a toy gun. Now he has children of his own, he does the same. He too will never allow a toy gun in his house.
Sad to say that it is now all these computer games. It makes me shudder inside when I see these young kids playing these games.

War bears childhood fantasies
Toy soldiers for young boys,
Computers now with games,
Destroy with a click of the mouse
'I shoot you down in flames."