Petition 245: Our monthly demonstration in The Hague 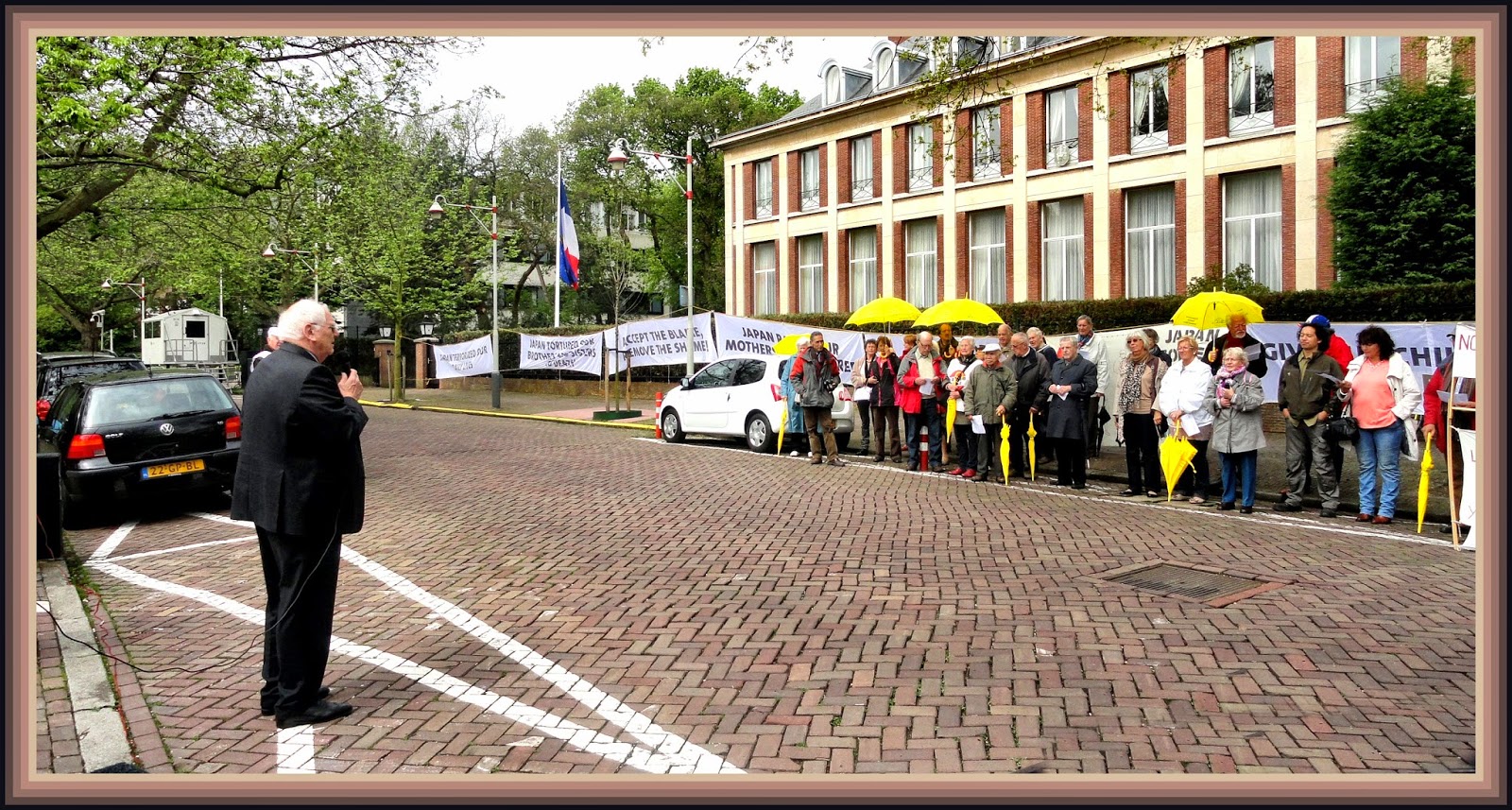 The Foundation of Japanese Honorary Debts was founded on 4 April 1990 for the purpose of looking after the interest of the Dutch East Indies. During the past 25 years the foundation tried to reach an agreement in good faith and trust with you and your predecessors. On the basis of acknowledgement and mutual respect we will continue to convince you that Japan has a lasting moral obligation towards the Dutch victims of the Japanese terror during World War 2.

Prime Minister,
\
The 1951 San Francisco Peace Treaty and the Yoshida-Stikker protocol of 1956 gave Japan the opportunity to restore its economy. As a result Japan could give war reparation loans to support many of the nations it occupied during World War 2; but left out the Dutch from Dutch-East Indies on the grounds that the 1956 Yoshida-Stikker protocol had resolved Japan's moral obligation voluntarily.

The Foundation of Japanese Honorary Debts disagree with this view point as the "compensation" was only for the Dutch citizens who were locked up in concentration camps, forgetting the Dutch terrorized outside the camps.But also because the very small voluntary payment in no way covers the permanent mental and physical damage sufferings inflicted on the victims by the Japanese Imperial Army. In addition the judgements by the Japanese lower courts, that Japan violated Laws and Customs of War on Land (the Hague Convention of 1907) and the Geneva Convention on Prisoners of War of 1929, made clear that Japan is obligated to the Dutch victims. The Supreme Court of Japan did not come to a conclusion as it dismissed the cassation on administrative grounds. The verdicts by Japan's lower courts were not dismissed, shaming Japan forever.

In our dialogue with Japan's representatives in The Hague we will continue to seek a mutually acceptable resolution for the Dutch victims of the Japanese terror during World War Two. The 70th Anniversary of the ending of World War Two is the opportune moment to make such a resolve and would give the 25th Anniversary of the Foundation of Japanese Honorary Debts a "silver lining".

CLOUDS  are covering the flag of the Rising Sun of Japan. I wonder how long these clouds will cover this red spot in Japan's flag. The white flag with the red dot in the middle, which they (Japan) calls "The Rising Sun".

This is the name my mother and the thousands of women who were prisoners of the Japanese Imperial Army during World War Two gave ' the flag with the red blood spot in the middle'."That is the flag of Japan'' : my mother would say. How she and all the women hated that flag. Japan has forgotten how cruel their Japanese army was. How they raped innocent girls and young mothers, who were locked up by these barbaric men. These women were totally helpless and were abused every day by these monsters. How can one ever forget what these monsters did to my mother and her sister.How can one ever forget seeing your mother being beaten over and over again in front of your eyes. As little as we were, we knew how our mothers suffered, we could feel it. I will never be able to say that I forgive these monsters what they had done to my mother.I will forever ask the question "WHY?"

History continued to be a large part of my life. Whenever WW2 is mentioned or there are memorial services held I have to think about my mother, her sister and their husbands. I think about the Asian Holocaust, then I discover that there are large parts missing from the stories of WW2  It touches deep emotions inside of me, almost to the point that I become angry. How is it possible that Japan has never dealt with this legacy? Why is it that Japan of today keeps denying the unbelievable violence inflicted by their Imperial Japanese military during WW2. Many people were brutally murdered. This was the holocaust of Asia. Many millions of people suffered at the hands of this barbaric Imperial Japanese army. Many perished. Most of the casualties Civilians, innocent women, children and men.Many women and young girls brutally raped and tortured and then killed. Young girls forced into sexual slavery, recruited at Imperial Japan's behest  with the knowledge of the Japanese government authorities.


The following poem has been written by a Service Man while a prisoner of the Japanese during World War Two.
The Writer is unknow,

There are windows by the fireside
Who know not of their loss
There are orphans in the classroom
Who must soon take up the cross
That was thrown in useless gesture
By these hopeful waiting lads
But the loss would have been greater
Had they taken nine more lads.

To men of "Faith" the sun still shines
And soon there will be a day
When the sky will show the sunshine
And dark clouds "Go Away".

Note: The Japanese policy was, if one man escaped, 9 others would die.

Sadly for those who lived, carry the scars forever. Those who survived starvation, diseases, torture and pain are more hopeless enslaved than those who falsely believe they are free.God bless all of you who survived the horrific hell of the POW camps.

Just a reminder to Japan, how it really was. You can't white wash your past. Its time to take the blame and remove the shame.

We who will remain,

We are indeed the lucky and unlucky ones,
As we are the ones who have lived to tell the tales of those we once knew.

On the left it is me Thea, in the middle Mrs. van Kampen who now is 88 years young and on the right my cousin Toby van Driel.
Posted by Thea at 12:34 PM No comments: