The Monuments for the Merchant Marine

I could not finish the story of following my stepfather's footsteps, without finishing it with the Memorial statues.After more than 50 years after World War II ended,these memorial monuments are dedicated to all the Sea services Navy, Marine Corps,Coast Guard, and Merchant Marine.
Dad,I wish you could have seen these Memorial Monuments.Specifically the one they build at the foot of The Golden Bridge, San Francisco. The Harbor you sailed from so many times during World War II. 1941-1945. 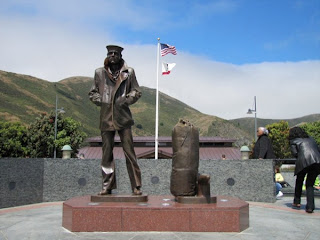 The Lone Sailor in Marine County Ca.on the north of the Golden Gate Bridge, dedicated to all the Sea services Navy,Marine Corps, Coast Guard, and Merchant Marine.
The plaque at this sculpture is unique to this location and reads:

THIS IS A MEMORIAL TO EVERYONE WHO EVER SAILED
OUT OF THE GOLDEN GATE IN THE SERVICE OF THEIR
COUNTRY- IN THE NAVY, THE MARINE CORPS, THE
COAST GUARD, THE MERCHANT MARINE.

A SHIP HEADING FOR SEA PASSES DIRECTLY BY THIS
SPOT AT THE NORTHERN END OF THE GOLDEN GATE.
HERE THE SAILOR FEELS THE FIRST LONG ROLL OF THE
SEA,THE BEGINNING OF THE ENDLESS HORIZON THAT
LEADS TO THE FAR PACIFIC.

THOUSANDS AND THOUSANDS OF AMERICAN SEAFARERS
HAVE SAILED PAST THIS PLACE, IN PEACE AND WAR, TO
DEFEND THIS COUNTRY AND ITS SEA FRONTIERS. MANY
OF THEM NEVER RETURNED. THIS MONUMENT IS
DEDICATED TO THE ORDINARY SAILORS AND MARINES
WHO SAILED FROM THIS PLACE AND DID THEIR DUTY.

My step father sailed on the Boschfontein, which was a Dutch ship, which was sailing for the Allies.The ship was stationed in San Francisco and was transferred into a troop ship in World War II. 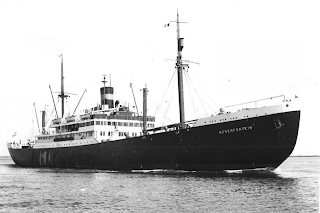 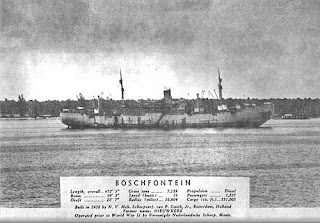 Dad I came upon this poem, and it says it all! I am so proud of you.

We seldom get their names,
In spite of all they do.
They're merely mentioned in the press
"As members of the crew"
Yet they're the men whose courage,
Arms and clothes, equips and feeds,
The boys in every battle zone
Who do the glorious deeds.
We speak of them as Merchant Men,
Yet when they once set out,
No matter where their course may run,
Death follows them about

They're stalked by death from port to port,
When once the anchor is weighed,
From master down to cabin boy,
They're Sailors unafraid,
They know the lurking submarines,
They've seen them break the wave.

And still with little means to fight,
The cruel odds they brave,
Sometimes they are struck in the dead of night,
And into rafts they fall-
And drift about and pray to God,
To save them all.

We think of them as Merchant Men,
But when the war is won,
They too must share the pride,
For duty noble done,
And when the world is free once more,
And home the boys from sea,
When from the foxholes come,
The lads with us once more to be
When from the skies the boys slip down
Let all remember then,
The courage of the Yankee youth,(for every Nationality)
Who sailed as MERCHANT MEN.

This poem written by Edgar A. Guest, a well respected American Poet, wrote this poem during WWII.Obviously,along with World Leaders of the time, he respected and honored the men of the Merchant Marine. This poem tells it all!

This Monument is In New York. A power full memorial for the merchant Marine in Battery Park.
The sculpture by Marisol. 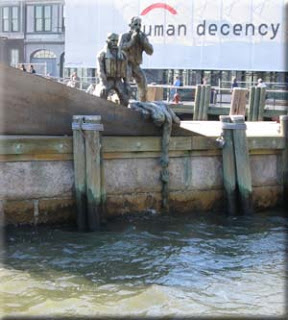 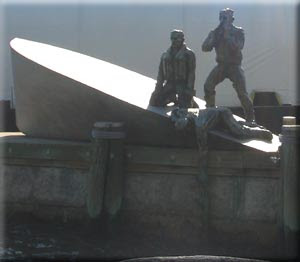 The water splashed up against the side, and every time it receded the head and shoulders of the man in the water came into view. A very power full memorial statue. 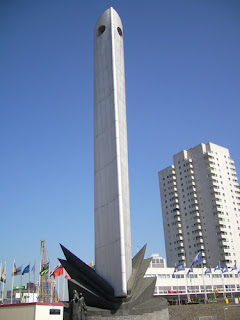 This memorial statue is in Rotterdam. The Bow-National Merchant Marine Monument at Leuvehoofd-Boompjeskade at the Harbor of Rotterdam, Holland. It stands on the corner of the Erasmusbridge. 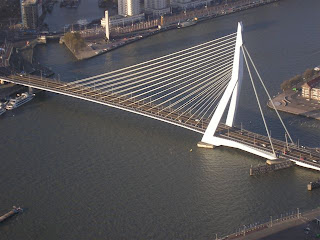 You can see the Statue on the corner of the Harbor.

Time has passed but we've finally been told
About the men on the ships who carried more
than their load.
The first men to die even before the war was declared,
Loving fathers and sons, hardly any were spared.
More seamen perished, more than any other
branch it is said.
One seamen out of thirty-two gave his life and
are dead.
The scars still remain, but the story is told.
And the monuments speak for themselves, the honor
bestowed.
It's respect to their comrades who gave their life
to the ocean.
Now their relatives can remember them with devotion. 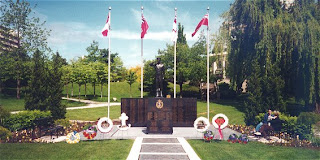 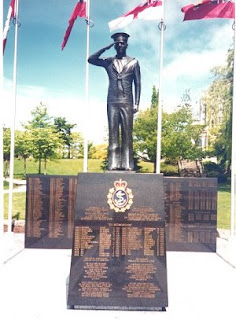 Located on the Lake Ontario Waterfront, in a beautiful setting in Spencer Park, Burlington Ontario Canada, The Memorial Monument was unveiled on May 14 1995.The memorial is dedicated to the memory of 31 warships and the 2024 Naval Personnel of the Royal Canadian Navy and the 75 ships and 1466 merchant seamen, who were lost during World War II at sea.
Lest not Forget.
Posted by Thea at 5:15 PM