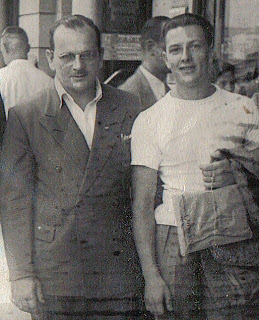 My Step father, on the left, with Mr. Kerklaan,
Mr. Kerklaan sailed on the ms. Boschfontein and they were very good friends. 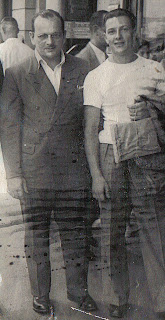 My Step father (the man) I met on board the Boschfontein in April 1946.How lucky I have been. I had lost my father, who I never knew, he died on the Burma Death Railway on the River Kwai on September 18, 1943. I was only two years old.

This story has to be told, I am telling them to honor my step father and my tears are flowing.Never in a million years I could have figured out what he had been through, if the internet had not existed.So much information is available and I thank everybody that I finally am able to find out about my step fathers where about during World War II. He was a man with very few words. He lived his life day by day, and enjoyed every minute of it. He loved his children and his grandchildren.But first of all he was a sailor and his love for the sea was unparalleled.
The War had brought my mom,my step-dad and me together, but the cost and heartache had been high.But their life has been rewarded and they had two children together.In September 1947 I got a brother and two years later I got a sister.I am their big sister, how lucky I am.
Thank you Dad for being such a good father for me, I love you. You and Mom are always in my thoughts.

As you read on my other blogs my step father sailed on the ms. Boschfontein. During the War the ship was transferred into a troop transport ship.From 1941-1945 the ship was sailing the dangerous waters of the Pacific.

On March 20 1945 the Boschfontein had docked in Saipan, it is not clear when the ship left Saipan but it left Saipan in convoy and arrived in Iwo Jima some where at the beginning of April, 1945. 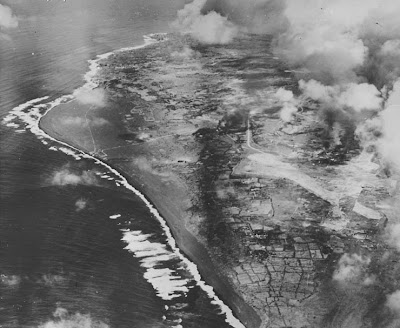 An aerial photo of Iwo Jima taken during a raid in early 1945.

Iwo Jima is a small speck in the Pacific. Iwo Jima acted as an early warning station for Japan, giving Tokyo 2 hours of warning before the American bombers reached their targets.
On March 26, 1945 the Japanese mounted the final suicide charge at Iwo Jima and on April 5,1945 the Americans established an advanced air base in Iwo Jima, Japan.The ms. Boschfontein had left Saipan in convoy and docked in  Iwo Jima  somewhere in early April 1945. 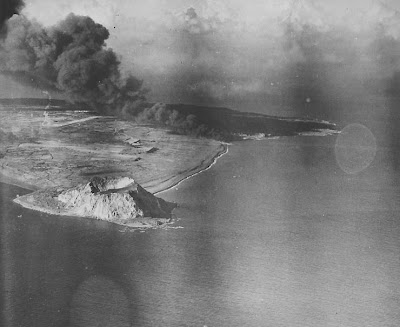 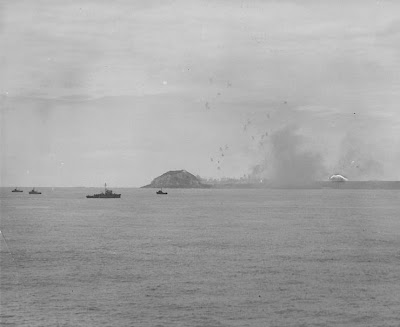 Mine sweepers worked the waters off  Iwo Jima . 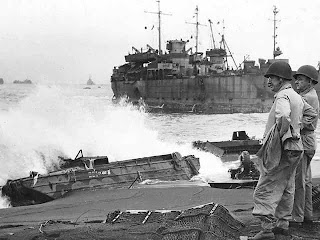 Iwo Jima is a barren Volcanic island midway between Saipan and Japan. It was considered a desirable emergency base for B-29's flying to and from Japan. 70.000 American soldiers invaded this tiny volcanic island in the Pacific.

The flag raised on Iwo Jima. 1945
Hard to believe my step fathers footsteps are left on this tiny island in the middle of the Pacicfic ocean.
28.000 American soldiers lost their lives, because of this little speck of an island; Iwo Jima.
They fought a battle for World Peace. Lest we forget.

On April 14,1945 the ms.Boschfontein left Iwo Jima on its way to Guam. The Japanese had occupied Guam and many Chamorres were put in Japanese concentration camps and many died of starvation.
What a terrible things my step father must have seen. Children who were so undernourished, that they looked like skeletons.On April 17,1945, the ship arrived in Guam, for a two day stay. On April 19.1945  the ship left Guam again. 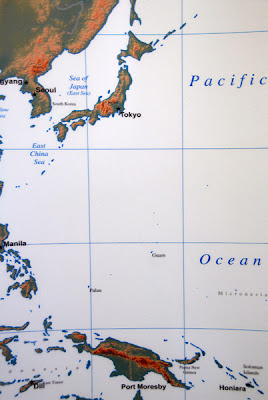 ,
Guam a little island in the middle of the ocean. 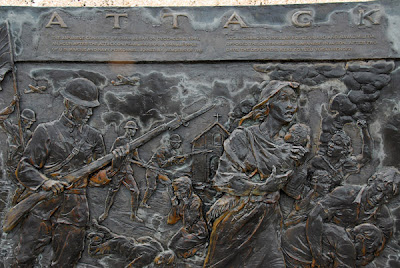 The Japanese invasion on December 8,1941. One day after Pearl Harbor was bombed. 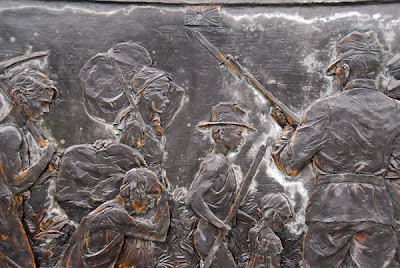 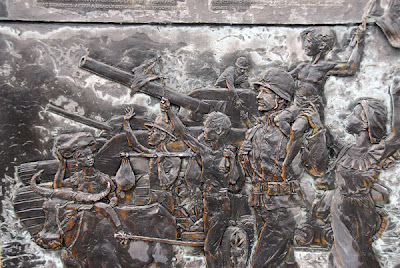 The Liberation of Guam. Children on the shoulders of American soldiers. 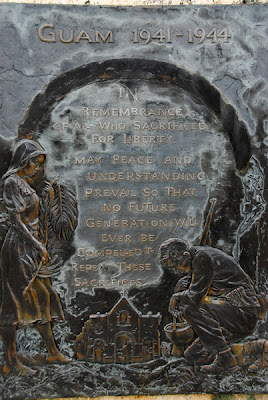 Remembrance
of all who sacrificed for
Liberty
may Peace and
understanding
prevail so that
no future
Generation will ever be
compelled to repeat
These Sacrifices. 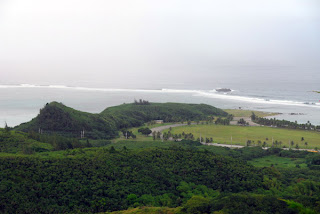 Guam Asan Bay  where these remembrance bronze memorial overlook the Bay to sea.

On April 19,1945 the Boschfontein left the Bay of Asan in Guam on their next voyage to Noumea, where they arrived on May 1, 1945.They were wondering when this horrible War was going to be over. They longed for Peace and Home. They had not seen family and friends for so long. My step-father had no idea that it would take a few more months before the War would be over. But he did not go home till 1946, and the Boschfontein left again; this time to Indonesia to pick up repatriates.

More about this on another blog. 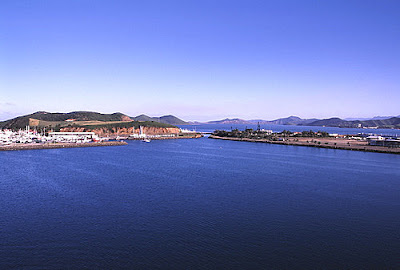 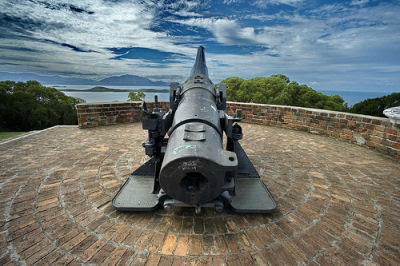 Overlooking the Harbor of Noumea.
During the war Noumea was a US military headquarters in the South Pacific. The first troops arrived there in March 1942, some on the Boschfontein. It was here that the Marines and Soldiers would capture dozens of islands embarked, and the ships and planes that supported them in battle refueled and refitted.It remained a large support throughout the Pacific campaign. As you sail out of the Harbor of Noumea you follow the footsteps of the brave men and women who won a great victory in the Pacific, many of whom never to return to the land they loved.
The Boschfontein left Noumea on May 7, 1945 and docked at Eniwok  harbor on May 12,1945, the ship left and went to Hollandia, and docked on May 14,1945 in Leyte,on May  21,1945. 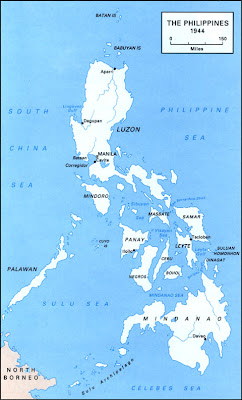 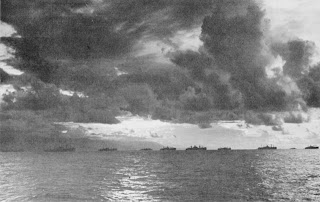 A large convoy of ships is laying off the coast of Leyte. 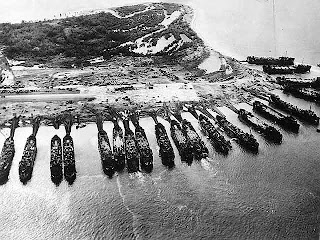 Leyte May 21, 1945 .
Numerous ships are anchored in the Harbor. The Boschfontein left May 21,1945 on another mission and arrived in Tacloban,on May 29,1945.
My step fathers birthday had come and gone. He was 38 years old on May 15, but forgot about it. No time to celebrate, no time to think about it.
From Tacloban the voyage brought the Boschfontein in Manila, the Philippines.

My step father always got tears in his eyes, when the name  Manila was mentioned.When the Boschfontein docked  in Manila on May 31, 1945 they could not believe what they saw.