The remnants of War on Biak Island Papua.

In 1944 my step father sailing on the Boschfontein spend quite a few times in Hollandia, and Biak.
Biak Island Papua. Biak is the largest of the Schouten islands. Situated to the North of Geelvink Bay. The name Schouten comes from a Dutch Navigator, who discovered this island in 1615-16, off the Northern coast of West Papua(Indonesia)During World War II in April 1942, Biak was invaded by the Japanese, but was retaken by Allied Forces during May 1944. War relics and even human remains may still be found in the forest.
Biak town is on the Southern coast of Biak. 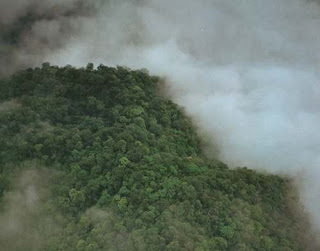 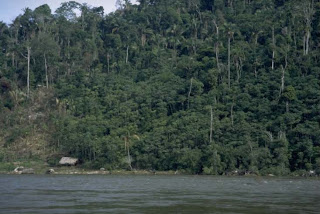 From September 16,1944 to July 1, 1945, the Boschfontein sailed in and out these harbors to drop off supplies and troops.The Dutch side of New Guinea never was in the hands of the Japanese.In the South in Merauke the three colored flag was always blowing in the wind. In the North the Dutch regiment receded into the jungle and from the jungle they carried out a guerrilla war against the Japanese.On April 22 1944 the Americans landed in this desolated country, and the Dutch determine fighters got back their freedom of movement.
What the Americans achieved in this savaged scenery with it's dense jungle is unbelievable.
On the island of Biak lived only one Dutch missionary, as the only white man, between the Papua tribes. 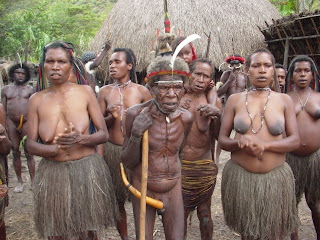 But the Yankees build in record tempo, war bases of an unbelievable size. Not only in Hollandia but as well on Biak.
In 1943 a Japanese spokesman had complaint that he had been bewildered about the skills of the Americans in the jungle-war.A surprise to the Japanese which had been very naive about thinking that they would be far superior in a jungle war..."They work with big machines, which can take trees out the ground and burn the terrain and flatten it in no time.They advance so fast; in just a few days, where once a jungle was, a landing strip for planes appears.And at the same tempo they make roads".
Bulldozers made big open spaces in the middle of the jungle. In quick tempo wooden barracks, bungalows,work places, hangars,telephone centrals appeared,in a record time they build a city to house ten thousand men and for all their military equipment.
Within a few days after the ground was leveled and the ground hardened the bombers and the fighter planes were able to land.It was amazing, where up to this time hardly a native had put his foot steps, a modern war organization was erected in the middle of this dense jungle.
Even a few small churches for the spiritual care and comfort of the soldiers were build. They even build cinemas for the soldiers entertainment.A network of roads were build. Thousands of jeeps and heavy trucks brought in the supplies and troops which were brought in by ships, to this place in the middle of the jungle. A war city in New-Guinea.In the middle of the dense jungle.In a place where first monkeys and paradise birds lived was now an Industrial city of America.An impressive reflection of American energy and drive!
On the bottom of the picture a deep stalactite cave. This cave was after the landing from the Americans on Biak a hiding place for a group of Japanese. The exits were so dense with vegetation, that they were hardly noticed. The Americans first got to know that the enemy the Japanese were still there,when their airplanes took off from the airstrip and were shot down.A heavy fight broke out,with lots of casualties.Finally the Japanese in this cave were killed. The American soldiers had rolled burning gasoline drums into these caves and threw explosives down.The cave still holds burned out gas drums, etc and skeletons. 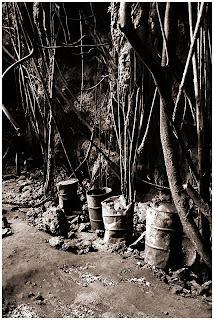 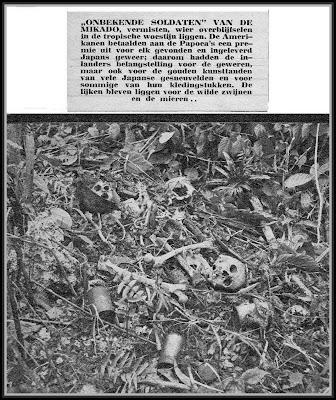 Above picture are unknown Japanese soldiers from Mikado. The Americans payed the Papuaans for every riffle.They were very eager for these riffles but more so for the golden teeth from many dead Japanese soldiers and their clothes. The bodies left behind were a heaven for wild swines and big ants....Skulls and fragments of bones are still found in Biak. 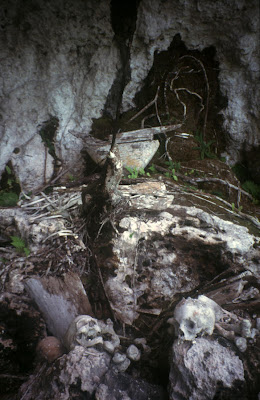 In January 1948 this article was written in a Dutch magazine,the Katholieke Illustratie. It says: On New Guinea for hundreds of millions destroyed. 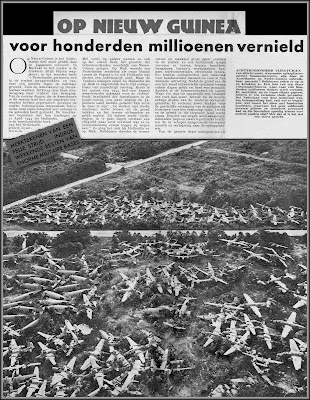 About eighteen hundred airplanes of all sorts, like brand new bombers were destroyed by the Americans on New Guinea.Bulldozers drove into them and made them look like old scrap.These planes found their last resting place in the jungle and the jungle soon will leave no traces.A non glory end for these planes.The Netherlands had no interest for this air fleet.The Americans had offered them to the Dutch for little money, but what use were these planes for the Netherlands. The Netherlands had not enough pilots and not enough technical personnel for these planes.The war had ended, and these planes soon would be old fashion.With all that said, it's very sad to see, a grave yard, skeletons of planes. 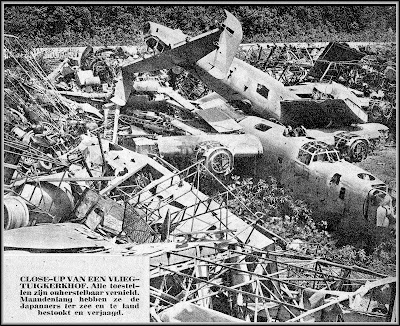 A close-up of an airplane grave yard. All these machines are beyond repair.For months they chased the Japanese fighters on land and at sea. 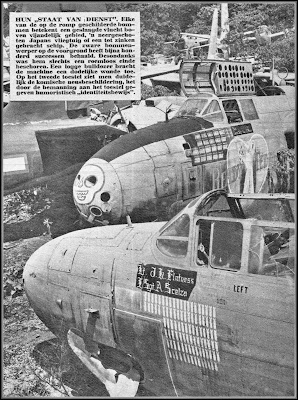 Their rank of service.
On each of these bombers a painting means a successful flight above enemy territory, an enemy airplane shot down or a Japanese ship bombed. The big bomber on the fore ground had almost one hundred successful flights. But sadly for these planes there was no glory at the end. A bulldozer brought them deadly wounds. On the second plane you see a comical painting on the nose of the machine, a painting put their by it's crew as a " humorist identity ".

A wreck of a Japanese tank on the edge of the jungle. The tank is already almost overgrown and taken over by the jungle.Between the caterpillar wheels a papaya tree is already growing.

It's hard to imagine to get a picture of it in your mind, unless you see it with your own eyes.It makes a very lasting impression on you, when you see all this material left behind.(This is what the Dutch correspondent wrote in his article, when he was there in 1947) Such a waste.In world war II the Americans occupied New Guinea in 1944 and in a very short time they build these bases for their military.Not only on Biak and Hollandia but also at Halmaheira near the Moluken islands they changed impassible dense jungle into these large military bases.
On Biak island they build 50 cinemas for the entertainment of their military and ground personnel. 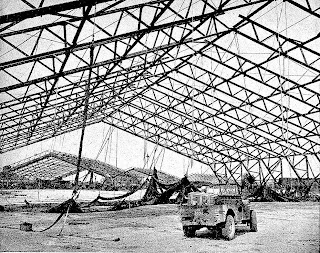 Huge hangars, one next to the other were build in high tempo for the hundreds of the heaviest bombers and the fastest fighter planes.An unbelievable bustling ambition took place here in the middle of the jungle. Now everything is silent and abandoned.It's a very ghostly feeling.Soon every thing will be overgrown and the jungle will take over once more.

Along the now overgrown roads you can still find now and again a road sign.
"Drive slow-be careful" and more of these road signs, during war time these roads had been very busy day and night.With coming and going trucks and thousands of jeeps and military trucks. This sign tells you that in the last eight days no traffic accidents had happened. Other signs had written on them ; 'Here my brother died' or it said, Be careful- Hell is not full jet'. Now all traffic has stopped, but the signs are still there.

To day Biak island is part of Indonesia.

We demand freedom to determine our own future. We demand to speak our mind. We demand an end to the genocide, the rape, the torture, the harassment, the racism and intimidation that we are forced to endure everyday. We will never consider ourselves to be Indonesian.
This was written on November 14, 2011. 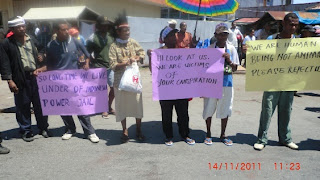 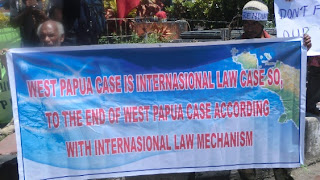 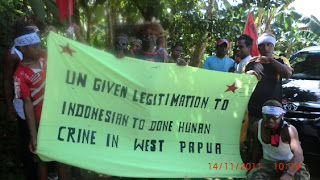 We hold these truths to be self-evident:
that all men are created equal,
that they are endowed by their Creator
with certain unalienable rights
that among these are Life, Liberty
and the pursuit of Happiness.

Thomas Jefferson "The declaration of Independence"
Posted by Thea at 1:49 PM