In the summer of 1948, after living in Kolhorn for two years, I was told we had to move.For me it was devastating , I loved it here in Kolhorn. I had to leave my friends. I felt very sad.I had just turned seven years old, and in my short life I had moved so many times.Why could we not stay here? My mother was pregnant again and the house we were sharing with my Oma and Opa was too small. There was only a living room with two cupboards, which when you opened the doors were beds. They are called bedste (cupboard-bed).I slept in the attic with my aunt Anneke, who was not married yet at the time. The attic could be very cold in wintertime. We had no shower and the toilet was an outhouse,a small wooden structure with a shelf  with a hole in it. Underneath stood a big pail, which was picked up once a week by the poop man we called them. Just like the garbage get picked up weekly. Not a very nice job.There were not enough houses  after the war, so we had to move to Zandvoort to live with the mother of my step father. She was widowed and had a little more room.In August 1948 we moved to Zandvoort to the Hobbemanstraat. I did not like it there at all.It was all so strange for me.This Oma did not like me.I was not her real grandchild and I could feel it. It was hard for my mother too, we were not accepted by the mother of my stepfather. We were outsiders, how dare her son was with a women who was not from his own town.We were strangers for her, coming from Indonesia, for her we were not Dutch.On top of that the parents from my mother were from Friesland, which in those days had there own language.Friesland is a province of The Netherlands.My step father was  a married man to another women from Zandvoort.Because of  World War 2 he had not been home for six years and his wife had fallen in love with some body else and he had met my mother on the ship when we came back from Indonesia.He was on a merchant ship stationed in San Francisco when the war broke out. The Boschfontein , was being changed over to a warship. After that he sailed on this ship until the ship retired .In world war 2 he sailed back and forward to the Pacific taking American soldiers , Pilots and ammunition as close as possible to the war zone. At one time the Boschfontein had the Flying Tigers on board, a well known bunch of pilots from America.The best. He often talked about that.After the war my father received these war medals. He never spoke about these medals he had received, and we did not even know for a long time that he had them. His life had been many times in danger in World War 2, we his children had to read this in a newspaper, when he was interviewed on his ninety birthday.

In 1941 when Pearl Harbor was bombed by the Japanese the Boschfontein had just left the harbor. They had been lucky. Read the book Black Sheep: The life of Pappy Boyington. he is one of the flying tigers pilots,or read Flying Tigers the diaries from Charles Bond and Terry Anderson.
The pilots on board the Boschfontein were disguised as passengers, they were listed as everything but pilots. This was a secret mission. They were manifests as acrobats, artists, musicians, salesmen, teachers, and undertakers. There were other passengers on the Boschfontein and the pilots mixed with them and wore civilian clothes.They left San Francisco pier and soon were beneath the Golden Gate Bridge, heading for Honolulu. Their destination Surabaja.Java, the Dutch Indies (now called Indonesia) where they arrived on October 18 1941. 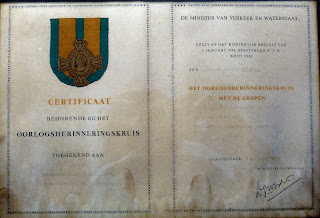 The water marks on this certificate are sea water marks. One time the ship collided with another ship and hit exactly where my father's cabin was.There was a huge hole and they thought the ship would sink. 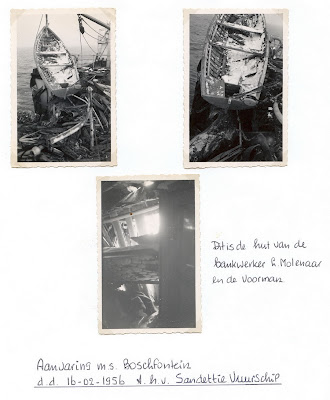 My step fathers name Leendert Jacobus Molenaar. He shared the cabin with the foreman. 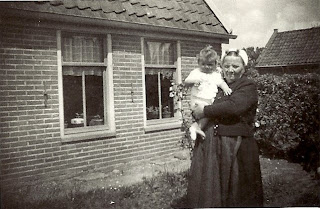 The mother of my step father with my half brother Leendert, in front of her house in Zandvoort.

My step father with his mother and father. His father was from Zandvoort , he was from a large family by the name of Molenaar's(nickname the Bokkum).His mother was from Scheveningen, another fishing town close to Zandvoort.
How strange it was for me. We were sleeping upstairs in this small house, the floors were from white washed wooden boards . My Oma's bed room was downstairs. Upstairs in the floor was a hole, exactly above her bedroom. When I looked through the hole I could see her laying in bed.At night she had no cap on and I could see that she took only one of her skirts off. She wore a couple of skirts over one each other. Why so many clothes? It was so strange for me.It was in the middle of summer and it was hot. I was used to wear very little from the days in Indonesia. Although in the winter I had to wear more clothes and they itched.In Kolhorn I had been wearing wooden shoes, now I had to wear leather shoes, because in Zandvoort it would look funny to wear wooden shoes. They only wear these in the country . Farmers would wear these, they would tell me. They looked down on me, as if I came from another planet.My 'new' Oma always went to the beach when the fishing boats came in with their catch. I remember that she would come home with tiny shrimps. A huge pot would be put on the stove and when the water was boiling hot the shrimps would be boiled. At night she would have this huge pile laying on the table in the living room and she would peel them. Peeling  these tiny shrimps was an art  itself. I wanted to try it, but was not allowed. It was like there was a pot of gold laying on the table.She would be peeling these tiny shrimps the whole night and weigh them.They were then nicely wrapped up in small packages of special paper and put in this big wicker basket. The next day she would step on the tram sometimes she walked through the dunes to Bentveld where rich people lived. She had her regular clients in this town, because these tiny shrimps were a delicacy, and very expensive.The Family Molenaar was in the fishing trade, and still are.As of today the Molenaars are still selling fish etc.

In the center of town in Zandvoort , there are two statues from  my step father's grandparents. 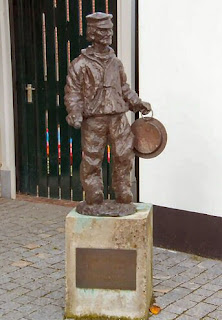 My stepfathers grandpa, the village crier. 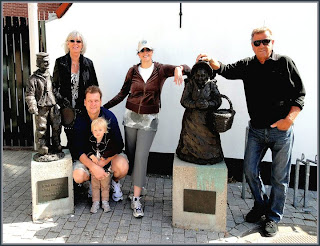 Here we are with our son and wife and grand daughter Madelaine, posing with the statue's. May 2011. 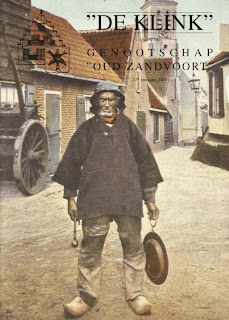 The village crier, Molenaar (the Bokkum) his nickname. 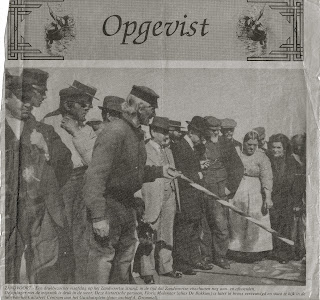 The Opa from my step-father was a fish auctioneer. 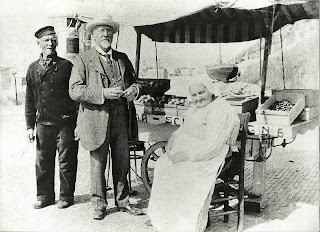 Oma and Opa from my step father in early 1800 with their fish car selling fish on the beach in Zandvoort.

Oma Molenaar the mother of my step-father came from a family of all fisher-men. She lived in Scheveningen, before she moved to Zandvoort and married a Molenaar. Her name was Kuyt and a well known family in Scheveningen. 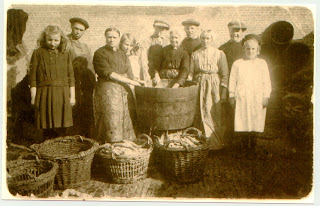 My step-fathers mother Jacoba Kuyt. First one on the left. 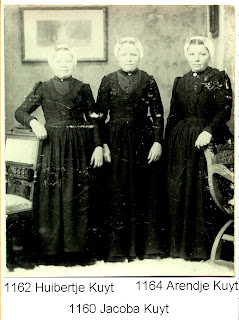 Jacoba Kuyt the mother of my step-father married Leendert Molenaar.

After only a very short time living with the mother of my step father we moved to a house in the Westerparkstraat, where we rented the upper floor. It was right near the sea.My husband and I took a picture of it when we were in the Netherlands last year May 2011, and could see the house from the window of the apartment we rented. The Dunes in the background and the sea at the front door. See the arrow. One day my step-father had come home from a long sea trip and he arrived with a big truck full of goods. Like sacks of flour etc.In 1948 not everything was available  only with ration-coupons.It was always a feast when he arrived home. One day some body knocked on the door and told my mother that there was all this white powder flying out the kitchen window.My brother, had thrown lots of flour out the window. On the street below it looked like it had snowed.All his young life my brother thought about all kinds of things he could get in trouble with.He was like his father. My mother always said so father so son. He was full of mischief and he inherited this from his dad.
My step fathers mother told us that he always got into trouble, and that he always got locked up in his room. One day the neighbors across the street spoke to his mother and told them that they always saw there son climbing out the window. He knotted his sheets together and tied it to the bedpost and climbed out, and went back in the same way. His parents did not know this for the longest time, until the neighbors had seen it.When his father heard about that he always sneaked out his room through the window, he said;'I will fix that, and he nailed the window from his room shut.' One day he was locked up again and was so board he build a ship from his bed with a sail from his sheets.His mother was so mad. He had ruined the sheets. No wonder he became a sailor.He run away from home and signed on as a young boy on a ship, and that's what he did for the rest of his life. 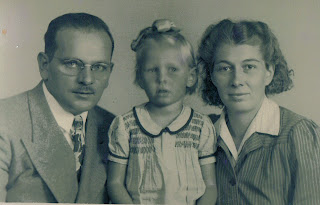 My step father Leendert Jacobus Molenaar, myself in the middle and my mom. This picture was taken at the end of 1946.
In 1949 we moved to another house, where my half sister was born. More about this in my next blog.