"Peace Monument" for former'comfort women' (sex slaves for the Japanese)

A huge victory was established for comfort women, as the Japanese government continues to lobby for its removal.
The doors and windows of the Japanese Embassy in Seoul are firmly shut, with only the surveillance TV cameras greeting the elderly women who demand that Japan apologize and pledge to come back next week.

Japan you cannot continue to turn your back, as a 130-cm bronze sculpture of a young girl was erected Wednesday on the road in front of the Japanese embassy in Seoul's Jongno District.

The"Peace Monument" was designed to give shape to the spirit of the "comfort women" who have come to the area every Wednesday for the past twenty years to call for an apology from the Japanese government. 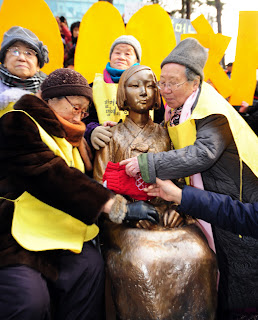 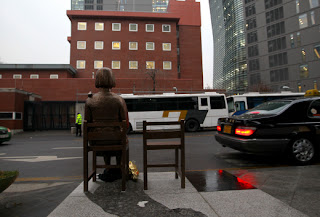 Dressed in a hanbok,traditional Korean outfit, the girl sits on a chair with her fists on her knees, looking quietly toward the Japanese embassy.

I read in the Toronto Star an article about GTA (Toronto) students  who join "comfort women's" quest for justice.They went to Ottawa and participated in the demonstration in front of the Japanese Embassy.

The students had never heard of 'comfort women,' the cruel label Japanese soldiers used for the 200,000 young Asian girls they turned into sex slaves during World War II.
But a history lesson last week has sparked an outrage that the 16-year-old will take to Ottawa.On Wednesday the students had an unusual school trip to witness the largest peacetime protest held outside the Japanese embassy.

They were kidnapped right off the street and raped up to 30 times a day and in most cases it ruined their lives
.
130 students, 200 Toronto teachers, school trustees and social justice advocates-plus 100 more from Ottawas- presented a written request to the embassy.
Numerous countries have also made the same request, but to-date the Japanese government has not admitted to having ever set up the grisly 'comfort station' shacks for Japanese soldiers to use near the front lines.
I wonder is Japan ever going to admit to their war crimes?
"If a girl or a woman refused to do what they wanted, she would be tortured or put to death." said the organizer Dr. Joseph Wong of Toronto, an expert on what is believed the most sweeping case institutionalized sexual slavery in history. His organization AL-PHA (Toronto Association for learning and Preserving the History of World War 2 in Asia) seeks to spread awareness of atrocities often overshadowed by the Holocaust in Europe.
ALPHA helped design lesson plans for Ontario students about this horrific practice-something that is not taught in Japan, Dr. Wong noted.
This is unlike Germany, which requires all students to learn about the Holocaust.
It is important for young people of today to know about World War !! in Asia." Are these lessons too gritty for young teenagers?" the history teacher, from Falan's school said."It is gruesome; what happened to those young girls, was just sick, and many died lonely and shunned by their villages," said a grade 10 student ." But it is totally appropriate for us to learn about this because it did happen."


Mom this statue is also for you and your sister and all the women who were abused by the Japanese soldiers in World War 2. My mother and her sister were raped by these soldiers of Japan, in Moentilan on Java,in the Dutch Indies, while in this concentration camp, they passed away a couple of years ago.They never talked about it. They felt shame and humiliated. I wished they could have seen that statue.. A war is horrible, a war turns mankind  into beasts..and worse.Two years ago when I visited my aunt,the youngest sister of my mother I told her that I was working on a book, about our years in Japanese concentration camp on the island of Java, in the Dutch East Indies (now called Indonesia)She asked if the book was finished and I told her, almost. Then she said to me that she had to tell me something which I should know.She became very emotional and was barely able to tell me what my mother had told her.
She had to promise my mother never to tell any one, she had been so worried that their mother would hear about it.Their mother at the time was very sick and died soon after.She never knew what had happened to their two daughters in that far away land in the Dutch East Indies in those Japanese concentration camps.I was shocked, never in a million years I had thought my mother and her sister were victims of rape, that this had happened to them.My mother had told me once that there was a church on the grounds of the concentration camp in Moentilan and that very bad things happened in this church.The Japanese had set up office in this church.She often was talking about her believes and that she had lost her believe in God, because of what happened in that church.How could He allow this, she often said. I did not know that she was talking about.....rape....Sometimes she told me a little about these concentration camps, when I asked her about it.At the time we were Japanese prisoners I was only 4 years old.One day I was searching the internet about this Moentilan women prison camp and I saw a picture of a building; to my surprise this was the building I always tried to describe to my mom. I could remember that my mom one day was in front of that church and I saw her throwing up. And I asked her if she fell, because she was bleeding..She always denied it, when I spoke about it.My mother and I , my mothers sister and her two children were in Japanese Prison camp for 31/2 years.
My Aunt is the youngest of  nine children and is the only one still alive. She lives with her husband in Kolhorn, a small village in The Netherlands.My book was published in November 2010. "I Thought You Should Know", it is about our time in Japanese prison Camp on the island of Java.


"Listen Japanese ambassador, listen to Korea. Tell the Japanese government that the world is on the road to real peace. Make an apology before we die!" said Kim Bok-dong, one of the surviving victims attending the historic rally.After a deep sigh, and trying to hide her emotions, she added,"We Koreans can do anything if we stick together. I"d be grateful if our government could sternly tell the Japanese government to apologize and provide compensation."
Another survivor, Gil Won-ok, said,"The Japanese people are not apologizing. I have a feeling that our 1,000th  weekly rally will end only in vain. How discouraging! I hope we Koreans do our best in our respective positions to prevent future suffering of this kind."