These are a few comments on the Japan issues 'heartfelt apology' to former Canadian prisoners of war;

HYPOCRISY
This so-called  "apology" is just some kind of PR show by the Japanese government to further confuse ordinary people who know too little about this chapter of history. The Japanese government and the right-wingers will again say that we have this and that officials apologized, how many more apologies do you want. If this is genuine repentance of Japan's war crimes, why such apology cannot be passed in the Japanese Parliament? Why such apology does not come with any reparations? As one Japanese MP said many years ago regarding Japan's war crime responsibility,"Apology without compensation is a hypocrisy; compensation without apology is an insult to the victims." In these 2 years, the Japanese government has been using this kind of PR show for Allied POW, including inviting some POWs from the US, Australia etc to visit Japan and offered this kind of insincere apology with no support from the Japanese Parliament. All of these "apologies" were without any reparation. Where is the sincerity? Even worse, these kind of "apologies" were only offered to "White" POWs. What about the people in most suffered countries, such as China and Korea? How can we accept this kind of double-standard? If Japan is sincere in their apology, why the museum at Yasukuni Shrine still portraits the war of aggression as a holy war that it's for the greater prosperity of East Asia? If Canadian government is really accepting this apology, then our government should follow-up to ask for reparations for these Canadian HK Vet, at least to recover the payment offered to these victims in 1998 by our Canadian government using our tax-payer's money. Why should we Canadians pay for Japan's war crimes? Our government should also urge Japan to pass an apology and compensation resolution in the Japanese Parliament to redress all victims of Japanese war crimes so as to resolve this issue once and for all. We Canadians are not just concerned about our own Canadian justice, we also are concerned about the justice for victims of other countries.

JAPAN'S SHAMEFUL INABILITY
.....to apologize. Yet receives apologies from governments like Canada, including financial compensation, Japan has not apologized to the Koreans for what they did from 1910-1945. The Japanese soldiers made the Korean women into sex slaves and tortured them mercilessly. These barbaric acts are recent and many of these "comfort women" exist still today. What is wrong with the Japanese that they think honour is inherent, yet their behavior is selfish and apathetic? I can spit on you but don't dare spit on me? The Japanese elders teach their youth this racism and xenophobia, so don't be fooled by their kind appearance.

CROCODILE TEARS
Twenty years ago I'd have felt that this apology actually meant something. Now it's just a politically correct gesture so the history can be swept under the rug and forgotten. Most of our men who were enslaved and tortured are dead and will never hear this too late apology. Unlike the Germans, the Japanese have never faced up to their crimes against humanity. What they did in China and what they did to innocent women and children in The Dutch Indies, was as evil and horrible as it could possibly be. They've yet to apologize for it. As for what the Allies or the US did to Japan; the Japanese wanted war and they got it.

There were 33 comments, too many to write them all on my blog. I must say most of the comments were the same as above. The Canadians are not buying apologies from the Japanese. Most of them agree on the above, and wished the apologies come with reparations. To apologize only is hypocrisy and an easy way out.


THE FUTILITY OF WAR; 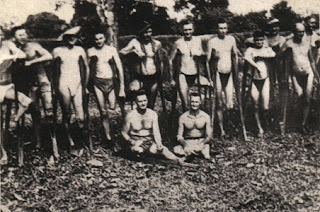 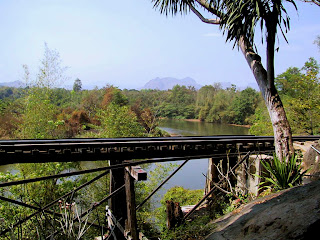 I heard ten thousand mothers weeping
For their sons so far away.
I dreamed ten thousand sweat hearts sighing,
As they hope, and wait, and pray.
Like an epitaph- the 'Infamous Railway,'
Haunted by the ghosts of men.
For every sleeper a life was taken,
A stairway from the depths of hell.
Perhaps there is some good in all men,
And may the passing years prove so.
Lord; let the tears shed by their mourning
Serve to let the whole world know.