One day I hope to visit my fathers grave.

One day I hope to go to Thailand, to visit my fathers grave. Maybe next year sometime. I like to see the River Kwai, it looks so peaceful now. I never got to know my father, he died building the Burma railroad tracks, working as a slave for the Japanese in world war 2. I was only 2 years old when he passed away. But lately it feels like I got to know him better, and I would like him to know, that we never forgot him, and never will. I like you to know Dad that our daughter Monique, your granddaughter is the spitting image of you. When I look at your picture I see your granddaughter. It is very sad that young men like my father never had a chance at life, but through my blog I hope your spirit stays alive and my children and grandchildren get to know you a little, you deserve it. 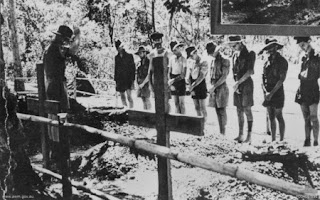 Everywhere in the jungle the grave-yards made their appearance. When the railway was completed at the end of October 1943, thousands of bodies lay in the jungle from one end of the railway to the other. My father was one of them. His friends had laid him to rest in Kuie, a small graveyard site, beside the railroad tracks.He died of total exhaustion,dehydration and starvation. A fellow prisoner Mr. Veenstra, told my mother about his last days.Mr. Veenstra was one of the lucky ones to survive this ordeal.
The prisoners lived their captivity as an endless nightmare and with no hope. Many died of despair. The fortunate to awaken from their ordeal were never the same again. The nightmares returned to haunt their sleep and the faces of those left behind have never left them.
We will never feel the pain they endured and fortunately we can awaken from the despair,that despair that became their living hell as Japanese POW's.
The most demanding part of the Death Railway with the largest loss of life was between Konyu and Hintok, where my father and his friend were. Rin Tin was the worst place to be.My father was there for three months, until the Japanese finally closed this camp,  because cholera had broken out, and they were afraid they would catch these diseases.This part of the railway track had taken a toll on my father. He had become a skeleton and suffered from dysentery.The hammer and tap method was used to cut through rock. The guards were very brutal as "SPEEDO" was being administered, one such cutting became known as Hellfire Pass. Most of this terrain is steep, strenuous up-hill.They were working from early morning to late evening. There they were trotting down the muddy track to their work on the railway in the middle of the jungle, with no way out. Their skeleton like forms fading into the jungle like living zombies, their thin arms and their dirty uniforms hanging in tatters. Some barefooted, without hats, literally dying on their feet and walking, shouting and bellowing followed the Japanese guards, their riffles slung over one shoulder and a bamboo stick in the other. 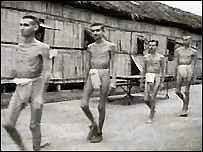 The Japanese seemed to have one thought here; if you are not working you are dying. Their one thought was the railway. It had to be built; nothing was to stand in the way. There were plenty prisoners.
It was shocking what happened there in the jungle on that railway. The monsoons had started and everywhere was mud; the huts were falling to pieces full of bugs, and all prisoners Dutch, English, Australians, looked dreadful. There they were slipping and sliding down the muddy track.
There was a smell of decay in the whole camp of stagnation. The camp hospital was another miserable hut, falling to pieces and inside lay the remnants of what once were fine young men, dying in loathsome squalor. The stench of bed-pans, the groans of the men with malaria, the dirty smell of sweaty clothing, the lice and the smell of bug infested bamboo-beds filled the air. The Japs had only one thought and that was the railway. Nothing would stand in their way. 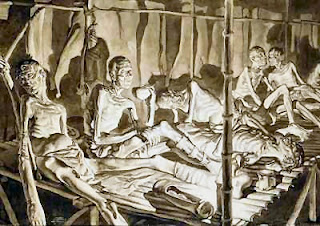 I came upon this poem written by Margaret Puffett, she visited the Tamarkan Bridge, on the River Kwai. Her father died as a POW working on the rail road line, and I hope she does not mind I post her poem here on my blog. This is for all the dads who did not make it back home.Never to be forgotten. 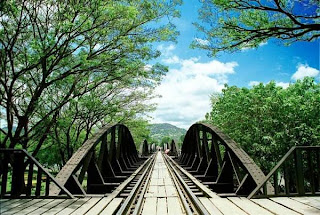 
I stood upon the famous bridge that spans the River Kwai,
I stood beside the rail-way tracks where so many had to die.
Beaten, starved, their spirits unbroken they worked from morn to night,
To build the Burma rail-way stretching on and out of sight.

The River Kwai flows silent now, its waters still and deep,
It saw it all but never tells the secrets that it keeps.
Across the Bridge beneath a tree I laid a tiny cross,
A small but loving token to commemorate my loss.

And in silence and serenity,I said my Prayer to God,
Was I standing on the spot where my father once had trod?
The men long gone, the rail-way tracks and bridge in memory stand,
A memorial to those who died in protection of our land.

They died to give us freedom, through the trouble, war and strife
And paid the greatest price of all, the sacrifice of LIFE!
A daughter visits the bridge on the River Kwai
"The memory# of that trip will stay with me forever!

The Bridge, the River and the Rail-way- so peaceful now,
It's hard to believe what went on here.
But to be able to lay flowers at the Railway and at the cemetery,
I felt Dad knew we still loved him, and never forgotten him. 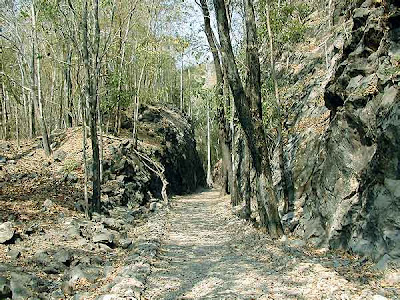