Justice for victims from former Dutch-Indies.

Elizabeth van Kampen forwarded this article to me, which was in the newspaper in The Netherlands
the"Trouw". 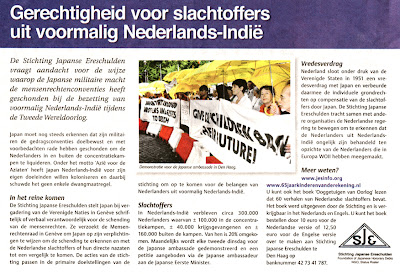 
The foundation of Japanese Honorable Debts, is asking for justice how the Japanese military forces had violated the Convention on Human Rights in former Dutch-Indies during World War II.


Japan still has not recognized that the Japanese military violated ' the Convention on Human Rights' purposeful and deliberately to liquidate all Dutch nationality in and outside the concentration camps.Under the slogan 'Asia for the Asians', Japan tried to colonize the Dutch-Indies for use of  its own purpose and would not shy away to use any certain coercive measure.

Come to terms with the past
The Foundation of Japanese Honorable Debts,accused Japan by a written verbal at a meeting of the United Nations in Geneva for violating the Convention of Human Right.The Foundation request that the council of the Convention on Human Right should point out to Japan that it has not recognized the obligations they owe to the Dutch victims or their next of kin. The purpose of the Foundation is to fight for the primarily aim of the interests from the former Dutch of the Dutch-Indies.

Victims
Before the war plus minus 300,000 Dutch lived in the Dutch-Indies. Plus minus 100,000 ended up in Japanese concentration camps, plus minus 40,000 were taken POW and plus minus 160,000 lived still outside the camps, 20% of these Dutch died. Every second Tuesday of the month a demonstration takes place in front of the Japanese embassy in The Hague and a petition is handed over to the Japanese ambassador the first Minister of Japan.

Peace treaty
The Netherlands signed a  peace treaty in 1951 with Japan, and forfeit all individual fundamentals of compensation to the victims from the Japanese Regime..The Foundation of  Honorable Debt is trying to organize together with other organizations to get the Dutch Government to realize that the Dutch from the Dutch-Indies did not receive any justification from the Dutch government and that they have not been treated like the Dutch in Europe in World War II.

You like to know more?
www.jesinfo.org
www.65jaarkinderenvanderekening.nl
You can read the book'Ooggetuigen van Oorlog' which has 60 stories from the Dutch victims.
You can order this book in Dutch or English. For 10 euro in Dutch and 12.50 euro in English.
You can send it to Stichting Japanse Ereschulden , The Hague.ABN-AMRO, bank number 42 73 42 787