Conclusion of Three men against Japan.

Jan did not wanted to wake up. He was dreaming about walking through the forest his horse by his side.A flock of parrots in the trees.The beautiful sunset behind the mountains. This is heaven, this is paradise. 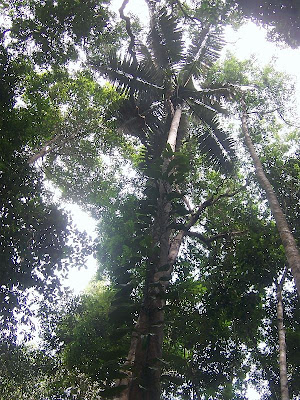 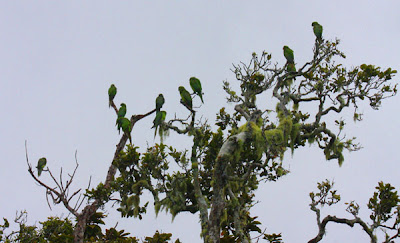 A flock of parrots at dusk. 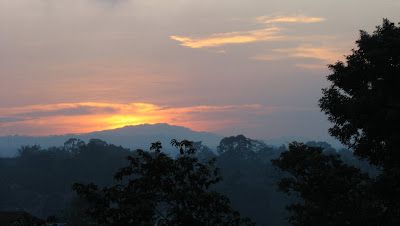 Beautiful sunsets over the mountains.In this world no war exists, here this word does not even exist in the dictionary.Only Mother Nature, we sometimes have to fight.


He could not wait to try to escape.The only difficulty was that Tuindersma's condition , already weakened before he arrived in this hellhole,had even more deteriorated through the ill-mistreatment and malnutrition.
One evening the Japanese guard arrived again, for a visit with the Chinese guy. He sat down and laid down his gun in front of him on the floor.
Without being perceived Jan got closer, where the two of them sat. When Jan lifted his hands to grab the Japanese by the throat, Tuindersma suddenly yelled:"No!..don't do it,..Jan!"
The Japanese jumped up. Although Jan had taken on an indifferent posture, the guard felt the strange and strained atmosphere.He took his weapon and disappeared.He never came back.
At the last moment Tuindersma had changed his mind.He was afraid that the Kempetai, if the escape would succeed,would take revenge, and punish the other prisoners. That's why at the last minute he decided against it.This decision would cost the brave and gallant officer his life.A few days later all prisoners had to assemble in the courtyard.Eleven names were called; the one who's name was called had to get ready..... Everybody knew what this meant.
There they stood, eleven of them, in the middle of the courtyard, including Tuindersma and Kelter.They stood there with their heads high, their faces white and serious.For the last time they gave their friends a handshake. It was the worst sad day since they had met, and had gone through months of resistance,terror,tension and danger together.The condemned men got into the standby motor-cars, a tarp hid them from the glances of their stunned friends.Jan tried to contain himself, but suddenly he burst out in sobs, when the cars with his friends disappeared from the gate, towards a senseless death.

Shortly after Jan was taken back to the internment camp; his two friends stayed behind, because of inexplicable reasons,they had to stay in prison. He only was back at the internment camp for two days, when he was ordered to get into a waiting truck.To his surprise the Tall guy and the Pimpel were in the truck, they were handcuffed to each other.They drove up to the building of the Japanese council of war and were interrogated by a Japanese officer. Jan took the stand and talked for the three of them.He had a good feeling that he had convinced the officer of their innocents.A few days later when they were waiting for their verdict in an internment camp in Batavia,where the leader was the notorious commandant Sonei, they heard their sentence: three years in prison.
Jan and the Pimpel where physical in decent shape, were taken to Sumatra, to work as convicts on a railroad track. The Tall guy's physical conditions was so weakened after all the abuse he received while in prison that he was not able to be used for slave work.They locked him up in a prison in Ambon.Here he met his destiny. Somehow somebody had been indiscreet, and the Kempetai on Java became aware of their illegal actions, which the three of them committed.A new criminal case was opened and all three got the death penalty.The Tall guy was dragged from his prison cell in Ambon and died in front of a firing squad in Batavia.As a hero he gave his young life.
The other two,Jan and the Pimpel, thanks to poorly administration from the Japanese, where not to be traced.
This is where the story ends about the three friends. Jan Luxinger returned to the Netherlands and worked at an large firm in Amsterdam.
The Pimpel was not able to say goodbye to the Dutch-Indies; he went back in the army, and as a corporal with the cavalry, he became active in the police force. 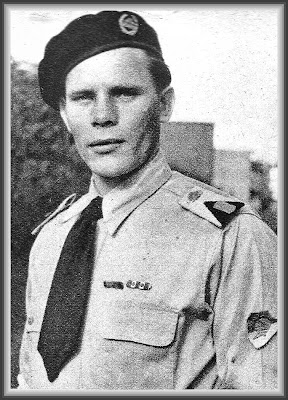 This is the man, who was called the Pimpel. After the war and his precarious adventures with his friends, during the occupation of Java, he went back in the military and became a Corporal with the cavalry.


This story is dedicated to all the Dutch men, who carried the load against the Japanese, under the heat of the tropical sun. This story had to be told as a thank you for those who lost their lives on Java and elsewhere in the archipelago,and died for the Dutch East Indies.
This story is for those who's battle, suffering and death, often only witnessed by the rustle of the palm trees or the walls of their prison cell.May they rest in peace, whether in a war cemetery,or never be found, or some where in the jungle, or in an unmarked grave.
May they rest in Peace.
With hatred they were murdered by the usurper, their houses plundered and destroyed, their family pulled apart,often not even one single photograph was spared.
But in the rustle of the paddy and the wave of the palms in the breeze, they will live forever and they will never be forgotten.
May their father-land realize what they owe their sons, their country will be forever in debt!
They cannot remunerate those who died, but to those, who were their loved ones,and who they thought off in their last moments of their life, are still in our midst.They are the ones who are in need of support.

It's very sad to say, but that never happened! 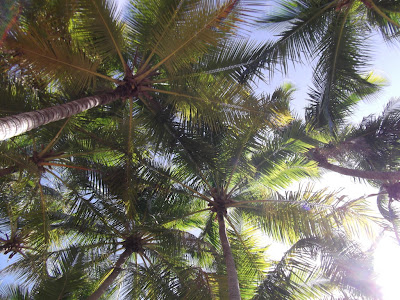 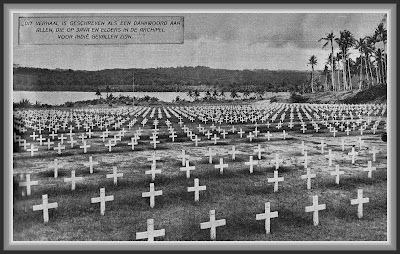 A War Cemetery in Indonesia. May they rest in peace. 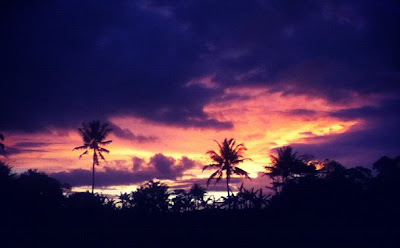 The sky turns into the color red, on the cemetery in Indonesia. 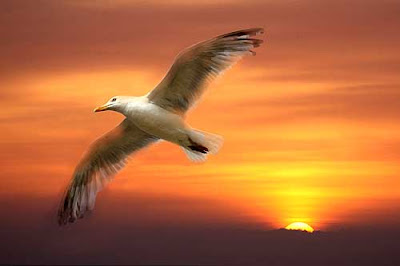 A lonely seagull keeps guard over the cemetery.

My father and my uncle died for their country, my mother and my aunt with their children, suffered terrible in Japanese prison camps,they never received support.All they heard was:" Get on with your life, look at the future, forget the past!"

Now can anybody tell me how you do that?

They never did...yes they got on with their lives, but for the sake of their children.They never were able to leave that part of their lives behind.They forgave, but they could never forget.

Many people today still say; oh get on with it, forget it!

Just let me remind you what George Santayana said:

George Santayana reminds us that the lessons of history are invaluable"Those who forget the past, are condemned to repeat it".

After the war captain Sonei was tried for war-crimes, and executed by firing squad. He was tried before the Dutch Council of War in Batavia. 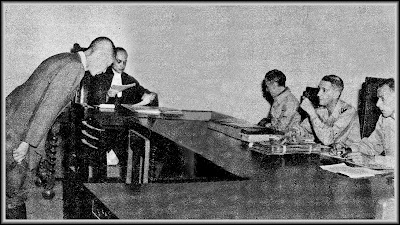 Captain Sonei appeared in front of the Dutch Council of War and takes a humble bow. 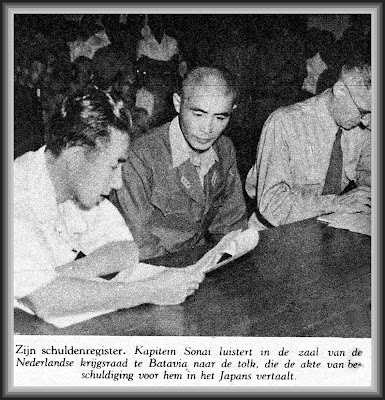 Captain Sonei listens to the Dutch Council of War in Batavia.

The number of people who could testify to this monster was so overwhelming that nothing could save him.

This Japanese man was one of many Japanese who committed war crimes. Even their own men admitted being scared of him. They described him as a psychopath.
Captain Sonei described himself as a civilized and cultured man.
He was a brutal and sadistic man, who delighted in humiliation and torture of his victims, a maniac who outdid himself in cruelty and perversion.

There were many of them. Often being very mean to their own kind. The military had chosen them well.They would do anything for their emperor of Japan. 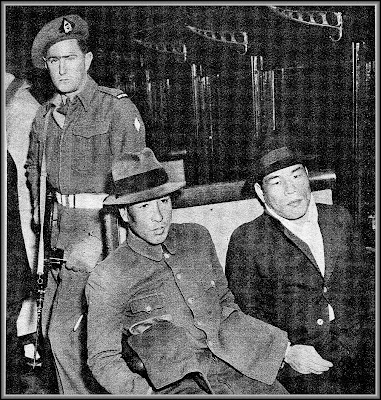 On their way to the Council of War. Japanese war criminals. The roles are reversed. These two were taken from Tokyo to Singapore and were guilty of ferocious crimes against military and internees from different countries in South-East-Asia

Three men against Japan brings the horror and losses of World War II in Java off the battlefields and military POW camps back to my past. My mother, was separated from her husband and my father taken away from me.We never saw him again.Forced into Japanese prison camps in 1942, where my mother and her sister, with their young children would suffer until the end of 1945.We endured starvation, disease, isolation and uncertainty for three and a half year.
Civilian suffering in war is an under-explored topic but nothing illustrates wartime anguish more than the stories of innocents.
Three men against Japan is an inspiring story about the human spirit and the resiliency that can be found in families.

Soekaboemi,a picturesque mountain village, suffered tremendously during the war, in the hands of thugs and after the capitulation of Japan it was destroyed and looted by the extremists. 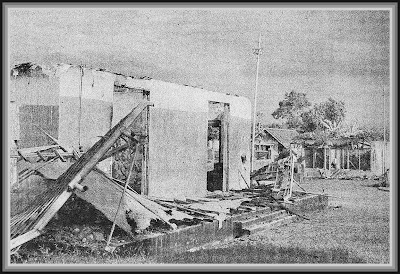 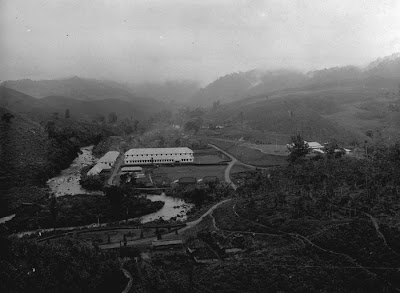 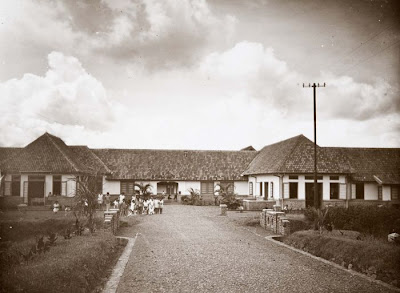 A school for girls in Soekaboemi before the war. 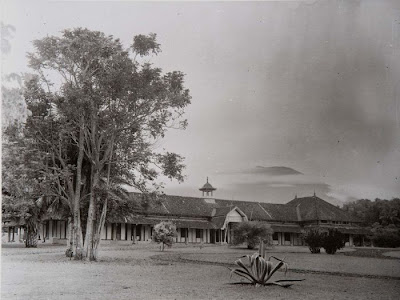 A cultivation school in Soekaboemi, before the war. 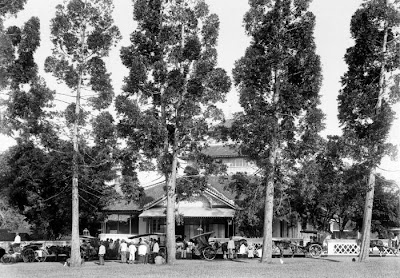 A Wedding-procession in front of a Mosque in Soekaboemi, before the war. 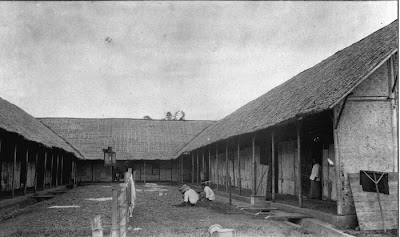 Hospital of the Police in Soekaboemi, before the war.
Posted by Thea at 11:45 AM