A fight between the Japanese and the guerrilla fighters on the hills of the volcano Salak.
Caught and in the hands of the barbaric Kempetai. 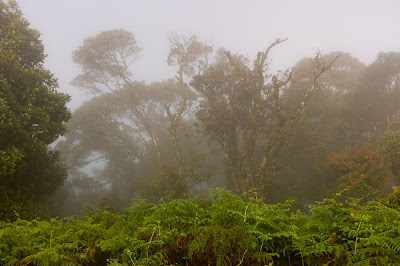 The rain had stopped and the walk back through the cassave fields and the forest went without any incidents.Except for some leeches, nasty things!
Arriving back at the barbwire they noticed that the Japanese patrol were back at their posts.After the rain had stopped they were walking their one hundred steps back and forwards by the light of the search-lights.They had to get back into the camp.It would be a disaster for the organization if they would not be at the roll call tomorrow morning."We have to get into the camp," whispered Jan, while they were lying on the ground in front of the barbwire.The footsteps from the guard came closer.His shadow passed over them. As a flash of lightening Jan crawled through the discharge gutter towards the fence,jumped up against the tough bamboo and as if he had a jumping-pole he flew over the fence.The Pimpel followed suit, but while he climbed over the fence, one of the bamboo poles broke. The guard had returned and came closer.Jan and the Pimpel were holding their breath. The guard passed them......that's when they signaled the Tall guy, he crawled as low and as fast as he could through the gutter, reached for the fence and climbed over. But now the bamboo pole broke all the way and the fence not having the support of the pole anymore fell over.The Tall guy, was sitting on top of the fallen fence, and was an easy target for the guards.An uncontrollable quiet laughter kept the Tall guy from moving; he was shaking so much that the bamboo was squeaking. The mocking humor of his situation had such an hold of him; he could not stop thinking how funny it was that he was trying so hard to get back into the prison camp! With a quick move the two others grabbed his legs and pulled him down from the half broken fence not a second to soon. On the other site of the fence they heard the nervous voices from the guards,at the spot where the bamboo had partial sagged down.They ran to their barracks, undressed, hid their muddy clothes and threw themselves on their mattresses. Just when they pretended that they were fast asleep, the shrill alarm signals sounded through the whole camp. A roll call was taking place in the middle of the night.Nobody was missing. A new puzzle for the Japanese, that was never resolved.
The next morning the camp was still troubled because of the unexpected roll call.Jan understood that an another escape was going to be very difficult.He decided that only he and the Tall guy should go on their next expedition.While he was thinking about which was the best way to leave the camp and how to get back in, he noticed in a corner from the building a ladder.
With help from the ladder, and the Pimpel and one more trustworthy internment, the two of them were able to climb into the tree.The branches gave them protection from the area with the searchlights.While the guards were walking back and forth, Jan and the Tall guy climbed over the thickest branches from the tree and jumped over the barbwire on the ground on the other side.They arrived at the house from Slijkhuis without incidents. However Jan could only give him a small amount of the promised money,the organization was short of money at the moment, said Smit. He was waiting for a large sum of money from the outside, and they were working at it how to smuggle this money inside the camp.Slijkhuis was not very happy that he had to wait so lang for his money; he was very nervous and extremely irritable.He claimed that a hadji, who lived across the road, was keeping an eye on him. Jan had gone outside and saw a few shadows moving about in the yard from the hadji they moved in a wide circle around the house from Slijkhuis they looked suspicious.He told Slijkhuis that he was right he had to watch out for his neighbor across the road.Do not believe anything, I think they are two faced.Before they went on their way back Jan promised again to discuss the money question with Smit.Both men were now in the position of a gun,Slijkhuis had received a note from the captain to hand them each a gun.
It was still too early to return back to the camp; the Pimpel and the other man would not be back on their post.Through the cassave-fields they walked in the direction of the highway and arrived at a house of one of Jan's best friends.Light was on everywhere,Jan knocked on the door but nobody answered.Jan kept knocking on the door, after awhile he heard the voice of his friend who told his quests they had to leave, he wished no visitors tonight.Surprised and disappointed the friends left.Later they heard that that afternoon one of the family had passed away.
It was still not time to go back to the camp.They walked to the stables from the Japanese cavalry, they liked to have a look at the horses, which they might have to use later, when Smit had his plan ready.As far as they knew no guards were at the stables; they walked over a small path, which led to the dark buildings. 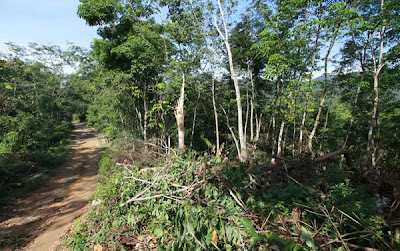 They arrived at a place where some lights were on and the Tall guy stood still. Jan however kept walking.Suddenly in the distance Jan saw two Japanese soldiers coming his way. It seemed that the stables were being guarded anyway.Jan stood still not knowing what to do. If he kept walking towards them he would surely been questioned and they would discover that he escaped the camp.Running away was not a good idea either, that would for sure be suspicious. One of the Japanese called out to him,and asked who he was, Jan turned around and walked slowly back the way he had come from.His body tense, he expected to be shot any moment. It seemed endless to return to where the Tall guy had stopped.Suddenly he noticed him standing in the bushes. Jan took a big leap into the bushes and pulling the Tall guy with him. They ran further into the thick brushwood. 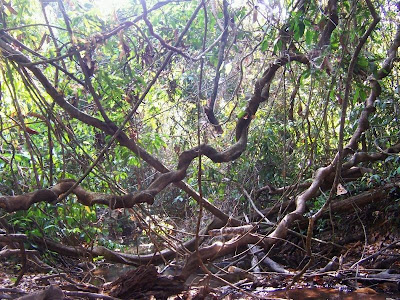 Behind them they heard shots and screams from the Japanese soldiers.To make sure the soldiers would not suspect that they were escaped from the camp they ran in to the opposite direction.The Japanese were following them, they heard branches breaking and the Japanese were getting closer. Suddenly they arrived at a large ditch.Without hesitating they went into the water which reached up to their shoulders. Quickly they pulled some sword-grass over their heads and stood still, as if they were some river-god statues, but their hearts were racing in their chests.The enemy had now reached the ditch, they shined their torches over the water and on the outlines of the ditch.
There was a big chance that they could get bitten any moment by one of the many reptiles which lived in these ditches.When the Japanese finally could not figure out which way the escaped victims had gone, they continued their chase in the opposite direction.The two Dutch men were in no time at the friendly tree, which was their safety bridge....into the prison camp.They imitated the call of a screech-owl, and they heard the others on the other site of the fence.In no time they were back in the barracks, with shattering teeth they took off their wet clothes.
How they longed to be free again and enjoy an evening sitting on their veranda watching the beautiful sunset over the mountains.Why was this all happening? Why were people making life so miserable! 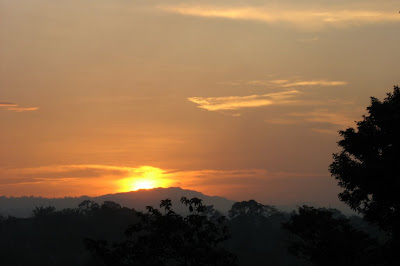 The next day Jan talked to Smit and told him what had happened the night before.

A few days later they received the devastating news that Mr. Slijkhuis was arrested. His neighbor hadji across the road had betrayed him. Still worse was the fact that thirty Japanese had dug up the whole garden and had found all the guns.
For the organization some days of panic followed. They heard that Slijkhuis was being tortured mercilessness; it would not take long for him to talk. Jan discussed a plan to escape. But Smit wished that they had to wait.After two weeks of torture, the Kempetai had not gotten one single name from Slijkhuis.They all decided to wait a few more days before they would try to escape the camp.Smit was waiting anxiously of word from the outside,which did not come.After four days Jan told the captain that he could not longer wait with the plans to escape; they would try to break out the next night with eight men.They were in the possession of three guns and liked to join the guerrillas in the mountains of the volcano Salak.They had heard that a group of guerrilla fighters were active again and were hiding in the mountains. 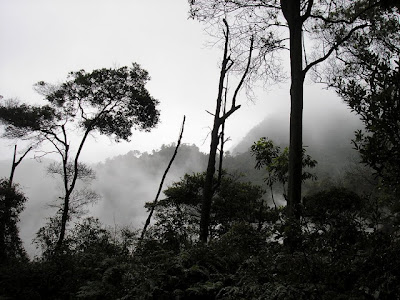 But in the afternoon on the night before they were planning to escape the camp something happened.Suddenly from the hills of the volcano Salak came the sound of heavy artillery. The ground shook from explosions from airplane bombers. From the camp they saw Japanese bombers target the hills of the mountain Salak. 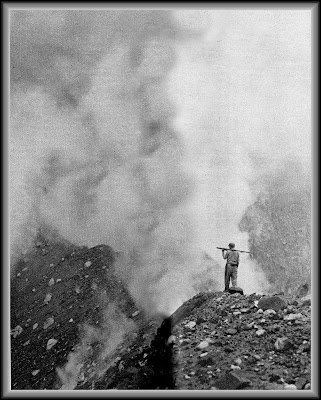 A lonely guerrilla fighter at the edge of the volcano Salak. West Java.

In the evening it became quiet again., and the first rumors entered the camp.The guerrilla fighters had planned an attack on the town. That was the message Smit had waited for.The Japanese espionage had discovered the plan and the Japanese had fired at a small kampung-village which was the outpost of the guerrilla fighters, and for an hour they had fired at the kampung and killed about three hundred natives. 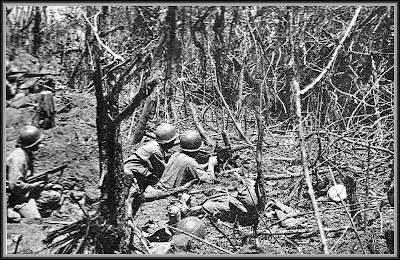 Around eighty guerrilla fighters were taken prison.But the Japanese had suffered many losses as well. Many were taken to an emergency hospital, they figured there were about thirty dead and seventy wounded.The guerrilla fighters were chained together and driven through the streets of Buitenzorg; the residents had to see how powerful the Japanese were, and how difficult it was to fight the Nippons. 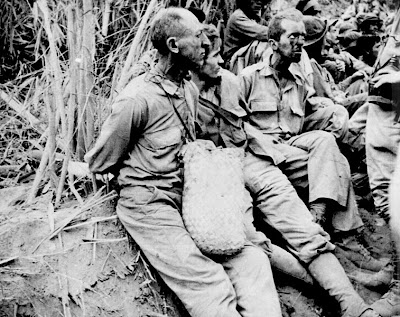 Jan had no hope that his escape plans would succeed, after this defeat. The camp was now guarded by more then three hundred soldiers, around the fence the Japanese had put up machine gun posts.There was no chance to escape. That same night they had a meeting with Smit and they discussed;in case one of them would ever be caught and questioned by the Kempetai, they would all give the same explanation.

When Jan as usually early in the morning, planned to go to the river to take a bath, where part of the river was fenced in specially for the purpose so the prisoners could bath, he was stopped by four Japanese soldiers and was told that from now on it was forbidden to get near the river.

next: Barbaric practices by the Kempetai--The last days in prison--Eleven Dutch men in front of a fire squad--The end of the Tall guy.
Posted by Thea at 5:43 PM