A scary night-----Attacked by rampokkers (thugs who were worked up by the Japanese) they engaged in robbing and murdering white people during world war II, when the Dutch Indies was invaded by Japan.

It so happened that just this night when Lagewind is not here; Jan mumbles to himself, while he sat strait up in bed, and listened. But all around the house it was quiet,the stifling of a tropical night with all it's usual noises from an animal in the distance in the forest, the sound of rustles from bats on the veranda, and the sound of crickets on the lawn. 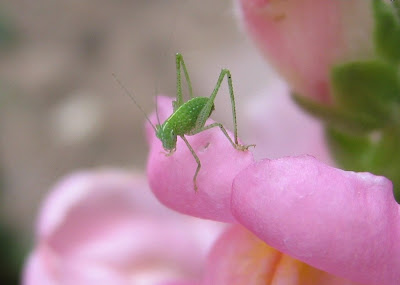 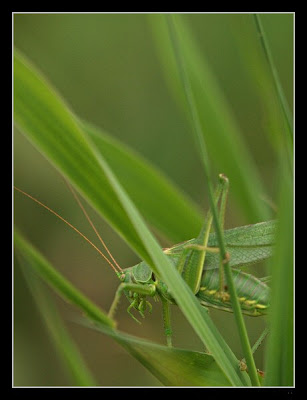 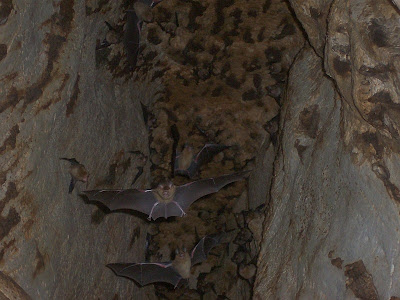 every night bats will be seen at the veranda, catching mosquito's

I must have been mistaken; Jan thought.Nevertheless he closed his book, laid it down on his night table and set on the edge of his bed.Since a few weeks, after it was brought to their attention that thugs were in the neighborhood of the plantation, Jan had decided to sleep in the office where the safe from the concern was located.You can't say he slept, he would read by a little light of a standing lamp, sometimes falling in a light sleep while reading his book. In the morning when the crow of the roosters and the cackling of the chickens in the chicken coop behind the office could be heard, he would finally fall asleep, and wake up when the sun had risen for hours,by a friendly knock on the door. 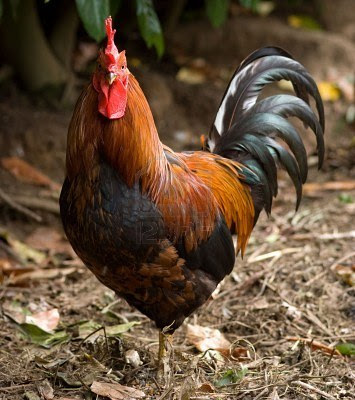 His hostess would stand there with a nice cup of coffee.
Just about when Jan picked up his book again he heard again strange sounds, sounds which did not belong in the tropical night.Now he heard something near the side of the outbuildings,where Jan now had his sleeping quarters in the office.This time he knows for sure he was not mistaken.He can hear clearly the sound of bare feet sliding on the tiles of the veranda. Without making a noise he jumps from his bed and tip toes to the door. Again it is very quiet.He knows he is not mistaken he had heard something. The mauser-pistol has been hidden somewhere else and he cannot reach it, no time to warn Mr. Brinck.He sits back on his bed and wait. The feeling and instinct from being in the jungle for months tells him of a presence of an invisible enemy. Behind him his blew gun hangs on the wall, and in front of him on a shelf are a few acid grenades, he and Lagewind made.Suddenly he sees the door knop moving,ever so slightly. The door is locked.The intruder must have noticed, because now Jan hears a soft creak, as if a body tries to push the door.He takes hold of one of the handmade grenades, walks up to the door, turns the key in the lock and screams very loud:"Boleh masock!"(Come inside!)Even with the door still closed he could feel the consternation outside.He hears the sound of shoveling bare feet and whispering voices. With a jerk he opens the door. In front of him he sees a number of men. He throws the acid bulbs to their feet on the tiled floor and closed the door quickly.He can hear the sound of loud screams of pain, and limping feet trying to get away over the granite paving-stones. A few minutes later he hears again screams of pain and calling for help. Jan understands that those who were wounded by the acid bulbs had stumbled to the nearby river on the bottom of the hill, to try to get the acid washed off their feet, not knowing that the water would intensify the pain even more. 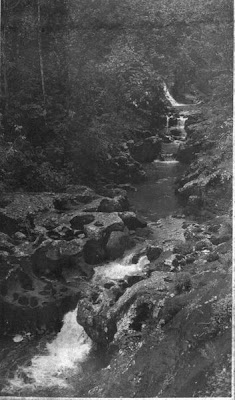 He opens the door and stands on the veranda.Carefully he steps around the acid on the floor and walks up to the main building. On the front veranda are Mr. Brinck and van Wou under the bright lamp lights, an easy target for shooters in the shadows.
"Go inside!"Jan screams. And while one of them keeps guard, they discuss the situation. Mrs. Brinck equal match with the men in spirit, would like to go and chase the thugs, but the men convince her that this would be useless and dangerous, the forests are too overgrown. 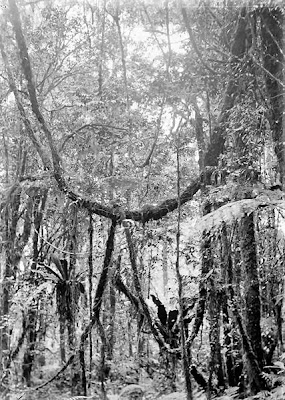 The forest is too overgrown. 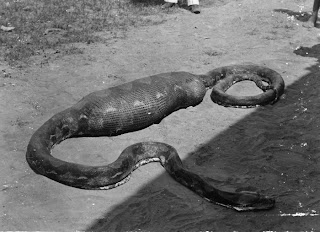 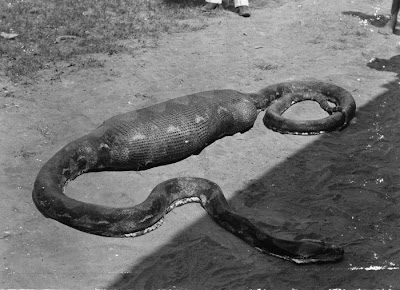 You could run into a python, who can swallow a large animal.

For an hour everything seems quiet, and it looks like the enemy are driven away.They decided to go back to their sleeping quarters.For another hour Jan is wide awake,he can't hear nothing suspicious.
Suddenly he is startled from a light sleep.Again his instincts are warning him. There are strange sounds, this time between the outbuildings and the forest, where the chicken-coops are. 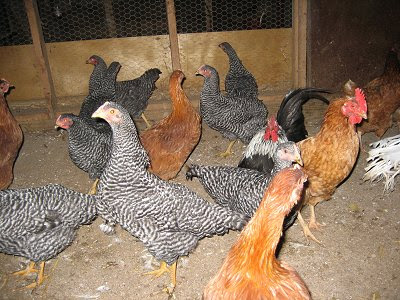 He hears the sound of gabble form scary chickens.At the same moment a knock on the door, and a voice in speaking malay, that he has to open the door immediately."We have instructions from the Japanese to search this concern", a stern voice shouts.Jan already has jumped out of his bed.He stands in front of the shelf with the acid-bulbs and holds the blow gun in his hands. With a loud voice he calls:" Well in that case come inside, if you have the courage!"Now they are hitting the wooden shutters from the windows. The wood splinters are flying around. Now it's getting too real, Jan is thinking.If they come in from two sides from the windows and the door, I am in trouble.With one step he is at the door and opens the door with all his force.In the shadows of the night he sees a group of men, who are coming forward,they are threateningly close.A heavy stone nearly hits Jan's head and falls behind him on the floor. Now Jan throws his homemade hand grenades to the attackers. The acid splashes every where. The thugs pull backwards, some of them wounded and screaming loud.The whole place in front of his door, looks like a river of acid. Jan closes his door and locks it. The blows on the windows are now so bad that the shutters are breaking down.Jan picked up an old Chinese broadsword, which was hanging on the wall,and in his other hand he holds a few acid bulbs. 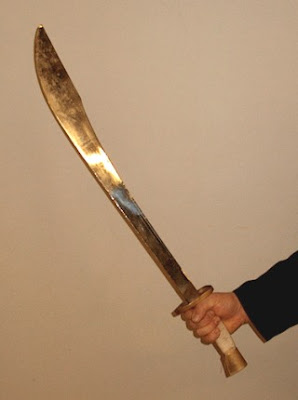 With full force he pulls one of the shutters open. One of the thugs had climbed up onto the window frame and was ready to jump into the room.But quick as lightening Jan throws with full force an acid bulb against his chest. With a cry of pain the native falls backwards into the garden and rolls screaming over the ground.Jan now throws all his acid bulbs at the thugs. He tries to throw them as low as he can, so only their legs would be wounded. They fled as fast as they could, and Jan uses his blow gun to shoot some arrows at the fleeing legs.The arrows are not poison, but they scared the living daylight out of the reckless bandits.Jan quickly closes his windows on both sides of the room; outside he hears the sound of moans from the wounded thugs. A few minutes later he hears some whispering close to his windows, the thugs are picking up their wounded comrades from the battle zone.
A few hours later the hot sun is shining down on the gardens from the concern.Except the acid and the broken shutters, nothing shows of the attack at night. But when Jan starts his normal inspection expedition, he discovers in the vicinity of some native houses two mutilated corpses along side the brim of the road.With difficulty he hears from some fearful onlookers the accounts of what had happened here.The two dead men belonged to the thugs who had tried to burn down the factory, but the night keeper from the concern had caught them and had alarmed his co-workers.A large group of the workers from the concern had attacked the two men and full of anger had killed them.Jan thanked the employees for being so loyal and ordered them to bury the two dead men. He requested to one of the employees to call the mandoer (Indies superindendent) ""Why are you not at work?" Jan asked the short, dark man,who slowly and limping came closer.Jan noticed that he was protecting one of his legs."What happened to your foot?" The wound is not bad, and Jan makes sure it is taken care off. Then he takes him to the office for questioning. First the' mandoer' is keeping silent and does not say a word, but Jan keeps questioning him and when he promised not to tell Mr. Brinck, he tells Jan the story about the attack.
Abdoel Kamari, the man of the Tiga-A. was the leader of the attack. The 'mandoer' while threatened had told them where the safe was hidden.After hearing the story of the 'mandoer' Jan let him go but not without a serious warning.
When Lagewind comes back that late afternoon, Jan tells him the happenings from that night. Lagewind being an inspector of police arrest Abdoel Kamari.
After that the peace is restored at the concern. But now another danger is luring, and comes closer and closer. Shortly after the attack, the Europeans from the concern, except Lagewind,received notice to register in Pelaboean. It looked like that after the registration they would for sure immediately be internment.