After Jan and the Tall guy had embraced each other, they quickly went inside the house. Once inside the Tall guy told his story. He, and the Pimpel and their two native friends had gone to Tjiawi to say hello to a friend.The first thing they heard was that the whole area was closed off by the village police and the Japanese. The two native friends were right away hired as gardeners, and the Pimpel and the Tall guy washed and shaved themselves in no time and had cut each others hair.The two natives who were now gardeners, had gone on a scouting trip, and informed them that each house was going to be thoroughly searched. There was no way out. Fifteen minutes later the two white friends were picked up and on their way to a camp.The encampment was not too bad, every one had a proper sleeping place and in the garden was room enough to move.
The food was adequate, but bad.The internees were allowed to receive packages, but because the two friends were not from this town they received nothing. Jan asked who else were there from their comrades in arms.Many members from the Kelter-organization were in the same camp. Jan told the Tall guy that it was going to be his mission to find out,who these important figures are.If it comes to a possible action, those are the ones we have to inform immediately.
Unperceived the Tall guy went back to the camp.Jan left the following day back to Tjibitoeng. He was accompanied by a man,because of the man's credentials,Jan thought he was going to be very useful.His name was Van Wou, he was a veterinary surgeon and had been an officer of the yellow riders. He had been in the Netherlands when the Germans invaded that country.Shortly after the occupancy he left the country by way of Bordeaux into England and had received further training in modern warfare.Just before the war with Japan, he was send to the Indies,where he had worked for the veterinary college in Buitenzorg. 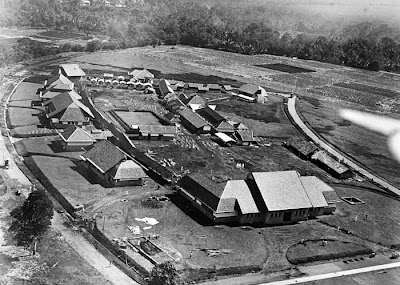 The veterinary college in Buitenzorg in The Dutch East Indies.(now Indonesia)

He was a relative of the Kelter and was anxious to work for the resistance and for the liberation of Java.The two men traveled from the small train station in Batoe Toelis , just outside Buitenzorg, to a still smaller train station Tjibadak, a few miles from Soekaboemi. They were lucky, that day there was no control in the over-crowded train. 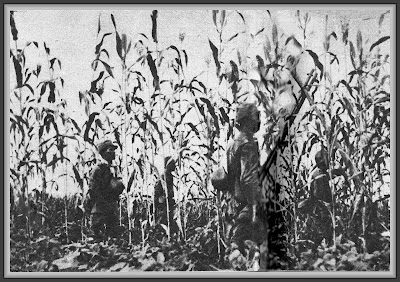 While nature on Java made it easy to hide, it still was difficult for the white men. They were easy to spot between a population which was mostly brown. Japanese patrols were always on the look out to try to find the men from the resistance and white people in hiding.
On the picture; Japanese soldiers search in a corn field.

From Tjibadak Jan called Mr. Brinck at Tjibitoeng, and asked if he could bring a friend and introduce to him.
That afternoon they all were sitting on the veranda from Mr. Brincks hospitably home.After dinner Jan left again in the direction of Soekaboemi. He had a long talk with Smit which lasted well into the night.One of the numerous subjects was the discussion of the mysterious figure of the police inspector Lagewind.Smit had accurate information, that the man's patriotic inclination and honest intentions were real, and he could be trusted.
When Jan arrived back at Tjibitoeng, the first thing he did , was to look for the police man and had a very confidential conversation with him.The mutual mistrust disappeared instantly.Jan introduced Lagewind with the plans he and Smit had discussed,Lagewind promised with complete enthusiasm his full co-operation.
Life continued, each day started like the day before. But Jan had no complains about idleness.The dwindling of the supply of oil for the diesel engines was a worry which gradually was becoming a big problem.Mr. Brinck made up his mind and had to close the factory for the time being. They had to reserve some oil for electricity for the buildings.How long could they last, and when would all this misery be over?
Jan who's trade was mechanical engineer,worked out a plan for a waterwheel, which could drive the generator and deliver electricity. 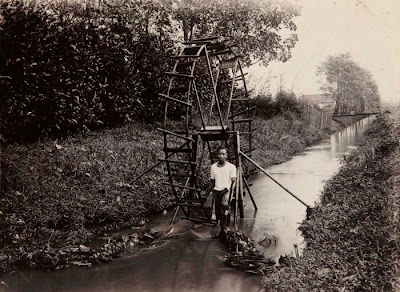 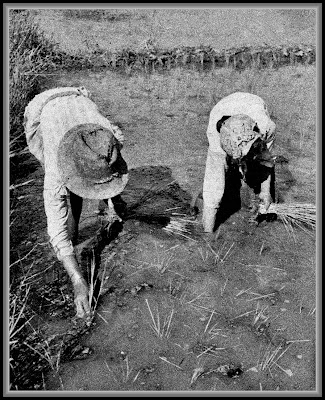 In front of the entrance from the concern were the rice-fields. Two Javanese employees are planting the padi plants.

Jan worked with a group of Javanese employees to carry out the plan for the water-wheel.They dug a deep trench, which had to carry water from the river to the water-wheel.After a week of hard work , the water-wheel was not powerful enough to work the machines from the factory.Mr. Brinck now put all his employees to work in the gardens.He was not able to pay them, but instead paid them with rice,for which they were very thankful. Food was getting scarce, and life was getting difficult.The people from Tjibitoeng had a very care-free existence before the shadows of two dangers slowly came closer. One was coming slow but sure closer, the internment of all white-people, which was happening all over Java and soon all blanda's would lose their freedom. The other danger was the unknown, not less threatening.That danger came from the rampok bandits, who unexpected attacked concerns all over Java, and murdered everyone in their way and plundered
and destroyed everything.Jan discussed this threat with Lagewind , what could they do to keep this danger at bay. They did not have enough weapons. They experimented many hours. In the closed factory were many faulty electric lamps.They took out the screw-fittings from the bulbs and very careful they took out the glass sticks with the glow wires.With help from a pipette(medicine dropper, or eye dropper), they filled the empty bulbs with acid and closed the bulbs with melted paraffin wax, which would coagulate and form a secure closed seal. 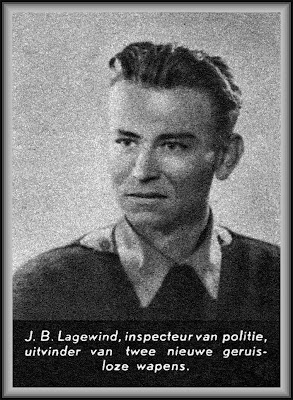 The bulb could be safely taken in the hand; with a slightly hard contact with a object the glass would burst and the acid would do the rest.The two men made some fifty of these fearful weapons.
One day Lagewind came up with a new invention, a wind instrument. He had made one from a long piece of electric pipe. The arrows he had made from the spokes of a wheel from a bike and on the end he had fixed a barbed hook.After lots of tries and experiments the wind instrument became a weapon, which would serve them well against primitive armed bandits. 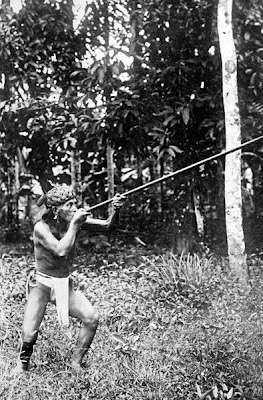 Lagewind was able to hit an object from meters away.Jan made himself one as well.He suited the instrument with nick and grain and he too became very handy in using this instrument. The arrows could reach such a speed, that from a 20 meter distance the arrow had to be pulled out a tree with pliers.The blowgun had one plus point, when used it made no sound so the enemy had no idea from which direction he was attacked.
They still were experimenting with the water wheel. One day it broke down, a few paddle-boards had come lose. Jan already had started to build a stronger wheel, when Lagewind came up with a process, to make gasoline from rubber.
With permission from Mr. Brinck they build an installation in the factory, and indeed they were making from distilled rubber a very high grade octane gas.After a couple successful experimentation, which were taken to try to better the product, they had to their disposal a large amount of fuel for the diesel engines.But soon it looked like this fuel had one negative side. It existed of an enormous gummy scale , which was vital on the part of the engines.The residue was given to the employees and natives in the neighborhood, for use in their paraffin-lamps, a welcome gift, because paraffin was not available anymore.
Lagewind send a sample of his rubber gasoline to the Japanese authority.The purpose was that he hoped the Japanese would order this product: their engines would be, if they did not keep up with the repair get into trouble. This would be a significant triumph in sabotage. The Japanese indeed have experimented with this rubber gasoline,but for unknown reasons they never ordered this gas on a great scale.
Jan's life on Tjibitoeng was full of various activity.But while he was doing all this work at the concern he did not forget about his other dedication.In between he did many trips in the neighboring towns, and recorded everything what was important for the organization to know.He knew of every single white man in the vicinity.All this information was taken to Smit, via connections, who Jan once in awhile visited in big secret. 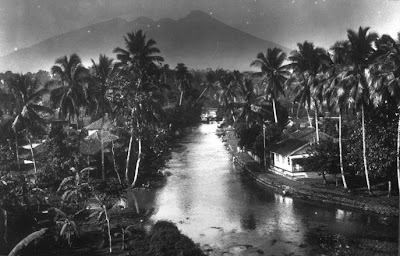 View from Hotel Bellevue in Buitenzorg. 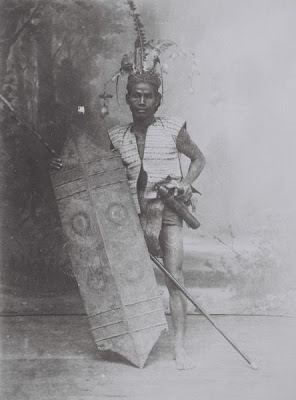 A hunter posing with his blow gun (Blaasroer) and a tube with poison arrows. 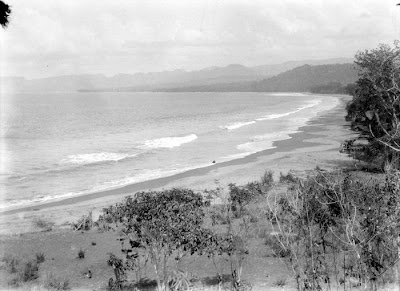 view over Wijnkoopbaai, where Jan and his four friends had a close encounter with the Japanese marine. 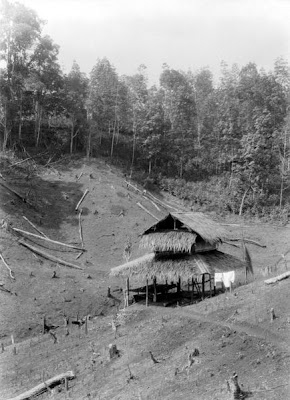 Hut at the rubber plantation


explanation: Tiga-A-Movement was supported by the Japanese Imperial Army.
Japan also propagated the theory of "mutual ancestry" (LOL) with native Indo-Malay population in the South-Pacific. It was a propaganda scheme manufactured in the name of Greater East-Asia Co-Prosperity Sphere". (LOL)
Will continue:
Next: An attack at the concern by rampok bandits who are getting a taste of the "acid home made grenades".Jan's last night spend in freedom.Locked up in a camp.
Posted by Thea at 7:38 PM