The Dutch East Indies where I was born.

We were living in Bandoeng when Japan invaded the Dutch East Indies.The year was 1942, March 7.My father had told my mother to go to her sister in Soerabaja.He would feel a lot better knowing that the sisters would be together during this horrible time. My father was with the KNIL cavalry. The Dutch Indies was then a Dutch colony.

After the attack on Pearl Harbor on December 7, 1941, our lives would drastically change.
At the end of December 1941 my mother received the sad news from her sister, who lived in Soerabaja that her husband had been killed. All crew members, but one were killed when their submarine the 016 run a mine. My mothers sister was pregnant with her second child and my father send my mother to Soerabaja to be with her sister. She never saw her husband again, and my mother was never able to go back to Bandoeng. In May 1942 my mothers sister gave birth to a little girl and soon after that we were taken to so called Japanese protection camps. Some protection camps these were, it felt like we had entered hell.


We arrived in camp Moentilan, which had been a catholic training college. This camp was lying on the road to Magelang to Jogjakarta, on the foot of the volcano the "Merapi".


.
Everything I am writing, is from what little my mother told me and what I heard when she and her sister were talking about it without knowing I was listening. 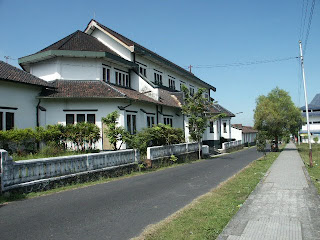 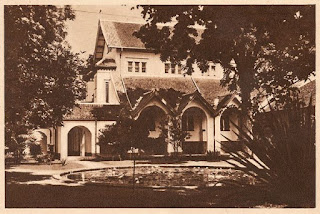 When I stumbled on this picture from the building in Moentilan, I had to cry, because to my big surprise this was the camp,and the buildings I could remember. I always tried to describe it to my mother and drew pictures of it. This was the Japanese prison camp where we were held for over three years.
My mother always was surprised, how in detail I could describe this camp to her. This was the camp I could remember most, specially this building which was the church on the compound which the Japanese used as their office. Terrible things happened in this church. I remember my mother once coming from that church and she had blood all over her and she was crying.She told me she fell and that's why she was bleeding. It must have been so horrific for me that I was never able to forget this. I asked her so many times about it when I got older, she always told me the same story. All she would say:" I fell". end of story.
We were taken to this camp around the middle of 1942 till about the end of July 1945.We slept on wooden shelves with a mattress on it, which were full of bugs. I hated the (kakkerlakken) cockroaches, they could fly, and were so big. My mother liked the lizards, because she said they ate the mosquitoes. She always said, look Thea they look like little doggies.(I loved dogs, we had a dog before the war) our dog always slept under my baby crib. I did not like these little doggies, because they fell sometimes on you, and they felt so cold. I would scream!.

The asphalt road, you see on the picture, used to be gravel, and the pedestrian path that was where the fence was. I can remember the white stone wall with open pillars so specifically, it boggles my mind. This was the prison camp where I tried to get some food from the Javanese people through a hole in the fence. I got an old bra from my mother(at the time she was so sick) she told me to try to get some food for it. The Japanese guard thought I was just playing and did not think anything about it that I was so close to the fence. I was only three years old.When I came home with the little package(pisangblad)the locals wrapped the food in these banana leaves, there was a stone in it.My mother had told me that you have to hold on to the bra until you get the package. Some women came back with their arms  scraped open, because they would not let go of their piece of cloth. Many of them got infections.How disappointed I was that I received a stone.
My mother told me that she was always afraid of the volcano the Merapi: she said that the ground was sometimes shaking.She said always the "Gods must be restless". Something will happen, some day.
The women had to work very hard. They had to do the most stupid things, just to make them tired.
Everybody had to learn how to count to ten in Japanese. If you did not do it right and had forgotten some of the numbers, you got a severe beating.How is it possible for a young child to remember some of these things. Why did they spank big people? These big people got whipped with a bamboo rod. I know they were crying, and I was hiding behind my mothers skirt. It looked like the "Japs" could not talk normal; they always had to scream very loud. They probably screamed, because we could not understand their language, so if they screamed they thought we must understand what they were saying.They were very cruel and sadistic. It did not take much for them to take off their belts, and beat the women. They just treated the women like slaves. They were made to dig their vegetables fields and they were made to clean their latrines and carry water for them. There was no privacy. You had to get dressed and undressed in public, you had showers in public, you went to the toilet in public. If you did not do what they wanted you to do they belted you, and the children had to watch.If you did not bow deep enough for them, you received a terrible beating and they made you do it over and over and over again, while you were standing in the burning sun,until you collapsed. 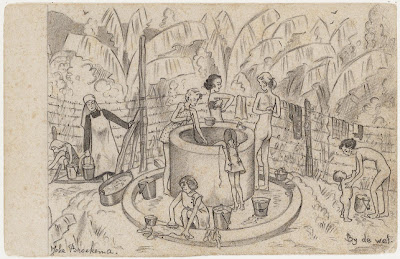 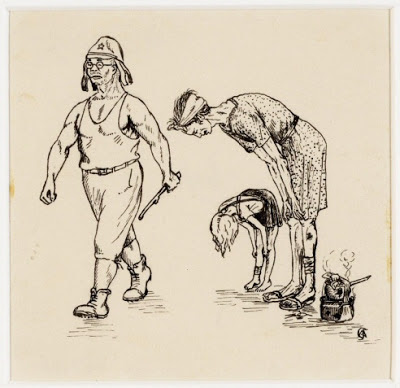 The women had to walk the night watch. Most of them were scared to do this. You never knew what kind of "Jap" was waiting in the dark,( that's what I heard my mother talk about to her sister)You felt so alone. You always tried to be close to another woman, when you had the night watch.If something had not pleased one of the "Japs" he called you to the church the next day. The church was not used as a church anymore. The Japanese had put up their office there and all kinds of things happened there.My mother often wondered why GOD did not strike them with lightning from a thunderstorm. Surely if their was one,""HE"' would have done that, she always told me. Why were they able to do these horrible things? My aunt Eke had to come to church ones, because she had refused to bow. She said she did not see the "Jap". She got a terrible beating, and was black and blue.My aunt was in the same camp as my mother. Her husband was a Marine, and was on the 016 a submarine. Their submarine had run on a mine, and all people on board had died, except one. This had happened just after the bombing of Pearl Harbor on December 14,1941.Their submarine had just torpedoed four Japanese ships and were on their way home to Soerabaja when the ship run on a mine.It was December 14 1941.One man survived and swam for 38 hours to tell the story.his name was C.Wolf. My uncles name was Tobias van Driel. My aunt received this terrible just after X-Mas.
In this camp were lots of people from Soerabaja. Some were original from Amsterdam and Rotterdam. It was nice for them that they had each other.

will continue:
Posted by Thea at 6:07 PM