While my mother and I were in the Java Care Center in Bandoeng she received a letter from  Queen Wilhelmina.
It is written in Dutch, 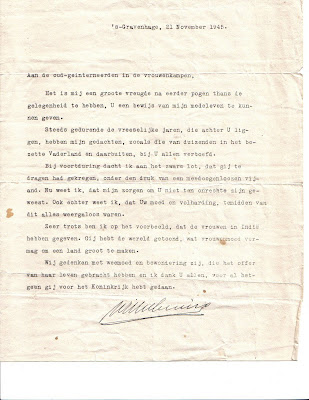 To the old-interned in Japanese Women Camp,

It is with great pleasure, after numerous tries, to have the ability to let you know that I have always thought about you.

All the time during these terrible years, which are now behind us, my thoughts, as well as those of thousands in occupied Holland and outside of here, always were thinking of you.

Every time my thoughts were with them who had to carry this heavy load. Occupied by these ruthless enemies. I know now, that my worries about you all were not injustice at all. Also I know that your courage and persevering in the midst of all this were unparalleled.

I am extremely proud for the example the women in Indonesia were for us. You have showed at the world how courageous you were and showed the world how big and proud you make your Country.

We commemorate with great sadness and admiration, those who offered their lives.

I thank you all for what you have done for our Kingdom.


When my mother received this letter, she did not know , that her husband had not survived. She was checking all the lists which came in from the Red Cross.
Soon after this letter she received word that he had died in that terrible place, on the Burma Railroad track.
How sad that must have been for her, she had just barely made it herself. She had been so sick, they told her  that it was a miracle she had survived..
When she was in the Java Care Centre in Bandoeng she received a letter from a friend from my father, who was with him for three months, in Rintin in Thailand.He said in the letter that he was there with my father and the other Dutch from the Cavalry. He  also told my mother that he had a few possessions from my father, which he had promised Reverend J.C. Hamel, if he would survive he would make sure that my mother would get these. It was my fathers wedding ring, which he had hidden all the time and some photographs who hardly were recognizable, and my fathers wallet. 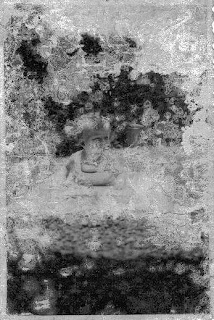 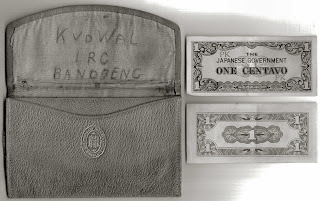 It's truly unbelievable that I now hold his wallet in my hands, after so many years.The wallet still had Japanese bills in it.If this wallet only could talk, it probably has an unbelievable story to tell.

Thanks Reverend Hamel, for being there for my father.

Reverend Hamel,
Thank you so much for making sure that my mother got back the wedding ring, and the other few possessions. Thanks to Mr. E.Veenstra, who had promised you to hand these in person to my mother if he survived.
Reverend Hamel I have to let you know that Mr. E.Veenstra survived that hell in Burma.
I am the daughter on that picture(Thea with my mother) which is almost unrecognizable.And I am oh so sorry that I only now find out that you survived that place as well, and wrote a book.
My mother would never talk about that time; it must have been too painful. She never knew about the last resting place they gave my father Klaas van der Wal: in Kanchanaburi, and I always keep wondering,"How is that possible?" she would have been so happy.
Thank you again Reverend Hamel, and Mr. Veenstra. 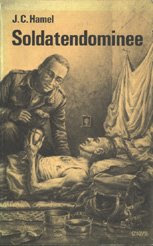 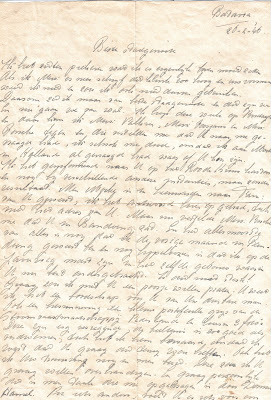 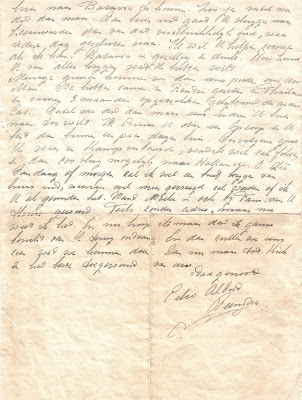 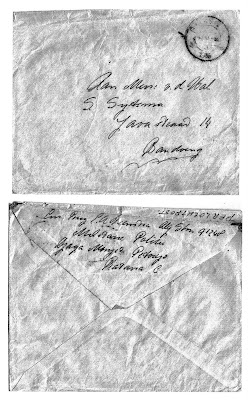 This letter was written to my mother on February 26 1946. Soon after that we left for Holland. In 1947 my mother received a condolence  letter from Queen Wilhelmina.


After your husband Klaas was taken prison by the Japanese , he passed away on September 18 1943, in Kui,Burma. Deeply affected by your loss, I would like to let You and the rest of your family know, that I  am
sending my hearty sympathy. May his offer to our Country and the whole of the Kingdom give us a better and happier future.

It is really sad that I had to find all these things after my mother and stepfather passed away.I found lots of things from my Stepfather too. He was in the Pacific in World War 11, on a ship  the Boschfontein, for 6 long years. I will write about that on my next blog and also about my mother and I arriving in Holland.
Posted by Thea at 6:01 AM