Reflections in the mirror of hairdresser Matayoshi

This is a story from my dear friend Elizabeth van Kampen.Elizabeth lives in The Netherlands, we meet once a year when we are visiting The Netherlands.Elizabeth with her mother and two sisters were in the same Japanese camp as my mother and I, in Banjoebiroe 10, during World War2, when Japan occupied the Dutch East Indies,(now called Indonesia). Elizabeth at the time was 18 years old and I was only 4 years old. 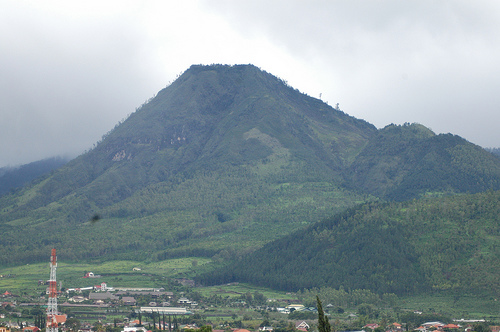 The story of Elizabeth:


In East-Java in the mountains lies a small town called Malang. A long time ago a hairdresser named Matayoshi owed a hairdresser salon in this town. He was a very good hairdresser and very modest. My father was always very satisfied when he stepped out the hair salon, and always shook hands with Mr. Matayoshi. They both had looked in the mirror while speaking to each other about daily life, etc.


Malang was also before World War 2 a beautiful town with a fantastic climate. I was privileged to live and grow up there for eight years.
My parents lived in the mountains where my father worked for a coffee and rubber plantation as a technical advisor and planter.I myself had to go school and was in boarding school in Malang. On Saturdays in the afternoon I took the bus to Dampit, where my father picked me up by car. This was the closest town to the plantation where my father worked. Monday morning I had to get up very early in the morning and went back by bus to Malang, where I had to attend classes again at seven thirty in the morning. Malang was a garrison town. In 1941 my father had to go for recapitulation exercise by the land-forces. After the Japanese attack of Pearl Harbor, the town of Malang had many city-guard security.My father was classified as a technical advisor over different plantations. 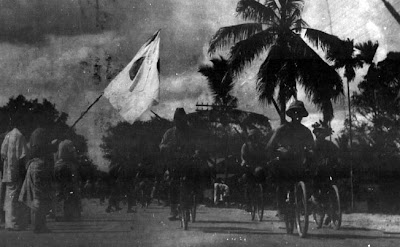 March 8, 1942 the Japanese shock-troops arrived into Malang on bicycles. From that day on the whole world around us changed.My sister and I saw the shock-troops arriving looking out the windows of our boarding school.Everybody was dead quiet, we saw something happening here, which was very hard to understand. The nuns continued  teaching us for another two weeks,after that the Japanese ordered all Dutch schools  to be closed. My father picked us all up, because my mother and my youngest sister were in Malang at the time because it was considered at the time to be safer in Malang.That's how we left, the five of us to the plantation high into the mountains.I have fond memories about my father and I walking kilometers under the rubber trees and along the coffee bushes and twice through a part of the jungle during that time.

That same year my  father had to hand over his camera, but his car as well. Our radio was put under seal.On December 25, 1942 Japanese military visited us at our home. The officer sat at the table with my father with all kinds of papers and asked hundreds of questions. They searched our whole house and after an hour they finally left.

My fathers task was to train the Indonesians, so when he had to leave they could continue the business. In February 1943 my father was picked up and was taken to the "Marinecamp" in Malang. April 16, 1943 it was my birthday and I was sixteen years old. My mother and I drove by dogcart (a small carriage pulled by horse) to Dampit. From Dampit we took the train to Malang.

Because I was sixteen years old now, the Japanese considered me an adult, and I was not allowed to go inside and had to stay outside in front of the gateway. My father had to stand one meter away from the gate inside the compound and I had to stay one meter away from the gate on the outside.At the gate stood a Heiho (Indonesian soldier from the Japanese army) he told us that we only were allowed to speak Malay and only for 10 minutes. I was so delighted to see my father again. I noticed that it was very difficult for him not to fling his arms around me and kiss and hug me. I pretended that it did not matter and talked happily about what was going on at the plantation.
This was the last time in my life I ever saw and spoke to my father. Luckily at that time I was not aware of it.

It was June 1943 when my mother,my sisters and I had to go to Malang and were interned in a women camp.We were treated not that badly in this camp, and now and then we were able to buy something extra to eat......if you still had a little money. In November my mother received news that my father was taken to Lowok Waroe Kempetai Prison (Kempetai are like the Nazis police). Word was that he had hidden weapons. It was a terrible blow for us.

It was February 1944 when my mother was told that she and her children had to be transferred to Mid-Java. Women and children were loaded into trucks and taken to the train station of Malang. Arriving at the train station the Japanese loaded us in box carts without food or anything to drink. We had barely any air to breath and no toilet.The train ride was horrible. Our new "home" was the prison of Banjoe Biroe where the four of us had a terrible time during the rest of the war. Not until November 1945 we were freed and were taken to Semarang. (Elizabeth and I spoke about this;  my mother and I must have been in the same convoy as them, loaded onto trucks with mattresses around us, so we would be protected from snipers) At the end of December 1945 we went by ship,' the Princess Beatrix' to Sri Lanka were we waited five months before we boarded a ship to take us to The Netherlands.

At the end of January 1946 my mother got the terrible news from the Red Cross out of Batavia that my father had passed away in the Kempetai prison in Malang. It was like the whole world caved in. Never in my life did I ever experience such dreadful news as the death of my father.

The rest of our lives ( my mother, my sisters and I) struggled to make a new life for ourselves.We had disappointment after disappointment. I myself decided to travel the world, and that was my salvation. Very slowly I climbed out of all my misery. I started to listen to other peoples problems and learned a lot.

Through the internet and being not afraid of it ,at my age, I got to know many e-mail friends, friends and acquaintances all over the world. I have learned a lot.

When I was vacationing in Indonesia,it was October 2, 1966, I was allowed together with a friend of mine to visit the Kempetai prison, where my father had been a prisoner for one and a half year, and where he died. My father has no grave, cause of death is not known. To see the prison and the cells where he had died..... was sort of a symbolic flower wreath for me.

I have seen the cells, where they told me the lights were on day and night. My father survived this ordeal for one and a half year, he must have fought to try to stay alive, he must have tried so hard, hoping to see his family again.Regularly the prisoners were interrogated and often tortured.
The interpreter of the Kempetai in Malang in Mid-Java was colonel Matayoshi.

Yes indeed, my fathers Japanese hairdresser from Malang..... a long time ago. What went through the interpreters head, colonel Matayoshi, while they interrogated my father, and he looked in my fathers friendly blue eyes?
Was the hairdresser Matayoshi thinking about the time, when he was cutting my fathers hair,talking and laughing at each other while looking into each others eyes in  the mirror in his hair salon in Malang?

I love you Elizabeth, you are a very brave woman.