86 year old women got back her photo album. 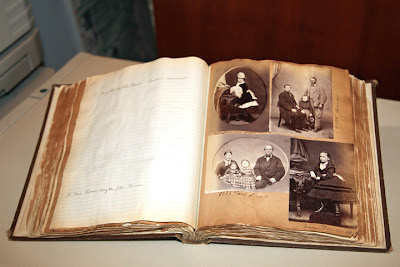 Today I read in a Indonesian News letter which I receive once a month that from 335 photo albums which were found in Indonesia, years after World War 2,  one 86 year old claimed back her photo album after a cousin saw her name in a story over a project written in the Volkskrant (Volks newspaper) in The Netherlands. These albums were laying for years in the depot of the Tropical Museum in Amsterdam. The museum had set up a fund for the project to try to find the owners of these photo albums.It only took three months to get together the money needed for this project, which is amazing.
My mother and her sister had lost all their photo albums during the occupancy of the Japanese in the Dutch Indies.Sadly no photo album from my mother or her sister were amongst them.
It is so nice to read that at least so far one owner, who is still alive recognized one picture which was published from her photo album.Seventy years ago this 86 year old had seen her album for the last time.She lives in South Africa now and she recognized her first album from her youth. Her daughter spoke for her and said: "How wonderful to see after all these years these pictures from my mother and to see photographs of the rest of the family, which we had never seen. I am so excited and so happy for my mother that her first photo album after all these years is back in our possession".
Next year the rest of the 335 photo albums will be posted on the internet. People who will visit this website can look through these albums and see if they recognize any of these photographs. The Museum hopes that through this website they will find more owners of these albums.

I am still excited about it, because you never know if there will be a photo album show up from my mother or her sister or for that matter maybe a album from one of their friends.
I will keep you posted, when the website is up.