After a good night sleep, the three of them bathed in the clear brooklet and rinsed their clothes.The Pimpel and the Tall guy took out their fish nets and set themselves down on a bank of a small river. The Pimpel who had not slept that night soon fell asleep.The small river was loaded with fish, and it promised to be a good meal. In the meantime Jan would check out the power station; a pistol and two hand grenades were the only ballast he took with him on his search on this difficult terrain. 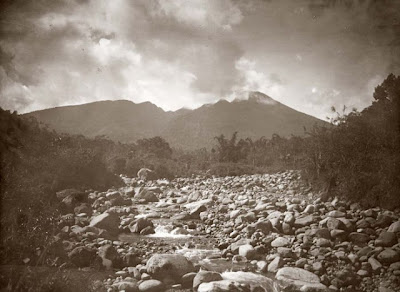 When he reached the top from a nearby hill, he could see in the distance the power station, although very vaguely.He walked through a ravine and climbed another hill top. The power station was hidden behind a row of trees, but the above cables Jan could see very clearly. Again he had to go down into a deep ravine; when he had reached the top from this ravine he could see below a few humble dwellings of a native village. 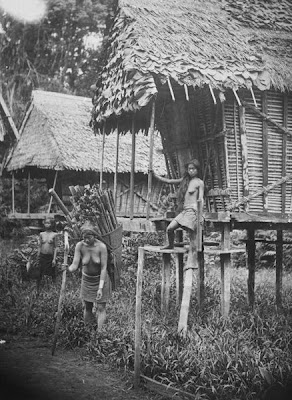 Jan did not wanted to be seen by the natives, even if he walked around the village he still had a chance that one of them would notice him. He was not going to take that risk, and choose to take a different route. At first he made a mistake, and took a wrong turn in the ravine. Finally he reached a spot where he could clearly see the whole installation of the power station.To be able to see the buildings and find out more of the situation of the guards ,Jan had to go at least another kilometer to get closer.For fear to walk into a patrol of Japanese soldiers, he slithered like a snake through the brush.Sometimes he stopped, to see if he saw any movement. Finally he reached one of the first buildings; the thick brush gave him enough cover. He could see the buildings very clearly now, and could not discover any sign of life.
Suddenly he noticed above the enclosure of sand bags the head of a Japanese, spying to all sides. Jan laid down flat on the ground and kept making notes in his mind.Heavy barbwire was placed around the building and the windows from the first floor were all barricaded with wood and sand bags.There was no way they could raid the building through the windows.In his mind he kept making notes, crawling along in a half circle, he went around the building.On this side of the building he saw Japanese uniforms hanging on a wash line; the guards existed of Japanese soldiers and Hei-Ho-soldiers, native young boys, trained by the Japanese and wearing their uniforms.This was valuable information because you could not make game with Japanese soldiers, while the Hei-Ho's had proven to be very bad soldiers,wavering of every threat of danger.He stayed where he was, flat on the ground, hoping to see if there were more guards in his field of vision.While waiting he took mental notice of all details of the energy building.The main building was large and build as a square. The part below was build from basalt stone. Here and there he noticed a small window.The large transformers were located around this building, from which the railroad track from Batavia and Buitenzorg was getting energy.In the building itself he noticed the large black and white of the switch-boards including the important precision-instruments. The large insulators were gleaming in the sun and from where Jan was laying on the ground , he was able to read the names in large black letters from the transformers: Bogor 1, Bogor II, Bogor 111, Depok, Kedoeng Badak etc.He now knew in which direction the cables were running. Every where on these grounds, tall masts with high voltage cables were pointing in every direction.The energy station was running on large water works.From huge pipes water plunged with a thundering sound into the turbines, which makes the generators move.Jan studied this whole process and again made mental notes.Suddenly he heard a different sound a rhythm sound like military marching.Around the corner of the building appeared a group of soldiers, in rows of two. They stopped right in Jan's view, as if they liked to make it easy for him. He counted twelve men; when he looked closer he noticed that they were all natives; Hei-Ho- soldiers.It pleased him and at the same time he was very surprised. One man stepped forwards from the group, he looked like a Japanese, but a tall, and masculine build man, very unusual for a Japanese.He seemed to be the commander, and shrieked and shouted at the group. The group of Hei-Ho-soldiers looked very nervous.Suddenly from the roofs sounded commando's. Jan looked up and saw two soldiers, who presented their riffles and it looked like they were relieved from their post.Jan was not able to make out their nationality.So far he had counted fifteen military soldiers, of which at least one was Japanese.The soldiers marched into a small wooden shack, which stood against the side of the main building.This was probably their shelter; they stripped themselves from their uniforms, their carbines and klewangs(swords), walked to some large barrels filled with water and started to wash themselves while laughing and talking loud. 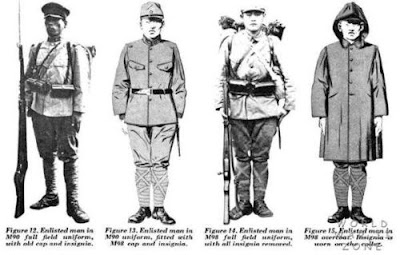 The commander had entered the main building.Jan noticed some natives dressed in their native clothes, who probably were the civilian employees, who belonged to the power station.These men had no weapons. Now Jan had to find out of the power station had telephone contact with the outside world.He searched for telephone wires but did not spotted any of them.Still he thought it strange that such an important installation was without a telephone connection.This was the only thing he was not able to figure out. But he knew that reinforcement troops had to come from at least 20 kilometers far, over very bad passable roads.If they got themselves into trouble they would have time enough to escape.This he took all in consideration. When the Hei-Ho's had disappeared, Jan quickly sneaked away in the direction of the ravine and returned to his two friends. The two welcomed him with relief; they had waited a long time and their joy to see their leader again in one piece was overwhelming. Around their bivouac it smelled like delicious fried fish. 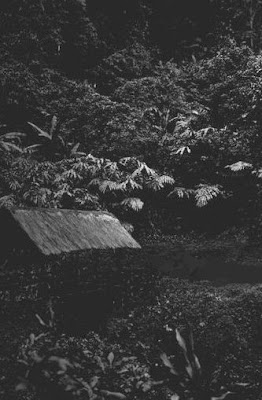 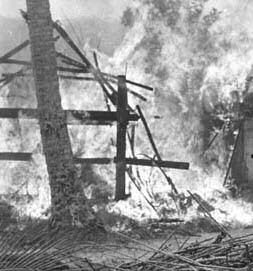 The oil is streaming out and catches fire, the whole environs are lighted up.The heat from the flames melts the conducting-wires.Lights have gone out everywhere.The prisoners panic, but the Pimpel has a couple of flashlights and keeps them all in check.They find more weapons and ammo and a huge amount of money. They have a problem how to carry it all. Jan asked the natives which ones are willing to join the Dutch patrol and promised to pay them well.Two men immediately put up their hands, and they each getting a large bag to carry. In the meantime the others are tied up to heavy posts.They don't like to do this but they can't take the risk that they will pursue them.It will take hours before the prisoners will be able to free themselves.The next step is to make sure that the weapons they have to leave behind can not be used again.The bolts are removed from the riffles and these will disappear into the effervescent foam of the roaring river.The ammo is piled up and a hand grenade brings it to a thundering explosion.The dead Japanese is buried by the two natives who are hired by the Dutch men.After a short inspection, the group leaves . In quick tempo they return to their bivouac, which they take down with the help of the two natives.They leave the same night and march deeper into the mountains; they have a map and a compass. In the morning they stop at a small place between high bushes, and set up a new bivouac. Jan will be the first one to stand guard. Soon the other four are fast asleep, while Jan keeps an eye on everything what moves, and listen to every strange sound, coming from the jungle.

Will continue:
next; On their way to Wijnkoopsbaai. A tiger close to their bivak. A very dangerous meeting. An attack on a Japanese guard.
Posted by Thea at 9:38 AM