The Life of Johanna Maria Kromhout, Ruud's mother, as an Actress. 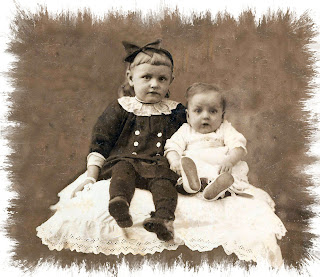 Ruuds Mom, Johanna Maria Kromhout and her baby sister Trijntje Barbara Kromhout,her sister was born March 4,1917 and died September 5, 1918. she was only one and half years old. 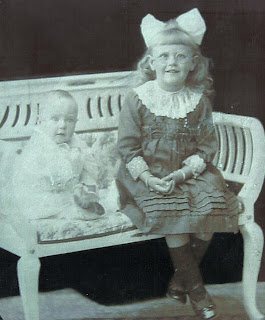 On the right is Ruuds mother Johanna Kromhout, with her sister Hendrika Kromhout, who was born in 1919. One year after Trijntje died. 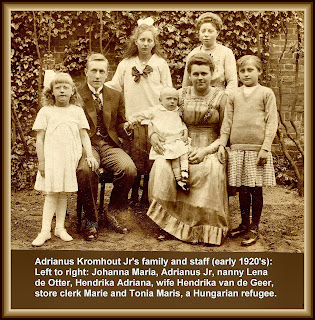 Johanna Maria Kromhout was born on April 10, 1915. Oldest daughter of Adrianus Kromhout and Hendrika de Geer.She had two sisters Trijntje Barbara and Hendrika Kromhout.Trijntje Barbara died when she was one and half years old.
Their parents owned a paint-hardware-store they also sold all kinds of candies. The store was located in the middle of Zandvoort, on the corner of the Haltestraat and Kanaalweg.Today it is a Pizza place and next door is a hairdresser salon.The hairdresser Salon is owned by a daughter of Hendrika, the sister of Ruuds mother Johanna.The family continues to be entrepreneurs. 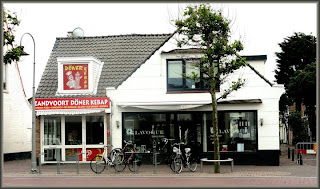 The store on the left used to be the store from Ruuds Opa, Adrianus Kromhout. The store on the right is now a hair salon owned by one of the daughters of Ruuds mothers sister. 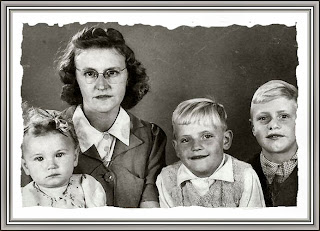 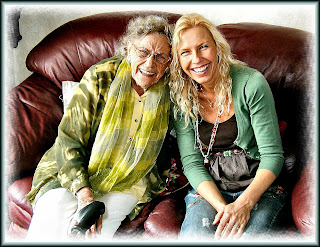 Oma(Johanna Bisenberger-Kromhout) with her oldest granddaughter our daughter Monique in 2006. I don't think I have ever seen my mother in law without a smile. 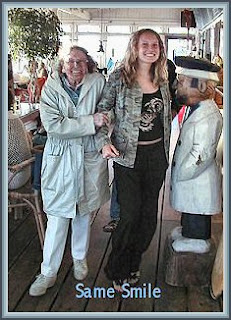 "Jopie" that's how every body called her,loved to act.Acting was in her blood. She lived it,she breath it, she eat it.'She should have been a Movie Star'.
When I started dating her son Ruud, I always thought it was strange, when I heard her talking around the house. Whatever she was doing she was actually trying to remember her part in an upcoming performance, and was literally acting while doing her ironing or cooking. It was not easy with three children. At one point in her life she had been asked to join the professional theater.But her children came first, and she had to decline much to her regret. Acting professional would have taken a lot of her time and with three children it seemed impossible for her. But she continued to act, and had numerous parts on stage as an amateur.I loved to listen to stories she was telling, because she could never sit down while she was telling the story, she acted the story. It was hilarious, whenever she told a story. 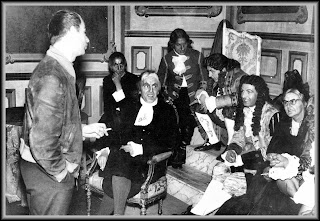 Last instructions from Henk van Ulsen, a great professional actor, before they went on stage. Ruuds Mom on the far right. 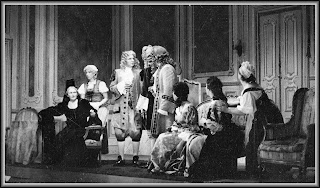 On stage,Ruuds Mom on the left, she had the leading part, in "Tartuf" written by MOLIERE. 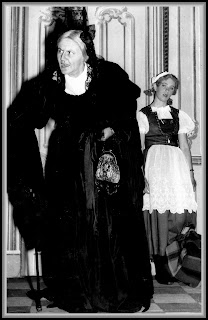 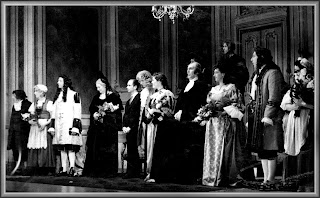 A standing ovation, at the end of the show.Fourth from the left Johanna (Ruuds Mom) next to her Henk van Ulsen, who was the Director of the play. 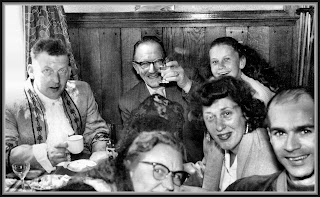 A toast after the good performence with Jopies father Opa Kromhout with Jopies daughter Carla and Henk van Ulsen on the far right.Leen Paap on the left and second from the right Carla van Delen-van Dijk a very good friend of Ruuds mother Jopie. 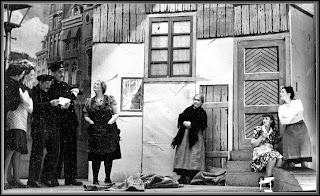 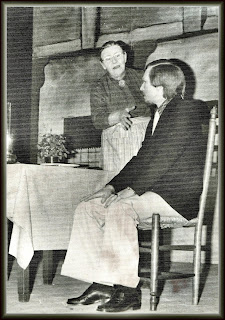 In this picture is Ruuds Mom with her nephew Henk Spierieus son of her sister Hendrika.He was a fine actor, unfortunately he passed away in the year 1990, at the age of forty nine. 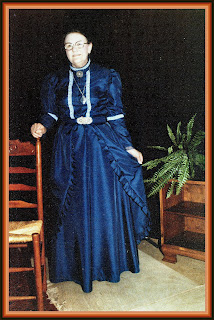 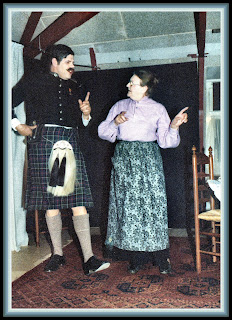 There are so many pictures, too many to put them all on this blog. But these are the most memorable, and to our kids we have to let you know that your Oma was an unbelievable actress. 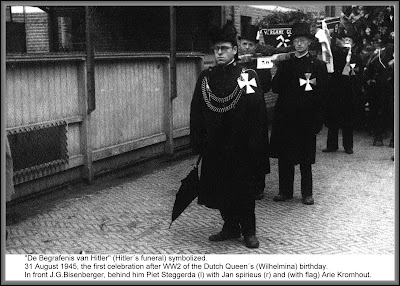 Ruuds father Joop Bisenberger kept himself very busy in the theater business.He was the President of the 'N A T U" (the Netherlands Amateur Theater Union).After World War II they symbolized a funeral of Adolf Hitler. Ruuds father on the foreground. On the coffin it says "Lost Glory".
At the end of 1950 he directed quite a few plays.Ruuds father has been a very busy man his whole life.The children never got to know him, because he was always on the run. He had his office job with the city, he was a correspondent part time for Reuter and ANP, and for a couple of newspapers, that was really his passion.A couple of nights a week he was a director from 'Op Hoop van Zegen' the theatrical company, but also went twice a week to another city where he directed another play with another theatrical company. And as I mentioned in my other blog he was president of the Life guard association and a member of the board of the K N B R D,(Royal Dutch Life Saving Association) and on Sundays he was a referee for the soccer team. I have no idea how he could do it all.But he did.No wonder that Ruuds father and mother got divorced.Not once but twice. Yes only in this family there was a marriage with the same women twice. He divorced Ruuds mother and then married her again and then divorced her again.So Ruuds sister Carla is from the second marriage, but from the same father. 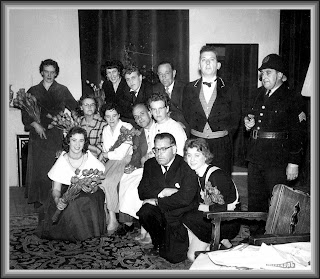 Ruuds father in the foreground,at the end of a performance he directed.His mother second from the left. 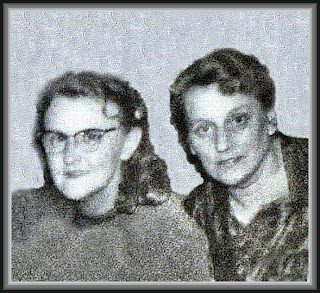 Jopie(Johanna) and her sister Riek (Hendrika)

After 45 years on stage as an amateur she had to say goodbye! On January 9 and 10, 1982 she performed for the last time and was playing the part as 'Mrs.Puffin',in the play "Mrs.Puffin". You wonder why she had to quit the theater, which she loved so much.It was not easy to say goodbye, but it was a compelled necessity.However she was hard-headed enough to realize that because of her rheumatism it was getting difficult for her to move around on stage.So this role would be her last, and the theater was sold out to see her last performance and it was a hit. She got a standing ovation, and her tears were flowing.
In her goodbye speech she was telling the audience that it had not been an easy decision.After all I am not getting younger.She talked about...'her'...'association'.. when the Alderman A.J. van der Moolen in the year 1937 suggested to set up an amateur theater association.
Little did she know, at that time,that she would be still alive today and we hope to celebrate her ninety seventh birthday on April 10 this year.This is last year May 2011, when Ruud and I were in the Netherlands.Reminiscing about the good all days. 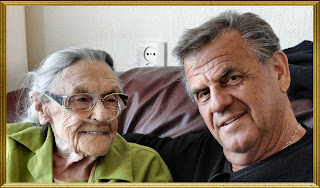 Johanna Maria Bisenberger-Kromhout with her son Ruud May, 2011.

She was one of the first of a small group,who joined and was present at the first meeting in the building 'Ons Gebouw' (Our Building) in the Brugstraat in Zandvoort, the Netherlands. At that particular night a lot was accomplished.That night they discussed their first stage performing and it was going to be the play 'Levensdraden' (Life Lines) from A.M. de Jong.Johanna was chosen the part of a hooker. The stage-director discovered her sitting quietly in a corner and pointed at her.The performance was a great success and was held in the big theater of 'Monopole' on the first of May 1937.Her best memories are from that time. 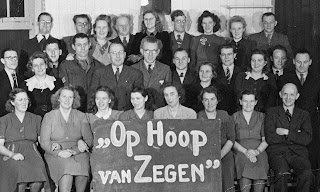 On the back row 2e on the left her husband to be; Joop Bisenberger, and Johanna Kromhout in the middle on the back row. On the next row her brother in law to be Jan Spierieus with next to him Ruuds mothers sister Hendrika Kromhout.
The association was a very socialistic organisation.When a Catholic person wanted to join they were accepted on these conditions that they would not have objections against theatrical performances like the performance of the stage-play 'Levens Draden' in which a hooker was portrayed.They had no objections. In 1937 that was a victory really, because Zandvoort had a lot of Catholics in those years but it was a surprise that Zandvoort knew already at that time a lot of Red-Roman Catholicism.
Very good memories she has from her study weeks which she attended for 25 years. At these study-weeks she got lessons from the best in the show business. Her teachers were Ton Lutz, Gelijn Moulier, Peter Brandsma and Teuntje Arend Hauer well known professional actors. 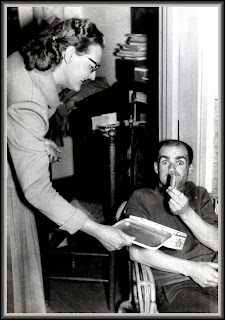 At home ,Ruuds Mom with Henk van Ulsen, a welknown Dutch actor the Director of the play 'Tartuf' which they performed in the wellknown theater "The Schouwburg" (Theater) in Haarlem.

Jopie reached a high level in the amateur stage performing. Looking back she comes to the conclusion that she has been very lucky that she has been able to perform such high standard parts as 'Kniertje' in the play 'Op Hoop van Zegen' and as Annie Wiesner in 'Ik zeg toch zeker niks' (I say nothing) and "De Meid" (The Maid) from Herman Heyermans and many others. Her favorite part has been ' De medailles van een oude vrouw' (The medals from an old women)in 1961. At one point her two boys were playing along side her in one of the plays.But Ruud did not lasted long, he had to go in the Army and being on stage was not for him.He was not serious enough, once he had to be under the stage and had to come up from there as a soldier. He had to sit there for a long time, and got so bored. He saw his mother up on the stage through some spaces in the boards so he found a long stick and started poking her while she was acting, boy was she mad. But it was so funny, because the audience could see the stick poking out. His father nearly had a fit. So that was the end of Ruud's acting career. 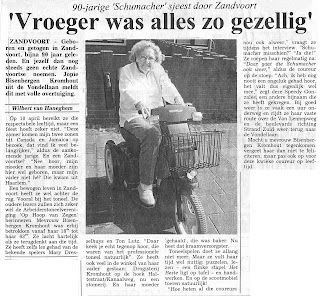 This interview was when she reached the age of 90 years. In Zandvoort she was well known. They named her after the race car driver 'Schumacher'. Every day rain or shine she would get in her electric car and do her rounds. She knew exactly how far she good go on one full loaded battery.One time the battery was not fully loaded and she was stranded in the middle of the dunes. Luckily some bikers helped her.When she reached the age of 93 she got sick and had to go in an old age home, where she still is and hopes to reach her 97th birthday on April 10 this year. 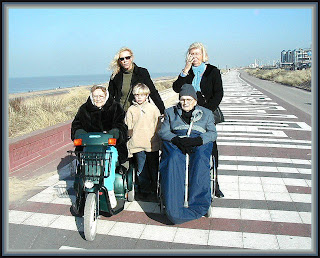 Going for a walk along the beautiful boulevard in Zandvoort. It is 2003. On the left Ruud's Mom (Jopie) and Thea's father(Leen) Monique with her son Sam and me (Thea). It was a very sunny day in February. My mother had just passed away on Valentines day, February 14,2003. 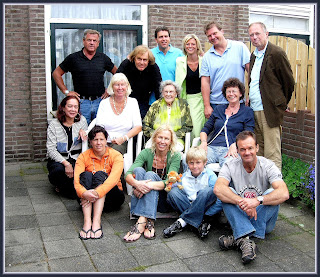 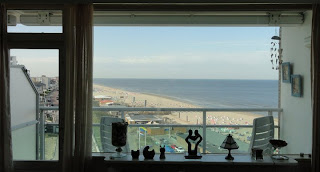 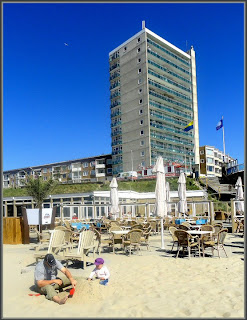 This is the apartment we rent every year. Our son Dan and his daughter Madelaine on the beach last year.May 2011.

Years have gone
Where only memory stays
History of life with many rays
Of ultimate joy and its fears
Ending with joy or tears.
The strength of humanity in it's need
A crossroad, a new life to lead.
Hope and strength play it's part
Faith always at the start
Like a light it guide its way
Was where our future lay. 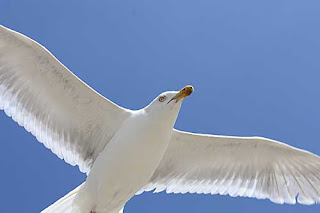