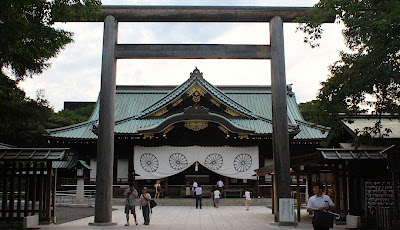 In Japan(where one of my golf-friends son is a teacher from Canada), stands the highly controversial Yusukuni-Jinja museum. The museum commemorates all the Japanese soldiers who died during all the wars.
The largest part of these victims fell across Asia as Japan was colonizing "their" continent with the slogan theme "Asian for the Asians".
The sad part is that the museum shows absolutely no remorse for the war crimes committed. The only remorse there is to be found, is that they ended up surrendering to the United States of America in 1945.

In the museum they discuss the history of the Nanjing Massacre, or as they (Japan) calls it the "Incident of Nanking".

It tells one of the following: "General Matsui told the soldiers that they were to maintain strict military disciplines and that anyone committing unlawful acts would be severely punished.
The defeated Chinese rushed to Xiaguam, and they were completely destroyed. The Chinese soldiers disguised in civilian clothes were severely prosecuted."
These words are portraying history in a total different aspect, they do not speak about the real facts.
The Japanese state "only a few thousand people were killed in the "Incident of Nanking". A few thousand????Are 300.000 thousand only a few???
The Japanese deceitful shape their past, by changing the facts. They are very good at that and have a good way of shaping their history they like it to be.The way it is written  is very believable. The Japanese captions and explanations are very dangerous. Any uneducated person about world war 2, believe the "facts" as the truth.
The children in Japanese schools are not educated to be critical of the role Japan played in the war. Their history is being told in a total different perspective.

That's why this subject is still a massive open wound to the people involved.
It is because Japan has never apologized for what happened.Over and over, they openly deny guilt and claim to have only done good things to their fellow Asians during their occupations.

When young people in Japan are being asked about those times, they simply state:"We do not talk about that anymore".
Nevertheless, it is still talked about at great lengths by the victims, children and grandchildren. Why has Japan never apologized? Well Japan has a number of political lack of apologetic behavior, there are a number of political explanations on this part of the Japanese.
They still show a begrudging attitude towards the rest of Asian.
Meanwhile time has gone on. China is becoming richer and subsequently in international political power. Japan has come to a standstill. The time has come for Japan to apologize.
Nevertheless, Japan is showing absolutely no signs of planning to any kind of apology, which might become one of the two of their biggest error in their history.The first biggest error was the attack on Pearl Harbor, and involve the US in world war 2.

Every second Tuesday of the month, the Dutch in the Netherlands are demonstrating in front of the Japanese Embassy in The Hague. The curtains close, as soon as they arrive. A petition is handed over and these are still being ignored.We are asking for an apology and asking Japan to show some remorse, but they still deny all of it.

Time is running out for the "girls" and young women, who were made to be socalled "Comfort Women", in the concentration camps in The Dutch East Indies (Now called Indonesia) and for the women, children and men who suffered at the hands of these so called Nippon soldiers.


My mother Sietske van der Wal- Sijtsma and her sister Eke van Driel-Sijtsma were one of the young women being abused by these Japanese soldiers in Moentilan,Java. Sadly they both passed away. Covered in shame my mom and her sister had to live the rest of their lives with what happened to them in these Japanese concentration camps in the Dutch East Indies. Talking about it in those days was taboo. Most of the time the women were being blamed that it was their fault, or they were made out to be lying.
Up to this day, no apology has been made to them.
Time is running out to make reparation to the internees that are left. Never has the Japanese government made an apology or given any compensation for the financial loss that those internees suffered. But the Canadian government has apologized and given compensation to the Canadian Japanese in British Columbia, who were considered to be a security-risk for the nation, and were displaced from their farms and properties and taken inland to concentration camps until the end of the war and so did the Us.
Why is it that Japan gets away with this?. Is it not time that the whole world stand up for us. Germany paid for their war crimes and apologized.
It would have been so wonderful for my mother and her sister to hear an apology from Japan for the atrocities the Japanese soldiers inflicted on them during world war 2. They took their nightmares into their graves, and the hardest part for them was that Japan always denied all of it.They passed away without knowing that women children and men have come forward and fighting for what had been done to them.Sadly my mom and her sister never lived to see this.Time had run out for them.

Some photo's they had send home before the war, are the only ones they had. Everything else they had to leave behind, when they were  taken out of their houses and send to the concentration camps.They were allowed one suitcase per person and a mattress. After three and a halve year in these prison camps not much was left of these clothes.At the time I was only a baby, so I wore the clothes of other children, who had outgrown them. Shoes I never possessed, up to the age of 5 years old, when we were finally freed.

Some pictures from Bandoeng, where I was born.


War brings misery and lots of loss of lives.Their lives changed drastically, after the surprise Japanese raid on the US naval Base at Pearl Harbor. December 7, 1941.

I lived awhile on Java Isle
That sun baked beautiful land
Where bomb and shell made life a hell
with death on every hand;

I lived my first years in a camp
with no food and water to be on hand
I heard women scream in their dreams
and watched mothers going mad.

Enduring degradation as long as they can
forced labor camps when they could hardly stand
Brave women lost faith and desire
the legacy of love from behind barbed wire.

Starvation, diseases, torture and pain,
Pressures of cruelty driving women insane
Prisoners of war is what the Japs claim
Prisoners of Hell is a better name.

In fond memory of my mother and her sister, one of so many heroes.They survived the horrors of these terrible Japanese prison camps, for the sake of their children.