Another monument went up this Saturday.September 29.2012

On Saturday September 29,2012 another monument dedicated to the memory of "Comfort Women" forced into sexual slavery during World War 11 was set up Saturday at the Veterans Memorial at Eisenhouwer Park in Westbury-New York. 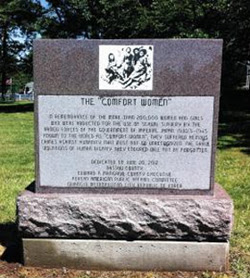 The red Granite Monument symbolizes the hardship and blood of the 'Comfort Women'.Nassau County, which manages the memorial park, will maintain the monument.
This is the second memorial of its kind in the U.S. following one in Palisades Park.
The construction was carried out in secret for fear of resistance from the Japanese.

The Japanese Consulate-General in New York has called for the removal of the New Jersey.
This is what I read today:

Pundits including some Japanese polititions warn that former prime minister Shinzo Abe's denial of Tokyo's responsibility for the sexual enslavement of Asian and other non Asian women during World War 11 is a grave effort for the international community.

In 2008, the UN conducted a study on the former sex slaves in conjunction with member nations. In October the same year, the UN's Civil and Political rights committee adopted a report expressing "concern that the State party (Japan) has still not accepted its responsibility for the 'Comfort Women' system during WW11."
'Comfort Women' is euphemisn Japan uses to refer to the sex slaves.
Japan"should accept legal responsibility and apologize unreservedly for the 'Comfort Women' system in a way that is acceptable to the majority of victims and restores their dignity, prosecute perpetrators who are still alive; take immediate and effective legislative and administrative measures to adequately compensate all survivors as a matter of right," the report said.

It is also recommended that Tokyo" educate students and the general public about the issue, and to refute and sanction any attempts to defame victims or to deny events".

In 2009 a UN committee on the right of women also called on Japan to compensate the victims.

In 2007 the U.S. House of Representatives passed a resolution on the former sex slaves,urging Japan to resolve the issue. It critized their mobilization as "forced military prostitution by the government of Japan, considered unprecedented in its cruelty and magnitude."

Cho Tae-Young, a spokesman for the Foreign Ministry here, said in a statement on Wednesday,"Relentless, some Japanese leaders and politicians have been ignoring both the suffering of the victims and the solemn decisions of the international community. Japan must realize that there is no future for a country that turns a blind eye to history."

Hillary Clinton says 'Comfort Women'. is incorrect Term. They should be referred to as "enforced sex slaves." 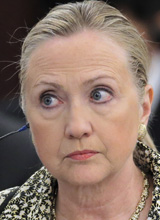 So far Washington has avoided getting involved in this painful history. Although Clinton
made the comments behind closed doors, they appear to reflect her view that the Japanese government must change the way it handles the issue.

Singer Kim Jong-hoon and Sungshin women's University Professor Seo Kyoung-duk, placed an ad in the New York Times on Tuesday calling on the Japanese government to apologize to women pressed into sexual slavery for Japanese soldiers during WW11.

Entitled "Do You Remember?." the ad features a photo of former German Chancellor Willy Brandt kneeling in front of the cenotaph of the Jewish ghetto in Warsaw during his 1970 visit to Poland. "We wanted to stress that Japan needs to learn from the courage Germany has shown," Seo said.

Kim, who paid for the ad, said the plight of the so-called "Comfort Women" involves a despicable violation of women's rights." He added," I wanted to let the whole world know that the Japanese government refuses to apologize despite turning some 200.000 women into sex slaves. 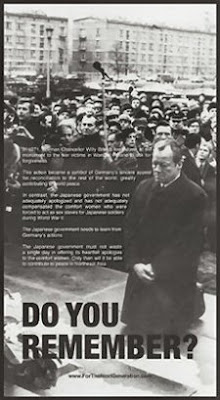 Japan when are you going defeat denial? You will see more and more monuments being set up to remember the innocent.We will keep reminding you again and again of the brutality of the Japanese military in World War 11.When our fathers and mothers are not with us anymore, we the children and grandchildren will continue to remind you of your past.Do not think it will go away. Each new generation confronts the past, that is what we teach them.