Just got back from a beautiful Holiday to France and Holland. I promised that I would continue writing about our years in Japanese camp , and our return back to Holland.


It was a very sad day. The year was 1946. We had survived not only the Japanese camps but also the Bersiap. When we were liberated we had to be protected by the Japs (of all people) we had to stay in the Prison Camps because outside the camps it was too dangerous. We were free, but what was the meaning of that word?? Our freedom was only from the Japanese tyrant's. Freedom to us was something very unreal. Here in Indonesia we were in the midst of a new War. Many Europeans were in this period not safe. We had to stay in the Prison Camps, and ironically, the Japanese our former tyrants had to protect us from the Indonesian resistance.(The extremists) We were guarded by Netherlands ambonese, who only had steel rods,taken from beds, knives, and a few stolen riffles. It was a life threatening situation in Camp. Dutch troops arrived from Holland to fight the extremists. The combat outside the camps was fierce. Shootings and bombings everyday. The extremists were hiding outside the camps in the little Indonesian villages.Life in Camp was a little improved, since we no longer were Prisoners of War of the Japanese and we had a little more to eat. But now we were in danger again.We hated the Japanese and now they were our protectors. We were out of control, we spit at them when we passed them. We did no longer have to bow for them, oh what a good feeling was that, is what my mother told me.The Japanese tried to be friendly and sometimes touched my hair, because I was so blond. My mother told them to keep their stinking yellow hands of my daughters hair. You yellow beast. They could not understand her anyways.They knew that there former tyrants had to protect them from the dangers, but my mother said she could not help herself she hated them so much.
Nobody in Holland had any idea that it was still so bad in Indonesia. One day the Japanese had fled , and the extremists entered the camp. They slaughtered every women and child. My mother only  told me once that she and I were hiding under a bamboo bed because the extremists were shooting at us.

My husband Ruud, me and my sister Sietske and my brother Leendert went to visit my mothers youngest sister Anneke in Kolhorn, when we were in Holland this year.My mother had told her sister that she and her sister were raped by these Japanese while in Moentilan in that horrible camp.She had promised never to talk about it.My mother and her sister felt such shame and dirty, and in those days you never talked about these things.
I was so shocked when I heard this. How come my mother never talked about this? Was this war trauma?? I am still trying to come to grips with this terrible knowledge.What an emotional day we had. I think we never cried so much. It was good for my aunt to get this off her chest.How sad for my mother and my aunt that they never were able to talk about this, they so desperately needed help.In Holland everybody was still so busy with them selves. Life continues and it is better to leave things behind and try to forget.But still what happened should never be forgotten. We have to make sure that our children never will never be in these situations, ever! It should never happen again! To live with hatred and resentment is so bad, specially for your health and your mind. All around in Holland, when we arrived from Indonesia,was talk about the German occupation. How they had suffered. They had no idea what their fellow countrymen had endured. How hard it was for them not being able to talk about what happened over there. Over there seemed like a long way from Holland. You were in Paradise, they said, compared to us.
The hatred for the Japanese was always there with my mother.She hated everything what had to do with Japan. She passed away in 2003, she was never able to forget and was not able to leave that period of her life behind her.She was never able to forget her first husband Klaas.Although she had a very good life with her second husband.How my mother has spared me from all of this. I always asked questions, she always told me that Indonesia was Paradise on earth, which was true, she never lied about that. But she never told me how Paradise in Indonesia was changed into Hell by the Japanese occupancy. 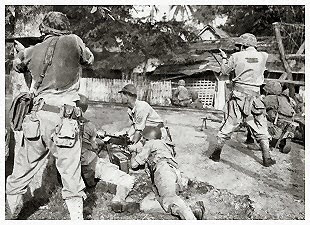 My mother and I were finally able to leave this hell in 1946, but the fighting still continued five more long years after World War 2 had ended. Many young men lost their lives. The UN Security Council demands release of the Republican government, and independence for Indonesia.
August 17 1950 Indonesia is fully independent.If only The Netherlands had agreed in the first place to give Indonesia their independence, this might not have happened.
300.000 Dutch, and 920000 Dutch Forces left Indonesia.Many had lost their lives. Why??

The soldiers were wondering: why had they been in this Hell!!!

I think Holland is still ashamed of these happenings, and has been trying to shovel this under the carpet.How come the Netherlands  never paid compensation for all the losses of their fellow countrymen? Their excuse was that The Dutch-Indies after their loss was bankrupt. Indonesia was a Dutch Colony for 300 years, it belonged to Holland and now all of a sudden we did not belong??A nice letter from the Queen Wilhelmina did not help the old-internees from Japanese Camps and all the young men who died.Shame on you! All other countries did. The Australians, the English, the Americans,what kind of excuse do you have Holland?

My husband Ruud and myself, my sister and Ruud's sister Carla, went to visit the Monuments in Arnhem in July 2010. Here some pictures. It was very emotional. 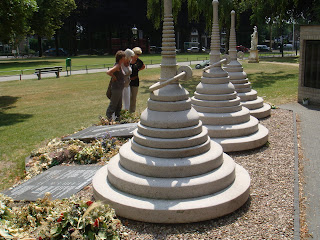 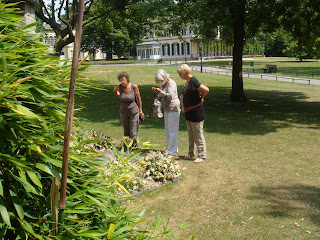 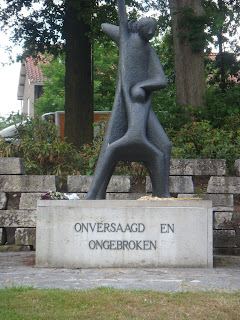 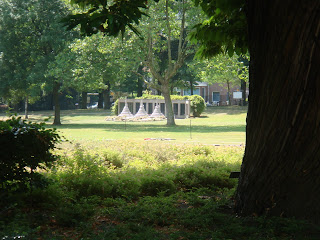 My father was in Rin Tin and in Kinsayok, He died in Kuye where he was buried by his comrades and after the war his remains were transferred to Kanchanaburi, where he is resting in Peace, with his other fallen comrades.


Next story will be about my mother and I returning to Holland .Mom your story had to be told.You never were able to do it, so I do it for you. I love you!!
It pains me that you never have seen these monuments. Maybe it would have given you some peace.
Posted by Thea at 6:11 PM