During a recent parliamentary session you mentioned that you are frustrated by lack of progress in the fate of Japanese"kidnapped" by North Korea. You said: No abduction victims have returned home, but I will maintain the policy of dialogue and pressure".

you must realize that the victims of the Imperial Army are in their turn extremely frustrated by the lack of any progress in the dialogue between the Foundation of Japanese Honorary Debts and your government's diplomatic representatives in The Hague.

1.    .You and your predecessors refuse to acknowledge the receipt of our 247 petitions over a period of 25 years, personally addressed to the Prime Minister of Japan. This impolite and rude attitude astonishes us as the Japanese are generally known for good manners and respect for elderly people. It demonstrate the lack of respect and moral responsibility of the government of Japan to the victims.
2.    Despite global objections you personally continue to glorify and pay respect to convicted war criminals.
3     You continue to question the validity of statements by your predecessor and according to media reports you intend to dilute these statements on behalf of Japan in a personal review.

The forthcoming 70th anniversary of the end of World War Two is the opportune moment to end our frustrations and to demonstrate that our dialogue is meaningful. The victims of the Imperial Army organized in the Foundation of Japanese Honorary Debts, demand respect and acknowledgement of the moral responsibility of Japan for the conduct of the Imperial Army during World War Two in the Dutch East Indies.

We look forward to a meaningful dialogue and reconciliation as a result of your address at the 70th anniversary of Japan's capitulation on 15th August 1945 and acknowledgement of this petition. 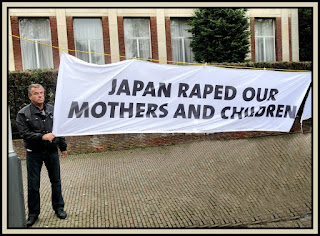 JAPAN MUST REMEMBER ITS PAST!

Our business with Japan is unfinished and will remain so until the Japanese government fully accepts it quilt and tells its people what was done in their name during World War Two.

We the surviving victims,who are now in their seventies and eighties, and were children then, will remind Japan about the horrible evil of the Japanese military occupation. As children we know the painfully feel of the past.
The traumatic experience of seeing your mother being beaten in front of your eyes, and not understanding why she was beaten, will stay with you forever, no matter how young you were at the time.I will never forget seeing women hanging on trees and the Japanese monsters telling us children to throw stones at them because they had to be punished. How can you as a young child understand these horrible things you saw daily.I remember trying to hide behind my mother's skirt, because I was scared to death for these little yellow men who did nothing but scream and were hitting my mother and my aunt.
I never forget that one day I was looking for my mother and I wandered towards the gate which divided the compound from the fields where the women had to work the vegetables patches from the Japanese.I knew that my mother and my aunt were there. I just wanted to be with my mom. I approached the guard and I dutifully bowed. Because by not bowing I knew that my mother would be severely beaten.We the children would asked our mother daily if we were bowing correct, terrified that we would not do it correctly and knowing that our mother's would get punished for not teaching us the correct way.The guard told me to sit down and wait for my Mom to come back from the field. "Which is your Mommy?" and I pointed at my Mom. The guard promptly headed out into the field and grabs my mother and hauls her through the gate.My Mom screamed at me that I had to go back to our living quarters immediately. When my mother finally returns she is black and blue and bleeding. My Mom told me that she fell and that's how she had hurt herself. I was told that I had to stay away from the gate, it was very important for me not to come looking for my Mom.

These are just a few things my cousins and I are remembering. We often wondered if they were indeed bad dreams we had for years. Our mothers told us over and over that they were bad dreams, because such things do not happen in real life. People don't do these nasty things to one another we were told over and over again. My cousins and I were often questioning each other why it was we were dreaming the same things.For many years after the war I was petrified to go on a train. With great difficulties my mother was able to get me to step into the train. I would shiver and the sound of the train would give me goose bumps. Clickety Clack, that's what I remembered from way back then.One day we had to get into these box cars and we were all crying, We hardly had any water and the heat was unbearable. All I remember is the sound of clickety clack on the tracks and being scared out of my mind.I still don't like to get on a train and try to avoid it.

Dear Mom,
I am a child no more, but unknowing carried the scars you wore.I found out, the more I learned the more I heal. One thing I have to say, I admire people who can forgive what these monsters had done.. I will never be able to forgive those who inflicted those horrible atrocities to you and your sister. That scar on my heart will never be mend.You and your sister experienced too much horror at their hands and I always wonder, if they ever felt sorrow. I hope that their years after the war were filled with nightmares like the nightmares you were plagued with for the remainder of your life.I hope when they look at their children, that they will think about what they had done to us little children.I hope when they have a daughter they will beg that their daughters never be raped the way they raped you and your sister in that filthy camp in Moentilan in a church of all places.I hope you and your sister rest in peace, with lots of love from me.
Thea

Those who survived remember and will never forget the sufferings at the hands of the Japanese military and their agents every day.Many children my age didn't survive this holocaust, which was forgotten and even ignored by our own government from The Netherlands.Many mothers and fathers died at the hands of these little men who called themselves soldiers of the Japanese military. What kind of soldiers are this who beat, starve and rape innocent girls, women and children.
Yesterday July 13th another former victim of sexual slavery and human trafficking, institutionalized by Japan's Imperial Army during WW2, passed away. Choi Geum-Seon we hope you found peace.

Forced labor and raped, when they could hardly stand
Enduring degradations as long as they can.

Brave women and men were lost as they passed through the fire
The legacy of love from behind barbed wire.