Mines in the sea, reminders of the past.


Reminders of World War 2, it will forever haunt us.Sixty eight years ago and bombs and sea-mines are still laying on the bottom of the North sea. A daily threat for fishermen. 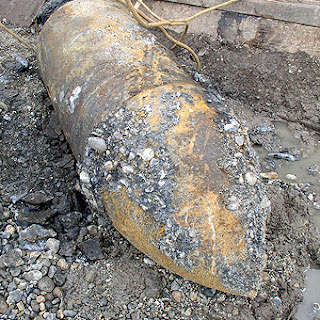 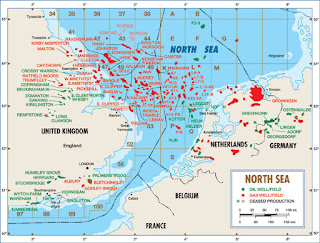 This story I read on a Dutch side and I thought it was very interesting to translate in English,specially because Ruud and I are spending every year a month in Zandvoort on the North Sea. Zandvoort the place where Ruud my husband was born and where both of us grew up. We spend many days on the beach and were both certified life guards.It intrigued me that as of today they still find these life bombs and mines.When we grew up in Zandvoort we often heard that these things were found, sometimes with devastated news.The Germans had build bunkers all along the coastline and in the dunes.World War 2 had disastrous consequences for beautiful Zandvoort. The Germans practically destroyed the old village when they occupied The Netherlands.Many days Ruud and I spend time patrolling the sea. The North Sea can be very treacherous.I would have never thought about life bombs still laying on the bottom of this sea bed.


An American aircraft bomb, from World War 2, gets tangled in the fishing nets of a fisherman's boat.It's April 6, 2005 the men are pulling in their catch of the day. The nets are pulled on board, and the 500-pound bomb explode. Three fishermen are instantly killed, one of them the son of the captain.

Sixty years it has been since the bomb was laying on the bed of the North Sea off the coast of The Netherlands. The incident caused a shock wave amongst the Dutch fishermen, who quite often had bombs hanging in their nets before. It was rare that the thing would explode, after being for that long on the bottom of the sea. The incident with the OD-1 meant the start of a large clean-up of the seabed.

Two years later: another bomb is found on the bottom of the sea, only 9 kilometers off the coast of  Zeeland. Just like the OD-1 an old American aircraft bomb and again a 500 pound bomb.
Sea lieutenant Olav Thesingh says:" there is at least another 10 years of work to clean up the reminders of World War 2". From the bridge of the minesweeper Hr. Ms. Schiedam, he watches how the explosion from thirteen meters deep send an enormous column of water in the air.The vibration is felt on the ship.

Haw many of these bombs are still laying on the sea bed, nobody knows.They estimate at least a couple of thousand. During World War 2 aircraft bombers were flying back and forth over the North Sea towards Germany. On their way home they would drop the bombs they had not been able to drop over German occupied Europe in the North Sea as superfluous ballast. 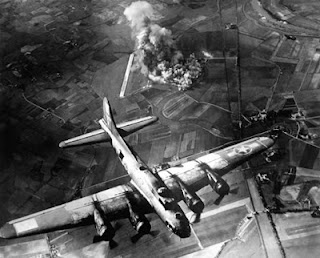 Since that time the bombs end up almost daily into the nets of the fishermen.These bombs are a huge threat for the fishing industry. "Even so these bombs are over sixty years old, they are bombs". says Thesingh. The fishermen used to throw these bombs back into the sea, if they had one in their nets. The official procedure was not done- the bomb was suppose to be taken right away to the harbor, where the bomb squad would  take care of the bomb. But this mend for the fishermen less days at sea, less catch and less pay.

The explosion at the fishing boat "Ouddorp-1" changed everything. From that day on 'April 2005' the clean up of the bombs from the bottom of the North sea has been a very important task for the now one hundred year old minesweeper company of the navy. The total bombs who are reported by the fishermen since the explosion on  the OD-1 has gone from fifty a year to almost fifty a month.

A couple of years ago we would laugh; the fishermen tell in the harbor of Scheveningen. Looking back we have been damn lucky. We call it fisherman's luck.Certainly when the weather is bad and the boat rolls in the high waves, a bomb in the net can go off easy.Since the incident not one single fisherman is careless anymore. You would be declared crazy if you would ignore what happened to the OD-1.

When a fisherman nowadays has a bomb or sea-mine in it's nets, the coast guard is informed about the location where they dropped the bomb or sea-mine over board.Every fishing boat  is now in possession of a sonar buoy, which they attach to the bomb or sea-mine. The radar of the minesweeper is able to find the bomb quickly and take care of it. Since  the accident around six hundred bombs and sea-mines have been cleaned up.

Sailor Mark Bosgra descends into the waters of the North Sea, the ' tin' tied on to him. The 'tin' contains eighteen kilo of explosives, which will take care of 'bomb 594'.With only fifteen centimeter visibility the diver descends to thirteen meters, where the 500-pound bomb is laying. Arriving on the bottom he ties the 'tin' to the bomb. After about 10 minutes the diver crawls back into the rubber dingy, where two colleagues are waiting for him. They navigate  the rubber dingy about six hundred meters away from where the bomb is laying on the sea bed.From  the bridge of the minesweeper the 'tin' will be detonated ;after a life of sixty years resting on the bottom of the sea the end of 'bomb 594' came to an end. 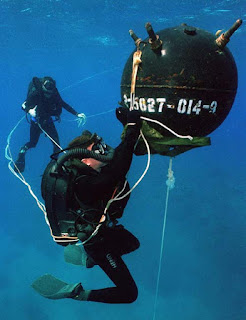 It seems unbelievable, but for every fisherman at the North Sea it became a normal day of life. Each boat weekly has an explosive in their net and the marine weekly detonate about six.

It still is scary when they have one in the net.They never forget what happened that day in April, now almost eight years ago. 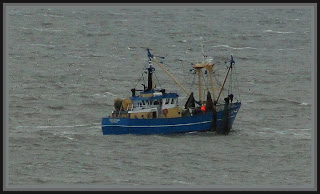 History will never be forgotten! There always be many memories from the past.These memories can never be erased, reminders of the past will always show up when you least expect it.